Home
Television
No Tomorrow
No Tomorrow Season 1 Episode 12 Review: “No Time Like the Present” 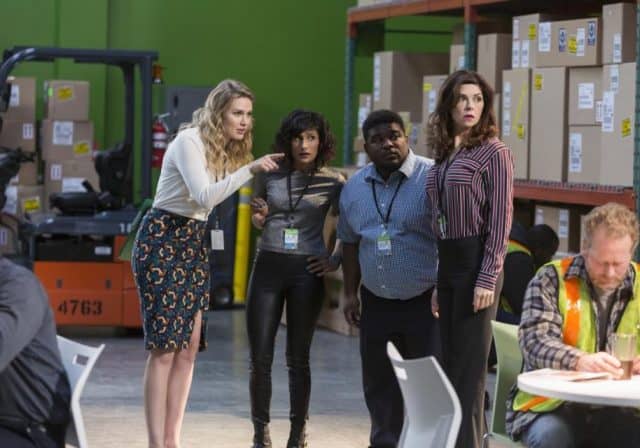 Well, that ending was a little dramatic, wasn’t it? If someone had told me back when No Tomorrow first began that there would be shady government agents and people knocking each other out with horse tranquilizers, I wouldn’t have believed them; it would have sounded too far-fetched, even for a show that’s about the upcoming apocalypse. And yet, somehow, the No Tomorrow writers make those final sequences work, as Jesse drugs Xavier and takes him away from Evie, just as her flight to Iceland takes off. Meanwhile, Timothy gets briefed on what exactly is happening with the planet-destroying asteroid that’s supposed to hit Earth (spoiler alert: Xavier’s theory is actually correct), and while that development might not be a full-blown shock, it still serves as a nice surprise to end the hour on as we prepare for next week’s season (and most likely series) finale.

But “No Time Like the Present” isn’t a strong episode of No Tomorrow just because of its ending. The whole episode reinforces the heightened reality that the series exists in, especially as we see Evie, Hank, Kareema, and Deirdre find ways to convince their CyberMart Tacoma counterparts to leave their jobs so that they can fill their positions after Cory Casey announces that the closing of their CyberMart branch. Using what Xavier has shown them throughout this first season, our favorite CyberMart employees are able to discover what their counterparts’ passions are, what makes them really love life, and they help these strangers achieve their dreams, no matter how strange they are. Is it far-fetched? Absolutely, but in an episode where Timothy is visited by secret government agents and Xavier has the opportunity to meet with the head of NASA, Evie, Hank, Kareema, and Deirdre being able to create a successful candle business for Frank, or find a position for Debra as an activities coordinator aboard a cruise ship, seems pretty tame.

Not to mention, what really makes “No Time Like the Present” work, in spite of its flaws, is how it shows just how much our characters have grown since the first episode of No Tomorrow. As I mentioned last week, Timothy’s evolution has probably been the most dramatic and impressive over the course of this show’s first season, but little moments, such as Kareema helping her counterpart, Carrie, find love, or Deirdre working alongside Evie, Hank, and Kareema instead of against them, prove that there’s been quite a great deal of development for all the series’ characters, both as individuals and in their relationships with each other. And by allowing us to see Kareema’s softer side or Deirdre’s more empathetic nature over the past few episodes, No Tomorrow is able to sell the bigger emotional moments in “No Time Like the Present,” in particular the scene in which Evie quits her job at CyberMart so that Kareema can take it and move to the Tacoma branch with Hank and Deirdre. Although I have some minor quibbles with Evie’s decision (we spent so much of this first season learning about how the CyberHugs position was her dream job, a place where she could really make a difference), her recognizing how much Kareema has evolved over the past 12 episodes and ensuring that one of her best friends doesn’t have to move away is both sweet and surprising and also a move that, in many ways, completely fits with Evie’s character.

Similarly, Xavier helping Cory Casey reconnect with his lost love, Loretta, is so fully Xavier, even if it appears that, at first, he’s doing it just so that he can talk to him about his theory. However, it’s been clear over the past couple episodes that Xavier doesn’t want people to live their lives more passionately because the world might be coming to an end; instead, his desire to see people taking risks and being happy comes from the joy and love he’s experienced with Evie. When he watches Cory meet Loretta for coffee, it’s as if he’s playing back the first encounters from his and Evie’s relationship and all the excitement and hope and nerves that came with it. Now, after spending months together with her, he understands just how important taking that risk with her was.

But will Xavier be able to win Evie’s love back after being a no-show at the airport, and where exactly is Jesse taking him? I’m guessing he’s bringing him to Houston to meet with the head of NASA, but you can never be too sure what Jesse’s up to. With No Tomorrow‘s track record, I’m not expecting any tragic or sad moments from next week’s finale, but I also don’t know if we’ll get full closure, since there are more than a few storylines still left up in the air. No matter what, though, I just hope the finale stays true to the show’s sense of optimism, which we’ve seen all throughout Season 1. That positive energy has not only allowed No Tomorrow to get away with some pretty out-there storylines, but it’s also made it one of the most refreshing and unique series on television, a show that, just like its characters, deserves to be celebrated for taking risks.

What did everyone else think about No Tomorrow‘s penultimate episode? Comment below and let me know.

No Tomorrow Season 1 Episode 12 Review: "No Time Like the Present"

Evie struggles to save her friends’ jobs, and Xavier learns whether or not his theory is correct in another strong episode of No Tomorrow.