Home
Television
No Tomorrow
No Tomorrow Season 1 Episode 10 Review: “No Soup For You” 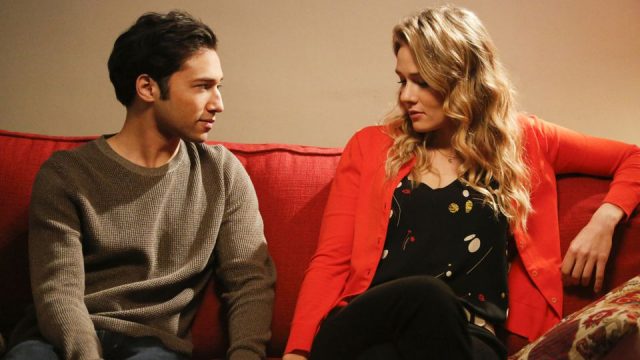 After a short Christmas break, No Tomorrow returns this week with a brand new episode, “No Soup For You,” which picks up right where “No Truer Words” leaves off. Evie confronts Xavier about his lying; not only has he been dishonest about his name but he’s also covered up his criminal past, and while Evie acknowledges that all this deceit comes from a place of fear rather than malice, she’s still not able to forgive Xavier for his lies. After taking some time apart, the two of them break up, with Evie using the last words she says to Xavier to call him out on his scared behavior; he encourages everyone else to face their fears but he won’t deal with his own, and until he does, how can he really, truly be living life to the fullest?

Evie’s words to Xavier finally prompt him to take action when it comes to confronting his dad. Xavier calls his father and gets him to come to Seattle so that the two of them can have a face-to-face chat. Through a couple of lines of somewhat clunky dialogue, we learn the painful truth of what caused the rift between the men: Xavier’s father left his dying wife for another women and started a new family, and by doing that, he also left Xavier alone to care for his mother as she slowly passed away. The conflict between Xavier and his dad has been hyped up as something truly terrible, something so major that it would perfectly explain why Xavier is the way he is, and this reveal lives up to that hype.

No Tomorrow doesn’t shy away from the betrayal and anger that Xavier feels every time he looks at his father (the show even has Xavier punch his dad in the face before they sit down to actually talk), but it also takes its time to showcase how truly complicated this situation with Xavier’s parents was. Rose’s conversation with Xavier, as she explains how she and Haymitch met and fell in love at a support group for people with terminally ill spouses, is just as important to the story and Xavier’s character as his interactions with his father are. No Tomorrow doesn’t try to simplify this complex issue into something black-and-white; Xavier isn’t 100% right and his father is 100% wrong, and the storyline all the better for it, as the father/son conflict rings true and their small attempts at repairing their relationship, whether it’s scattering Xavier’s mother’s ashes with fireworks or agreeing to talk on the phone once a week, feel earned.

Plus, while Xavier finally dealing with the emotional baggage he has with his father is satisfying in its own right, it’s also exciting to see how his character will evolve moving forward. Will he keep the same enthusiastic, carefree attitude he’s always had, or will he begin to mature a little more and understand that the truth, no matter how painful, has to be seen and heard? Is it too late for him and Evie to resolve things, or will his reconciliation with his father be enough to not only help him but also help his and Evie’s relationship?

That remains to be seen, but it will surely be a much more challenging situation now that Evie and Timothy have reconnected on more than just a friendship level. It was inevitable that No Tomorrow would bring back the love triangle between Xavier, Evie, and Timothy (love triangles are a staple of any romantic comedy), but as predictable as Evie and Timothy’s kiss at the end of the episode is, it doesn’t feel cheap or forced.

No Tomorrow smartly spends most of the running time of “No Soup For You” showing how much both Timothy and Evie have grown as individuals over the past 10 episodes: he’s more confident, thoughtful, and strong, while she’s more outgoing, creative, and resilient. We see this through their actions, whether it’s Timothy taking charge and using his newfound fame to get the two them on Grocers’ Blowout (and then also taking charge enough to answer the final question and win the game, ensuring that Evie will get souped), or Evie coming up with a brilliant and unique idea to help save CyberHugs. Both Evie and Timothy like themselves more now than they did in the show’s pilot episode, and their own feelings of self-confidence and self-worth, along with their romantic history, are more than enough to reignite the spark between the two of them.

With only three episodes left, I’m not sure how well No Tomorrow will be able tie up all its remaining storylines in Season 1, but it does fantastic character work Xavier, Evie, and Timothy throughout “No Soup For You,” which results in one of the very best episodes of the season. When this show is on its A-game, it’s one of the most entertaining and emotionally satisfying hours of television out there, and I hope that its final three episodes can match or surpass the quality of this week’s.

No Tomorrow Season 1 Episode 10 Review: "No Soup For You"

Evie and Timothy reconnect, while Xavier finally confronts his father in one of No Tomorrow‘s best episodes of the season.