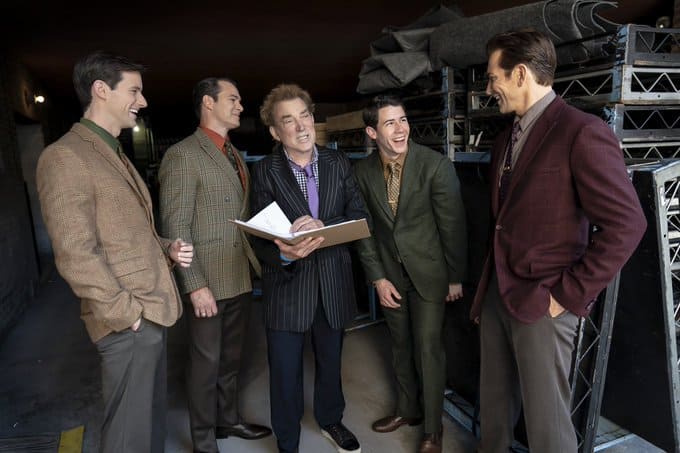 Nick Jonas shared a picture of him rehearsing his “dream role” in the new “Jersey Boys” TV musical event. The picture shows Nick in his role as Frankie Valli, along with CJ Pawlikowski (The Book of Mormon), who is playing Bob Gaudio, Matt Bogart who plays Nick Massi, Andy Karl who is Tommy DeVito, and director Des McAnuff. Nick wrote, “The past couple months I’ve been in Cleveland playing my dream role as Frankie Valli in Jersey Boys! With our incredible cast and crew, we worked tirelessly to create an amazing musical movie event for you all. Stay tuned for more exciting news.” In July, Nick posted an Instagram and TikTok video showing the first day of tech rehearsal for the musical. The video shows Nick in a large performing arts theater, with the music for “Sherry” playing. Nick looks at the camera with an excited face while listening, and he wrote, “First day of tech rehearsal for Jersey Boys!”

We still don’t know a whole lot about the production itself, other than what Nick has revealed. The original “Jersey Boy” – Frankie Valli – confirmed to the Today Show earlier this summer that Nick Jonas would play him in a TV adaptation of the popular musical. He said he and Nick actually talked about the role, and that he’s “very excited” to be portrayed by Nick Jonas. Frankie Valli is producing the TV movie, along with Graham King of “Bohemian Rhapsody,” and Bob Gaudio who was in the Four Seasons with Frankie Valli. It’s filming in Cleveland.

The past couple months I’ve been in Cleveland playing my dream role as Frankie Valli in Jersey Boys! With our incredible cast and crew, we worked tirelessly to create an amazing musical movie event for you all. Stay tuned for more exciting news 😎 pic.twitter.com/mRcgAW1x0z

We do know that the show will go straight to a streaming service, although we don’t know which one…or when. Nick seems to have some of the most important qualifications for the role already down. Although he was born in Dallas, he was raised in New Jersey so he should be right at home playing a Jersey boy. He’s also known for the high, falsetto notes he sings in some of his songs, a talent he’s going to need when he sings Four Seasons hits like “Sherry” and “Big Girls Don’t Cry.” The Jonas Brothers formed in 2005, and the group consisted of Nick and his brothers Kevin and Joe. They attracted notice from their Disney Channel appearances, including roles in the Disney original movie “Camp Rock” and its sequel. They also had their own Disney Channel series for two seasons. The group broke up in 2013 after recording four albums together and the brothers pursued their own projects for a while. They reunited in 2019 and released the song “Sucker” along with an album a few months later, “Happiness Begins.” Nick has also recorded two solo albums.

This won’t be Nick’s first foray into playing a Broadway role, either. Most recently, he starred in How to Succeed in Business Without Really Trying, and when he was younger he was Chip in Beauty and the Beast and Little Jake in Annie Get Your Gun. He’s also done some on-screen acting, and appeared in “Jumanji: Welcome to the Jungle,” “Chaos Walking,” and “Midway.” He was a coach on “The Voice” for two seasons, and has hosted and performed on “Saturday Night Live.” He and his brothers are currently on tour this summer (when he’s not filming), and they have concert dates scheduled through the end of October.

“Jersey Boys” first premiered on Broadway in 2005 and closed 12 years later. John Lloyd Young, who played Frankie Valli for two years, won a Tony Award. He also played the role in the “Jersey Boys” movie, which was directed by Clint Eastwood and opened in 2014. Frankie Valli and Bob Gaudio were executive producers on the movie, and Gaudio composed the film’s music. Streaming musicals have been a popular genre lately. Lin Manuel Miranda‘s “Hamilton” has been on Disney+ for over a year and fans love being able to watch it there (and love making fun of Jonathan Groff’s spitting when he plays King George). “The Prom,” an original Netflix production, stars big names including Meryl Streep, Nicholle Kidman, and Andrew Rannells. Lots of musicals are also being adapted for the big screen. “In the Heights” came out over the summer, “Dear Evan Hansen,” “Respect,” “West Side Story,” and several more are set to be released soon.

There were also several musicals that were performed for live television in the past few years including “Grease,” “The Sound of Music,” and “A Christmas Story.” Frankie Valli is staying very busy meanwhile. He’s currently on tour, and has concert dates scheduled across the country (and even across the pond in the U.K.) all the way through the summer of 2022. He’ll be performing with The Four Seasons and singing some of their classic hits in “An Evening With…The Original Jersey Boy Frankie Valli And The Four Seasons.”