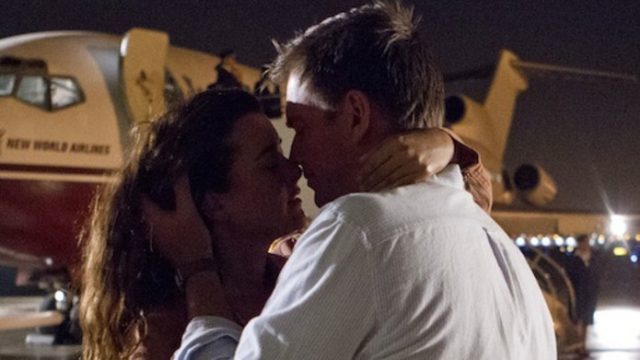 NCIS set Special Agent DiNozzo on a new path as a fitting tribute to the character, and his portrayer of thirteen seasons Michael Weatherly. At the end of the episode DiNozzo left of his own volition, and as we suspected, it had everything to do with Ziva; though not in the way we all thought.

NCIS had just realized that their enemy, the true person who shot Fornell, was actually former CIA agent Trent Kort, someone they thought they could count on as an ally. Instead Kort continued to try to cover his tracks, which concluded with files Eli David had stashed away. Tony is all set to go find Ziva, until Director Vance gets a call from Tel Aviv. There is no doubt now that Ziva has died. The entire team is devastated at the loss of their friend, and DiNozzo’s grief is beyond words. He is flooded with memories of Ziva as his shock and rage build up and overflow.

Tony focuses on seeking justice for Ziva until he gets a visit from Mossad Director Elbaz. Initially Tony berates her for not saving Ziva, but he stops cold when she explains the real reason she has come. There was a survivor pulled from the rubble of the fire, and that survivor is Ziva and Tony’s 2-year old daughter. I honestly didn’t know whether to gasp or cry at this point. Tony could go round and around over why Ziva didn’t tell him, but that’s not what’s important right now. What’s important is that Tali’s entire world has been ripped out from under her, and it’s up to her father to fill the void.

Tony and Tali actually get along well very quickly. He distracts her from all of the trauma she’s been through as he’s filled with even more memories of her mother. It’s funny to see McGee ask Tony if he and Ziva were actually together the whole time they were partners in NCIS. Tony describes them as a short love story with “obviously a fond farewell”. You can tell Tony is trying to keep his emotions in check so that he can focus on his daughter, who has been uprooted to live with a perfect stranger. However Tali knows exactly where she is. A photo of Tony and Ziva was tucked away in Tali’s things, and Tali points to her parents as “Imah” and “Abba”, Hebrew for Mom and Dad. Tali knows she’s safe because she knows she’s with her father. Guess Ziva wanted to make sure her daughter knew who would always look after her. Tony returns the favor by giving Tali Ziva’s Star of David, so that her mother will always be with her.

The team is able to track Kort down through a complicated sequence of steps stemming from Kort’s proximity to low levels of radioactive mud. Tony comes to a realization right before he and NCIS kill Kort (seriously, the guy deserved every one of those bullets). In the end he didn’t care about Kort, he only cared about his daughter. Tony alone is responsible for Tali now. He can’t make the job a priority anymore since his daughter has to be his priority. For the good of his family, Special Agent Anthony DiNozzo says his goodbyes and leaves NCIS.

Sound off: Was killing Ziva David the right decision? Were Tiva fans left satisfied? Which part of Michael Weatherly’s farewell episode was the biggest tearjerker?