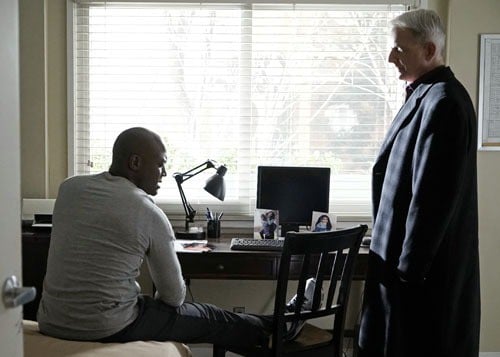 Tonight’s episode of NCIS marks a milestone in the show’s history which rarely happens in television. Only a select few shows can say they’ve made it to this point, and none of them can say they’ve done so as the #1 Television Drama Worldwide. In tonight’s episode, entitled “Scope”, the team will ask for help from a marine with PTSS, and his aid will go beyond the case of the week.

Taye Diggs guest stars as Aaron Davis, the lone surviving Marine of an ambush gone horribly wrong months prior. Since then he has been receiving treatment for PTSS. Every moment of that awful day which changed his life he will have to relive when Agent Gibbs needs his help. As much as Gibbs will need Sergeant Davis’ help, their interaction will bring up a lot of emotions which Gibbs has been struggling with for more than a year.

If you need another reason to tune into the landmark episode, it features a special performance by the MusiCorps Band, which is part of a music rehabilitation program for wounded veterans. Their music will not just be a one-off, but will be an integral part of the entire hour. Taye Diggs will sing a rendition of “Hallelujah” with some which was recorded specially for this episode.

“Scope”: The NCIS team re-examines an ambush on a group of Special Ops snipers in Iraq after an American couple is attacked in the same area six months later. When Gibbs discovers he needs the account of the lone survivor, Marine Gunnery Sergeant Aaron Davis (Taye Diggs), he tries to connect with the wounded warrior who is being treated for PTSS at Walter Reed Medical Center, on the 300th Episode of NCIS.

Tune in tonight for this special episode on CBS.