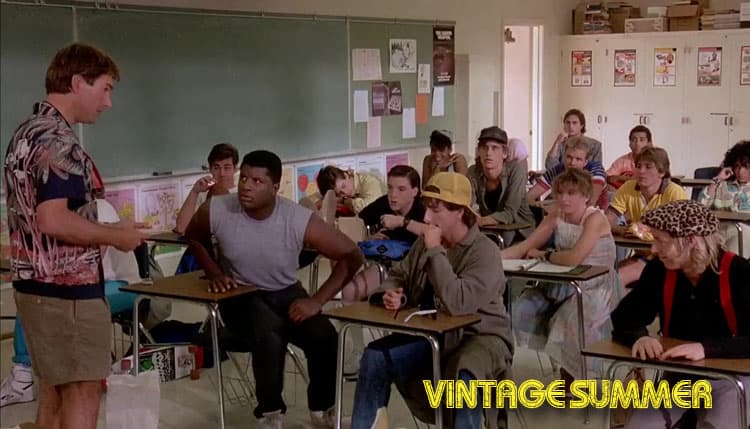 The 80s definitely produced a lot of awkward but also fun movies, and Summer School was one of those that had a few rising stars and a few established names in it that made this movie a great deal of fun. If anyone can still remember Mark Harmon as a younger man, this is one of the movies that shows him being a fun and carefree individual before he went all Leroy Jethro Gibbs. Don’t get me wrong, Gibbs is an iconic and awesome role, but the guy wasn’t written to know how to have fun all that often since he’s all about his work. Freddy Shoop, on the other hand, Harmon’s role in this movie, was about anything but work. This was the kind of teacher that was looking forward to the summer just as much as the students were, and was fully ready to just kick back and cut loose, even if all that really meant was sitting on his back porch with his dog or relaxing on the beach and catching a few rays. But when Shoop is selected by the vice principal to teach summer school to a class of rejects, it’s a serious bummer that he’s not ready for.

As it turns out, he’s not ready for any of it since the students are all in summer school for reasons that are good to absolutely ridiculous. To be fair though, this movie is one of the great products of the 80s that was a lot of fun since it did manage to get dramatic now and then without getting too deep, and it turned on the laughs in a manner that was kind of gross at times but was still spontaneous enough to be enjoyable. The whole point of the movie was to show the level of growth that both Shoop and his students would go through as he learned how to be an actual teacher and the students learned what it was like to accomplish something.

This is shown near the end when the test scores that each student needed in order to achieve passing grades were revealed. While not all of the students managed to pass, it was still shown that thanks to Shoop, each student did show a great deal of improvement as evidenced by their test scores. One thing about teaching, in any movie that ever shows the profession, is that it is important and it can make a huge difference in the lives of those that a teacher touches throughout their career. Shoop definitely wasn’t the greatest teacher in movie history, but he did manage to become a very influential individual during the course of this feature since the students were shown to actually stand up for him at one point in order to get him back to work. As far as rebooting this movie goes, it does feel that it might be a touchy subject, but also one that could be entirely successful if the director that had the nerve to take it on could find the right actors and stick as close to the source material as possible. Granted, it would need a serious amount of updates to really come across as something that kids would identify with, and it would be best to work with younger actors since the idea of bringing in people in their 20s and older, which is common practice, kind of skews the whole idea of the movie.

But it’s a belief that there is someone out there that’s just as good as Mark Harmon and could possibly take the lead in this movie if they were given the chance, and it might even be nice to see if Harmon might want a cameo in the movie or a solid role to work with. Anything but the vice principal might be nice since seeing Harmon as a pain in the backside isn’t really something a lot of fans might want to see. But a reboot would also be best if it picked up a bunch of aspiring actors as well to play the roles of the students, actors that haven’t yet found their groove and are looking for the right opportunity to show what they can do.

Some might want to argue against rebooting this movie since it’s true that not everything needs to be touched. But there are times when good ideas and gems such as this might need to be polished a bit and given a new look or another chance to entertain people that they didn’t receive in the first place. Plus, it was such a fun movie that seeing what could be done with it again might be a great deal of fun and, if possible, remind people that the movies of the 80s were actually quite interesting and engaging.