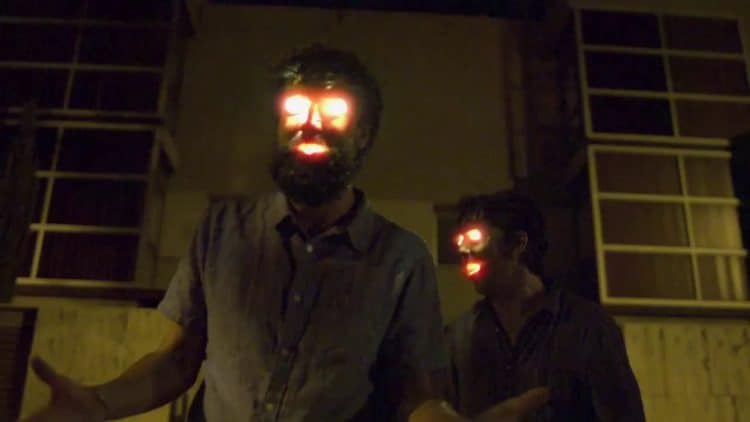 The found-footage style of filming has been popular with many people for a while, but V/H/S has allowed it to ascend to a slightly different level over the years as the four movies that have been released have gone and done something that many of the others have not, which is to create a series of movies that have appeared to be barely connected by one framing narrative after another but are shown to have a grander purpose in V/H/S: Viral. The framing narrative in this movie deals with Kevin, a young man that enjoys filming as much as he can to make his mark in the world. When he notes a high-speed pursuit in progress on TV he also notes that it’s in his neighborhood as he and his girlfriend Isis wander outside. Isis, who has grown tired of Kevin’s desire to film her all the time, wanders off in a daze, while Kevin attempts to follow the ice cream truck that is being pursued by the police. Things happen fairly quickly as a cop is struck down by the truck after instructing Kevin to stay out of the road, which eggs Kevin on when it comes to following the truck.

The transition into the stories that make up the bulk of the movie is a little rougher as people begin to receive videos depicting the different tales on their phones and other devices as the movie progresses, telling first the tale of Dante the Great, who is an illusionist named John that lives in a trailer park and, before obtaining a cloak that supposedly belonged to Harry Houdini, is kind of a nobody. But when he puts on the cloak and begins to use it, his fame grows in leaps and bounds as he finds that the cloak gives him access to true magic. The trick, unfortunately, is that the cloak needs a human sacrifice so that the magic can keep working. When John gets a little too convinced that he’s infallible though, and when he’s gone through a few too many assistants, he becomes arrogant enough to think that he can’t be stopped.

Eventually, his latest assistant turns the tables on him and the cloak consumes John. When she tries to get rid of the garment, however, the cloak appears in her closet and consumes her when she inspects it. Back in the framing narrative, Kevin and three cyclists that he met up with have been chasing the ice cream truck, and one of them even gets stuck on the bumper when he gets too close and is dragged behind the truck until his feet are worn down to the bone, literally. The next story that is rolled out is even stranger as it deals with parallel dimensions in which a man named Alfonso opens a portal to a parallel dimension. Upon meeting his counterpart in this dimension, the two decide to switch places for 15 minutes, but the main Alfonso finds that the world he’s stepped into is a little too strange for his liking, especially when he finds that two men his wife invited into their home have glowing eyes and mouths, and monstrous creatures for penises. Worse still is what’s revealed by the other Marta, his wife, as she exposes herself and reveals a monstrous opening in her body.

It shouldn’t be amusing, but it kind of is when it’s revealed that the main Marta, having been attacked by the other Alfonso, stabs the main Alfonso, thinking that he’s the monstrous version that she just chased off with a knife. This movie only gets crazier as the next framing segment pans to a party being held for a Latin gangbanger that’s just been released from prison. But when the music coming from the radio changes to a different tune the gangbanger stabs everyone at the party shortly before the next story is rolled out, as a small group of skaters ends up visiting a location that’s been marked up with several different strange symbols that are, as it’s revealed, the markings of a cult that’s been trying to raise a monstrous creature from the depths. As the cult members attack the skaters, only two of them end up escaping as they first kill the cultists and then explode the skeletons that arise once the cultists are killed. In terms of being one of the craziest movies in this series, Viral is by far and large one of the nuttiest.

At the end of the day though it does tie the other two movies that came before into the mix and create what could be called a successful attempt at the grand design that’s finally laid out for everyone to see. Trying to top this feels like it would be insanely difficult, and perhaps even impossible, but this could be why the next movie was a reboot. Where this idea goes from here is anyone’s guess.