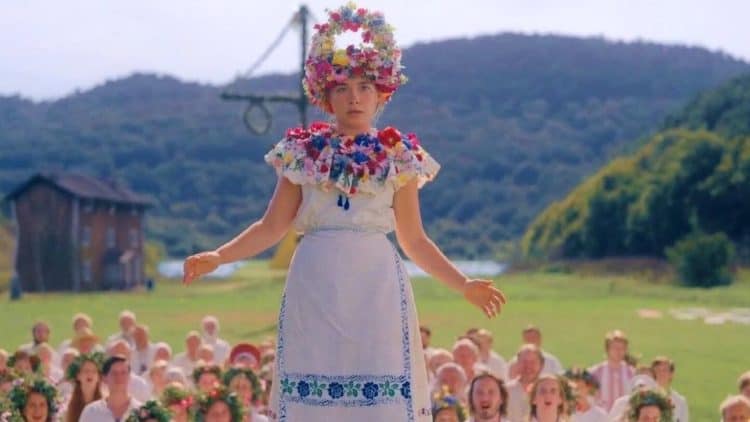 It’s been a few years since this movie came out but as it’s seen to happen, people tend to get around to watching various movies and shows at their own pace. Midsommar is one of those that some people were excited to watch, and others looked at and decided that it might be worth shelving for a while, if only because this looked like a slow-burn type of thriller that might not offer a great enough payoff in the end. Well, the unfortunate truth is that yes, it is a slow-burn type of movie, and it’s something that requires that one pay attention to the broader strokes of the story, while hopefully taking in the finer details that can flesh out the tragic tale that is meant to be an interesting retreat from the world that many people understand. The tragedy that occurs when Dani’s family is found is dramatic, but connecting it to the trip that her boyfriend Christian, and his friends, are taking to a commune after being invited by their friend Pelle, is kind of awkward.

This is only compounded by the fact that Christian was apparently going to call things off with Dani as he comes off as kind of a self-centered individual that’s out to do what’s best for himself, without caring how it affects others. On their way to the commune, however, the group ingests psychedelic mushrooms that cause them to suffer through a bad trip, which makes Dani hallucinate about her family. Not too long after this, the group reaches the commune, where they’re welcomed in and treated well by the inhabitants. There’s still the feeling of something being off in this place, something that isn’t right, but many might have chalked it up to the fact that different civilizations view one another through a variety of lenses that are hardly ever favorable to the culture being viewed.

That’s made insanely evident when Dani and Christian, along with two other tourists from England, gather along with the residents to view the ritualistic suicide of two of the commune’s elders. Things get even worse when one of the elders doesn’t die right away and has to be mercy-killed with a heavy mallet. Needless to say, this is a lot to take in, especially when it comes to the fact that this isn’t something a lot of people believe in. As one might expect, the suicides, which are justified by the village elders, are just the beginning. One of the college students, Josh, at least appears to be respectful as his thesis on different cultures gives him the chance to be accepting of the commune and its people, but he pushes things past the line when he asks to photograph the sacred text that he’s shown. Of course, his attempt to photograph the text late at night isn’t quite as bad as Mark urinating on the sacred tree within the commune because he can’t find anywhere else to go. The result is about the same since both friends are killed, though Mark is lured away first, and his skinned face being worn by one of the residents is the last thing he sees before he’s finished off.

From there, things just get weirder and more disturbing since while every kill is pretty much expected throughout the movie, especially since bucking against the trend in a thriller is a sure sign that a character is about to be knocked off or somehow turned into the survivor. Dani’s place is already secured since she’s been set up in this manner, meaning that she’s been a focus when she needs to be and is set aside when it’s necessary. As far as the others, they come and go when the moment requires it, and they’re taken out when it’s time. But the overall story is still all kinds of disturbing since as it continues forward, Christian becomes even less of a sympathetic character and ends up becoming someone that’s easily reviled as he’s propositioned for the chance to mate with one of the young women in the commune, which he is eventually lured to while Dani is being taken through a ceremony after winning the maypole ceremonial dance.

If one wants to feel out of place and completely confused, this is a great movie for that, but otherwise, it is a very slow-moving movie that doesn’t deliver a huge payoff at the end. It is a great idea to be certain, and it does feature several moments that are great enough to make this movie worth watching at least once or twice. But seriously, trying to claim that this is a secretly great movie that deserves a great deal of introspection is a subjective matter that some might agree with and others might vehemently disagree with. In short, Midsommar wasn’t the best of movies, but it’s far from the worst.