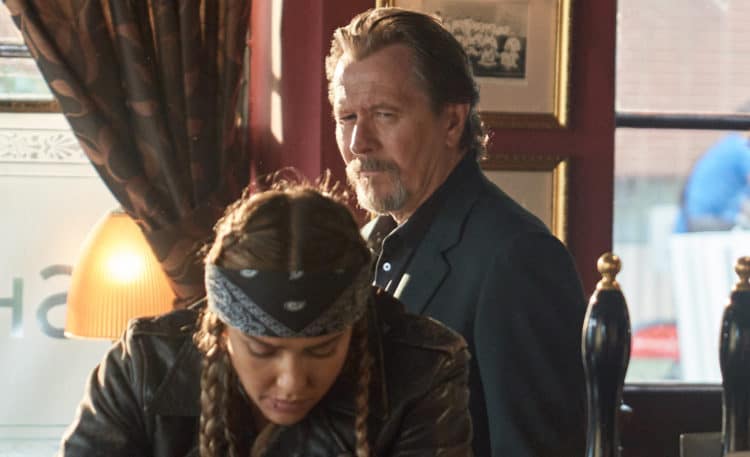 Does anyone else get the idea that anytime the CIA is mentioned in a movie they’re either given a dangerous or bad reputation? It could be that whatever they deal in, be it information as it’s been claimed, or other matters that they’ve been associated with, their reputation is simply mired in controversy no matter who asks. In Killers Anonymous it becomes even more difficult to figure out since the backgrounds of the various characters and the surprises that are revealed within the course of the movie tend to be kind of difficult to absorb, especially before the next one comes along to muddy the waters again. Gary Oldman plays a very hands-off character that sits on the periphery of the story for the entire time, while the other actors play their roles and become likable or downright despicable. Unfortunately, the latter is far easier to feel than the former, as the crosses and doublecrosses that occur in this movie make it quite clear that no one has the full story and everyone is expendable at one point or another.

The story about a senator that needed to be wounded, not killed, to make a certain point is what drives this dog and pony show, but the characters that are introduced to the Killers Anonymous group feel a bit contrived at times but a little too deep to see through without a proper backstory at others. In other words, they feel like people who have something to hide but reveal themselves through different renditions of a story that don’t make sense to start with but start to show who they are and what their motivations are. There are enough mysteries in this group to fill an entire series of novels, but at the very least there is enough interest inherent in this story since there’s something to be unveiled that’s lurking just beneath the surface.

The initial confrontation between two assassins in this movie is kind of a surprise as Jade, played by Jessica Alba, is taken out rather quickly as she sticks around longer than she’s supposed to and is penalized for it, meaning she’s taken out after a particularly brutal fight. It’s tough to say which assassin is the least likable since Krystal comes off as a bit of a pain in the backside while Jade is, well, not quite as bright as one would hope. But when Krystal ends up canceling Jade it’s still kind of surprising since one would imagine that Alba might last a little longer into the movie. She’s not the first recognizable star to be taken out early in a movie though, so it’s not too hard to move on without her, as she’s mentioned once or twice before the movie is over. In the meantime, the group introduces a few characters that are kind of interesting, and a couple that are less so. Listening to the stories that they have to tell and experiencing the mistrust that they share for each other, it’s tough to tell who’s going to be standing at the end and who’s going to be revealed as a problem that needs to be sorted out.

As things move along and the individuals continue to sort each other out, the unknown facts start to emerge and things start to happen that make it clear that whatever a person thought they knew wasn’t bound to hold out as a fact. The point of keeping things secret and then dramatically revealing them appears to be alive and well in this movie as each character continues to keep themselves at arm’s length from each other. But when the group leader, Joanna, starts to unveil more and more about the failed attempt on the senator’s life, the tale begins to narrow in as those that are vital to the main theme start to be revealed, while the others become little more than tagalongs that are there to be disposed of in due time. Once that time comes though, it’s still a bit of a surprise as those that are left standing simply execute those that aren’t meant to move on. Once the main theme of the story is understood, however, it’s still mildly confusing.

Out of the many movies that deal with spies, assassins, the CIA, FBI, and other government agencies that sanction killers, this movie is one of those that feels as though it skims the surface while hiding away the true purpose. By the time the purpose is found out through the story is on the move and people have to guess once again what was really happening and what the overall purpose was. It’s a strange but interesting story, but it’s also one that manages to get the attention of many people no doubt since the title is interesting enough. The story, well, that’s for the viewer to decide.