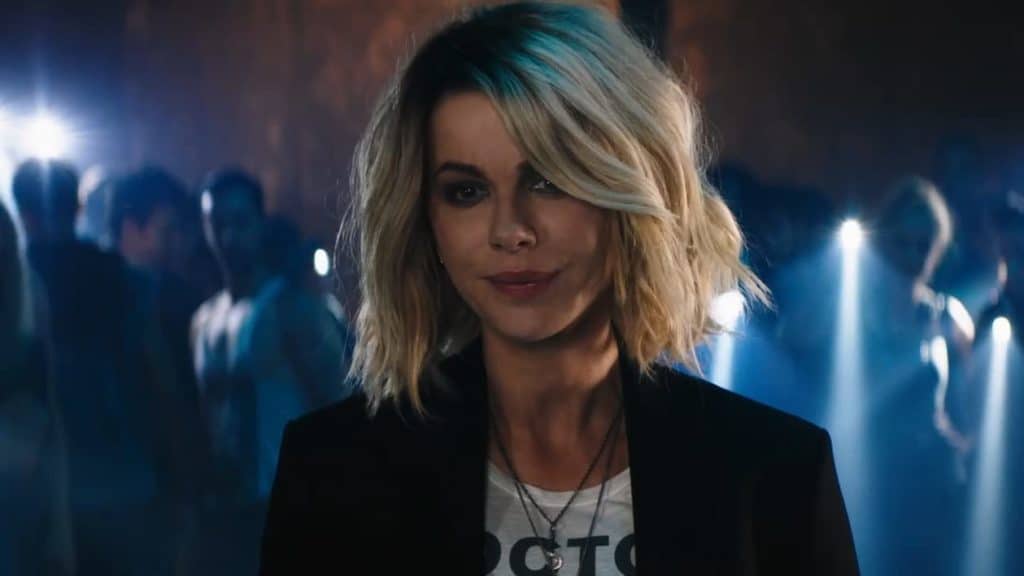 A lot of us have had those moments in life when we wanted to lash out at something or someone in a moment of anger or just because we were insanely annoyed, but more than a few individuals find the means to pull that impulse back thanks to the fear of repercussions that tend to come in one form or another. Lindy, played by Kate Beckinsale, doesn’t have that mechanism, and tends to lash out uncontrollably, and has since she was a young girl. Her life has been little more than a series of tests, outbursts, more tests, and even the loss of her family as her mother and father couldn’t control her and eventually gave her up. In fact, the only thing that appears to work is  shock vest that she wears constantly and can use with a handheld button when she starts feeling agitated. The shock effectively neutralizes her even if it doesn’t make the feelings of irritation go away, thereby making it safe for her to be around other people without trying to cause anyone bodily harm. Of course, it doesn’t always work like its expected to.

In the early part of the movie the audience gets to watch as Lindy attempts to go on a blind date, which, for someone with severe anger issues coupled with a mild case of anxiety, doesn’t sound like a great idea. She does manage to make it to the table, and she even sits down to order dinner, but when the waitress proves to be insanely rude she has to excuse herself. Worse, when she hears the waitress badmouthing her date to someone on the phone in the ladies room, she snaps. Trying to calm herself down doesn’t work and before she knows it, Lindy is slamming the waitress around one of the bathroom stalls like a rag doll.

She does reconnect with the date later on, as Justin, played by Jai Courtney, proves to be a nice guy and someone that can calm Lindy down without the use of her shock vest. But, as one might have guessed, this happiness can’t last or there would be no movie. When two detectives tell Lindy that Justin was found dead in his apartment she goes on a rampage, seeking out Justin’s killer and alienating herself from the police despite their attempts to calm her down so that they can help her avoid making any costly mistakes. When the criminal organization that Justin apparently worked for becomes aware of Lindy’s involvement, things get even more tense as Lindy has to seek help from any quarter she can, including her psychiatrist, played by Stanley Tucci, who is also the man that came up with the idea for the shock vest she wears. In short, this movie is another action feature designed to make Kate Beckinsale look as awesome as possible, but unlike her other action roles she’s a little more out of control in this one and more prone to becoming a person driven by rage rather than reason. This is kind of proven during each fighting scene since instead of thinking her way around a problem she does get roughed up a bit before she bulls her way through each situation.

There is a bit of a twist to the story that people are bound to see coming since it’s happened in many other movies over the years, since eventually (spoilers) it turns out that Justin is not dead, and has been manipulating Lindy to get to a top crime boss that he was attempting to take out. Much like a self-satisfied villain he goes on to describe how easy it was to gain Lindy’s confidence, how simple it was to figure her out, and along with her psychiatrist, how horribly easy it was to adjust her vest to a level that would incapacitate her rather than just calm her down, which Justin does as he’s explaining his whole nefarious plot. There’s one problem though, and that happens to be the fact that after existing with the vest for so long, Lindy managed to build up a resistance to the pain, and in a surprise move she turns the tables on Justin and leaves him holding a parting gift that she’d made for the crime boss he was after. Lindy manages to escape just as the bomb she fashioned goes off in Justin’s hands, killing him and blowing the entire top floor of a skyscraper apart as she makes her getaway. This movie can’t exactly be classified as one of the best, but it was entertaining for what it was. Kate Beckinsale comes off as a woman that’s constantly on edge, while Jai Courtney takes another turn as an over the top villain that’s just barely believable as a nice guy. In fact, the best performance in this movie was probably by Stanley Tucci thanks to his dry, sarcastic wit that’s actually kind of nice when it’s on display.