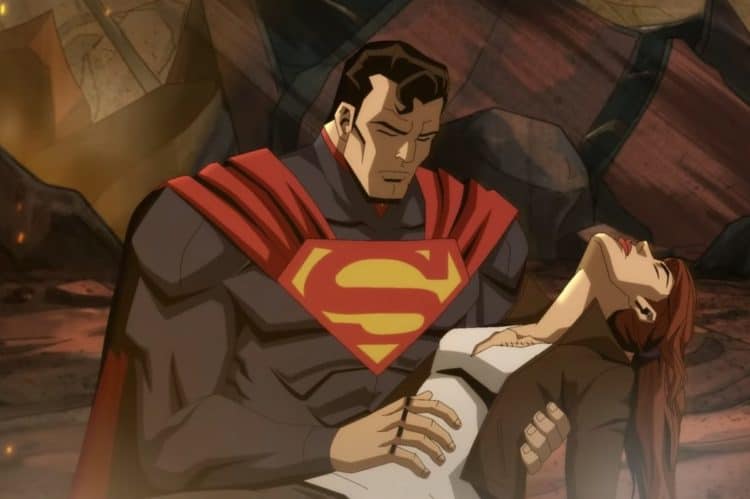 The question of what would happen if Superman used his power to dominate rather than to help humanity has been present for a long time, but the Injustice animated movie answers this in part since it becomes kind of obvious that when the man of steel is ruled by emotion rather than reason, his mere presence can be more terrifying than many other heroes. This particular story has been a favorite of many fans and it’s also been put up for debate considering the direction it goes in with the heroes and the villains that are depicted. If this movie desired to show people the dark side of what can happen when heroes are forced to fight each other, then it did a great job of highlighting the brutality that such figures can display. Of course, it did a fair job of displaying how desperate the Joker had become since Batman wasn’t going to react in the manner he wanted. So, why not go after the ultimate boy scout of the Justice League and push a button that was best to leave alone. Hey, no one ever said the Joker was blessed with wisdom.

But he’s always been capable of digging into someone’s psyche to find something that he could use to manipulate those he decides to have ‘fun’ with. The fact is that Batman has, over the years, learned how to deal with the Joker and not be manipulated by him. But Superman is, for all intents and purposes, not the same type of person as Batman is, as he’s not as cynical or secretive. He’s also not as used to the Joker’s antics since he hasn’t dealt with him as much. That’s why Injustice is actually kind of effective in showing that Superman does have a very big weakness that he can’t shore up since he can’t do with her: Lois Lane.

Out of the few weaknesses that Superman has, Lois is by far the one that he’ll do pretty much anything to protect since he’s gone to great lengths to make certain that she’s safe in the past, and yet, somehow, the Joker and Harley Quinn made certain that things would go as they wanted while causing the most destruction they could manage in a short amount of time. The bomb that decimates Metropolis is only a precursor however, as the deaths that lead up to it are just as important as not only does the Flash end up being killed, but by using Scarecrow’s toxin mixed with kryptonite, the Joker forces Superman to think that he’s fighting against Doomsday, which prompts him to send the monstrous villain rocketing into orbit. The only problem is that it’s too late by the time Batman and the others realize what’s been accomplished with the toxin, as Clark finds out that, to his horror, he’s attacked the love of his life, Lois Lane, and has killed the child that was growing within her as well. This pushes Superman so far over the edge that he has no trouble making his way to where the Joker is being held, murder in his eyes and justice on his mind.

The problem with this is that Superman doesn’t stop there as begins to deliver his new brand of justice to the rest of the world after deciding that he’s going to stamp out criminal actions wherever he finds them. Wonder Woman is on board immediately as her idea is that heroes have been too soft on criminals over the years. It’s tough to argue with her when it comes to the admonishment she gives Batman since while killing every villain wouldn’t be a great way to solve the problem, his inability to pull the trigger on confining the Joker to death or to a fate that’s as close to it does appear to be why bad things continue to happen. In fact, at times it almost feels as though Batman locks people away to have something to do, a reason to justify his continued existence as a vigilante. But that’s an argument for another article. At the end of the day though, Injustice almost feels as though it’s incomplete, as though it could have taken a bit more time to flesh out the characters and invite another few situations that might have helped to broaden the story.

Watching the heroes fight each other is brutal since, at one point, Superman’s resolve breaks down just enough that he decides to trust Ra’s al Ghul, which is a horrible decision obviously since Ra’s has designs on betraying Superman without question. But when another Superman from a different earth is brought to confront this man of steel, it doesn’t do much except incense him further. When another Lois Lane is brought to Earth-22 however and reveals that she lost her Superman, but is still pregnant with his child, Superman finally realizes the folly of what he’s done and allows himself to be imprisoned. The movie does feel as though it’s over a little too quickly, but it does make several points concerning the DC heroes and how their beliefs differ in a few ways.