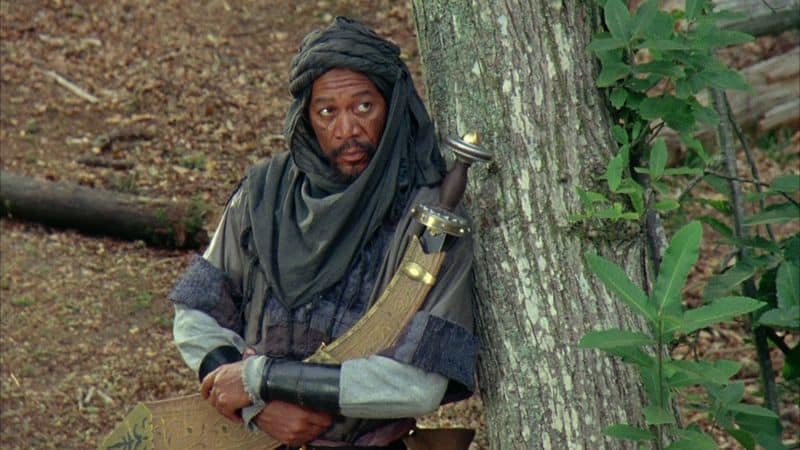 It’s amazing to think that it’s possible with action movies, but sometimes the sidekick can actually be a better, more convincing character than the star of the movie. Sometimes it’s by a slim margin and even by design, but it does happen. It happened more often in the 90s than people appear to think since there were plenty of sidekicks that were actually easier to follow and even cheer for than the stars sometimes. It was a conditional thing of course since the stars would be pushed out in front more often than not, leaving the sidekicks, well, at their side, or behind them. In some cases the sidekicks were vital, and in others, they were kind of just there, which means that they didn’t really outshine the stars at all. But when a sidekick did manage to overshadow one of the stars it was pretty obvious since all of a sudden the sidekick felt like the main character, even if it was just for a moment.

Here are a few times that the sidekicks managed to look better than the stars in action movies back in the 90s.

This is that slim margin I was talking about since Jean Reno was great as Leon, but he was still overshadowed a bit by Natalie Portman, who put in a great performance as her attitude, her emotions, and her determination to show Leon what she could do was relentless. She was just a kid at the time, but she put in such a great performance that one can’t help but be utterly impressed since she was able to take control of one scene after another and make it work in a way that had people sitting with their jaws hanging open. Of course, it could have had something to do with the fact that her character was trying to do more than be grateful to Leon for saving her life.

Jeff has this ability in just about every movie since he has what appears to be a manic style of acting that is actually quite calm but so intense that it’s impossible to ignore him for any amount of time unless one really tries. In Jurassic Park, there were several very talented actors at work, and yet he was one of those that people remember the most, partially because of his time spent with his shirt open, and another part because of the manner in which he kind of fills up the screen with his presence and his overall attitude. Seriously, the guy doesn’t have to shout or even raise his voice, all he has to do is talk.

3. Gene Hackman – Enemy of the State

Yes, it is possible to overshadow Will Smith since in this movie he was constantly acting the part of the fool since his character had no idea what was going on and why he was being targeted by a clandestine agency for possibly possessing information he had no knowledge of in the first place. But Gene Hackman kind of just walked on the set and took over in a very calm and controlled manner that Smith had no choice but to follow since Hackman’s character was the expert and more importantly, he had knowledge of what was going on, and once he figured out why he became very dangerous.

When Michael Keaton breaks bad you know it because the guy is an absolute animal. Even calm, controlled and composed, he’s still able to give off an aura of danger that in this movie serves him well since he plays the part of a killer that happens to be a perfect match to be a donor for a cop’s kid. Andy Garcia is a great actor, and this isn’t meant to take anything away from him at all, but he can’t measure up to Keaton in this movie, since the fact is that Keaton is utterly ruthless and doesn’t stop from start to finish. Garcia is good, but he’s not a match for Keaton in this movie, especially in terms of attitude.

People might actually laugh at this, not because it isn’t true, but because it IS true. Kevin Costner was supposed to be the legend in this movie, and somehow, Freeman turned up the charm and the acting ability and ended up being the guy that was essentially why the people finally turned to fight alongside Robin Hood instead of heading out and letting the people in charge breathe a sigh of relief. Plus, his delivery and the things he said at times were perfect, such as the moment when Costner berated his character for not helping him during a battle, the quote “You whine like a mule! You are still alive.”, is just classic.

Don’t ever discount the sidekicks.

The Frat Pack’s Lowest-Grossing Movies Of All Time