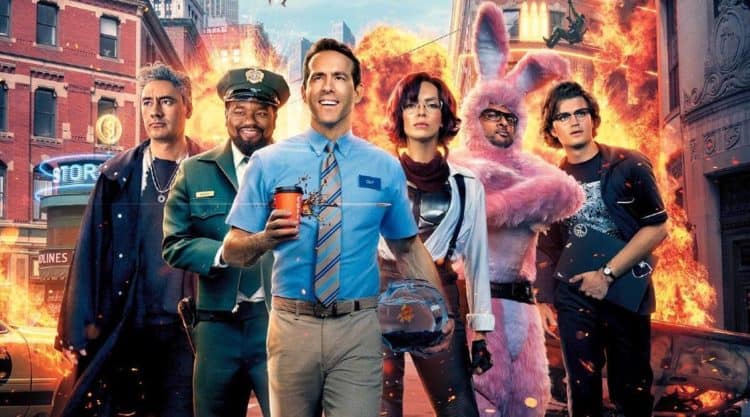 It’s not that often that gamers think about NPC’s, but it’s something that a few people might have considered a time or two. NPC’s, non-player characters, are programmed in certain ways to help the game move along and to interact with the players to give them something to do, such as side missions and pertinent plot points in the story. But other than this, NPC’s aren’t given a lot of consideration, and yet they’re written in for a specific reason most times since they are a part of their game and they do have a purpose for being there. Of course, not all of them are going to show their world and the world outside the game that they’re capable of evolving and becoming self-aware like Blue Shirt Guy, or rather, “Guy”. Some folks might have loved this movie and others might have felt it was kind of silly, but there is a point to it, even if does kind of feel like a point that’s bound to spark a debate about morality that’s kind of, awkward.

It’s pretty accurate to say that people acting out their fantasies in video games is rather normal. After all, there’s a reason that a lot of fans love the naked aggression in games like Mortal Kombat and the no-consequences play of Grand Theft Auto. Folks get to act out their innermost fantasies in the video game world, and if it’s a world where they can interact with other players and stomp all over the NPC’s, then so much the better. But Free Guy takes a magnifying glass to that behavior when Guy becomes aware of something different in his world, which is by design since two individuals whose idea was stolen and hidden away in the game by Millie and Walter, who created the source code for a game called Life Itself, which was absorbed into Free City by Antwan, the villainous boss that takes full credit for Free City while doing very little other than hyping himself up.

When things really start to happen, Guy forms a romantic interest in Millie’s online character and begins to level up, meaning that he gets stronger, wiser, and far more experienced as eventually, Walter reveals to Millie that Guy is a true AI and is learning how to navigate the game, something an NPC is typically not programmed for. As a result, many of those playing the game, including Walter, Millie, and their friend Mouser, think that Guy is a hacker that has somehow jacked into Free City and is mucking about. But when it’s understood that Guy is an NPC that’s become aware it changes things quite a bit as Antwan has the game rebooted to erase Guy’s memories and turn him back into a compliant NPC. Millie reverses this by kissing Guy, which is not a normal function available in the game. This manages to bring Guy’s memories flooding back as it’s later revealed that his code was altered to enable him to see past the parameters of his programming to prove that he could evolve. In other words, Guy was meant to be different from the rest of the NPCs.

Upon learning of how Blue Shirt Guy is still changing things up, Antwan eventually figures out what’s happening and sends in a different, more muscular version of Guy named Dude, a character that was slated to appear in the sequel to Free City, to take Guy out. The fight is kind of amusing and when Guy is able to bust out Captain America’s shield it’s worth it to see a cameo of Chris Evans as he reacts in shock to the sight. But overall, this movie is kind of confusing because it advocates for the better treatment of NPC’s, which isn’t total bunk since how a person reacts in an online game does matter at times given that those who want to play the game can also learn how to play with a certain level of respect for the programming. But apart from that, trying to advocate for an NPC can go too far very quickly since it’s essentially advocating for a fictional character that was thought up and brought to life by another human being.

It’s a tricky argument to get into really since respect and manners are important, but at the same time trying to argue for fictional beings is something that many people are willing to do without hesitation, while others see it as a bit silly. The movie was enjoyable and entertaining to be fair, and it does pack a good deal of emotion into the story, enough that one can actually feel for Guy and hope that he succeeds. But it’s not tough to imagine why some people might have left the theater with a confused look on their faces.