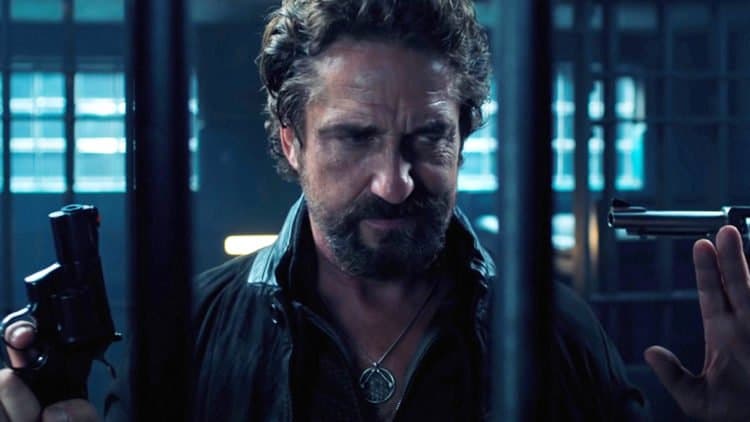 Sometimes it’s a matter of trying to figure out who can be trusted, when the truth is that no one can be trusted, apart from those that have already been taken out of the picture. This is the case with Copshop, a movie that’s interesting in that the catalyst for the story takes place before the movie even starts, and leaves everything open-ended once the credits start to roll. The story isn’t too complicated unless one fails to watch the whole thing from start to finish, since there are moments of exposition that really need to be experienced to comprehend the direction the story takes at one point. If one gets the basics they’ll understand the movie from a broader perspective, but if one is all about the details then they need to sit down and enjoy the movie from front to back as the saying goes. Thankfully there’s plenty of exposition to go around since between Frank Grillo and Gerard Butler there’s plenty of storytelling that goes into the narrative of the story that helps a person to understand why Teddy and Bob have such an issue with each other.

The story starts with Teddy as he’s on the run from Bob and the Las Vegas mob since he has incriminating information that could lead to the downfall of a few very powerful people, which is why he now has a price on his head. When Teddy does one of the few things that we ever see criminals do in the movies, which is to assault a cop to arrested, one might think it’s a smart move. But Bob isn’t any ordinary hitman since he knows how to hide in plain sight since he poses as a drunk and gets himself arrested after causing an intentional automobile accident. After placing an incendiary device outside the police station on his way in, which goes unnoticed by the cops, Bob is placed in the cell opposite Teddy, where he sobers up quickly, revealing it was an act all along.

Needless to say, most of the cops in this story are woefully inept at their job since it would appear that they don’t have enough to do and are therefore kind of bored, not to mention less than attentive. This is proven when another hitman, Arthur Lamb, enters the station and with the cover of delivering a bunch of balloons, goes on a shooting spree as he executes several officers before the lead character, Valerie Young, the same officer who Teddy struck to be incarcerated, locks herself behind a secure, bulletproof door that leads to the holding cells. Unfortunately for Valerie, one of her fellow officers is a corrupt cop that’s been smuggling drugs for the mob for a while, and he teams up with Lamb as they try to find a way into the cells. During this time, Bob not only beats the hell out of his genuinely drunken cellmate, but he trades barbs with Teddy as the two go back and forth in an effort to rattle each other. It’s safe to state that Bob isn’t easily rattled, but Teddy appears more than a little nervous while listening to Bob speak of the things he knows concerning Teddy’s family.

After being wounded in a gunfight with Lamb, Valerie, who was a victim of her own ricochet, has to decide who to believe between Bob and Teddy and ends up going with Teddy as she releases him so that he can find her a medical kit so that she can assess and treat her wound. At various points, this movie becomes the type of feature that many people might find a little frustrating, but in a good way, as they try to advise people on the screen since some of the more common-sense actions that are executed don’t appear to be in the best interest of any of the characters involved. This is especially true when Teddy shows his true colors and fails to return with a medical kit for Valerie but also shows his intention to light the police station on fire. Eventually, Valerie does get to her feet and frees Bob, but he’s shot by Teddy after he stabs Lamb.

The mayhem in this movie is great since it doesn’t have as much rhyme or reason as it needs to considering that it pushes forward on a premise that’s not quite as complete as it could be. It doesn’t matter really since the action and the dark humor that’s found in the story is great enough that one can enjoy the movie without really needing the added details once it’s all said and done. Plus, the fact that Bob is the most honorable of the crooks that are introduced, which isn’t saying much, is kind of nice since he shows that he’s the type of hitman that can walk away once the job is done without holding a grudge for being treated poorly. It kind of comes with the job after all.