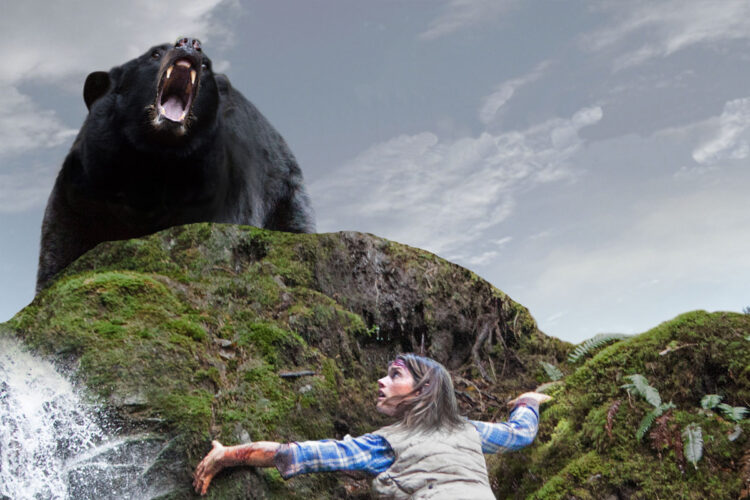 Horror movies set in the woods tend to have a lot of similar elements to them that become a little tiresome after a while, especially when it comes to a couple or a group that is being stalked by something, or someone. But Backcountry does keep things simple for the most part. Maybe they keep it a little TOO simple though since the idea of being chased through the woods by a bear is terrifying, but it’s fair to think that some people might have an issue with this movie simply because it doesn’t have the type of big-money horror effects that would otherwise turn the bear into a true movie monster. But there are a lot of those who would no doubt state that being confronted by a bear would be scary enough, especially when the prospect of being lost is already causing a person to stress out. When Alex and Jenn make their way into the woods, after already being given a warning about bears, they eventually find themselves in a situation that could have been prevented had good sense won out.

That’s kind of how it starts, isn’t it? A person makes a bad decision, that decision turns into another bad decision, and before one knows it, the initial problem has compounded and become something that can no longer be easily dealt with. Alex does have a plan and a reason for bringing Jenn to this particular stretch of woods since he spent a part of his youth coming up to the woods and having a good time. The only problem is that it would appear that it’s been a while since Alex was up in the woods, and his confidence in going off the trail will no doubt be depending heavily on his memory, which turns out to be faulty later on.

Initially, the couple does find a camping spot where they set up their tent and decide to spend the night. After cutting wood for their fire, Alex returns to find Jenn speaking to a stranger that wandered near their camp. Brad, a guide who shares his catch of fish with them, is as friendly as he can be, but no doubt senses that Alex is resentful about his presence. While he doesn’t start any trouble, Brad eventually leaves as Alex makes Jenn feel guilty for inviting Brad to stay for dinner. It’s very easy to see that Alex wanted this trip to be special, and anyone that intruded upon their time was going to be treated as an interloper. The funny thing about that is the fact that Jenn didn’t appear to be too intent on coming on the trip, and had to be talked into it to even get her on the trail. The entire time the couple is hiking it’s kind of obvious that she’s not having a good time, and that she would rather be anywhere else. Alex, on the other hand, is enthusiastic up until he manages to lose a toenail, though he pushes onward. Whether it’s the bloody sock that draws the bear or something else, the couple starts to notice the appearance of broken twigs and branches when they wake up.

One morning, the bear actually comes into contact with their tent, pressing its muzzle up against the front flap after walking around it. The many fears that people have about bear attacks are usually sound enough, but a bear attacking a human out of hunger is usually something that is easily debunked. In extreme cases, it’s very likely that this could happen. Should a bear’s primary food sources be depleted it could very easily happen that they might seek other food sources. But in this case, it was seen that the bear was simply a killer, which is a very rare occurrence as many wildlife experts would state. Still, that doesn’t eliminate the fear that would come from waking up to see a huge bear in one’s camp, especially if that bear was to see the human as well. Of course, the fact that Alex kept unzipping the tent to see if the bear had left wasn’t the best idea, especially since it alerted the bear to his presence. After that, it was kind of a foregone conclusion that the bear might come over, but the attack was something that many horror movies have done in the past.

From the moment that Jenn sees Alex chomped on and dragged out of the tent, it becomes a survival movie as she has to not only outrun and outmaneuver the bear, she has to find her way back to civilization. Tacking a broken leg onto that already difficult task, as well as the fact that the initial attack left her wounded, makes survival feel impossible. But by the end of the movie, she does manage to reach the canoe and even paddle her way back to the station. When all is said and done the feeling of realism in this movie wasn’t too bad, but otherwise, the same moronic elements that are recognizable in this movie are pretty standard.