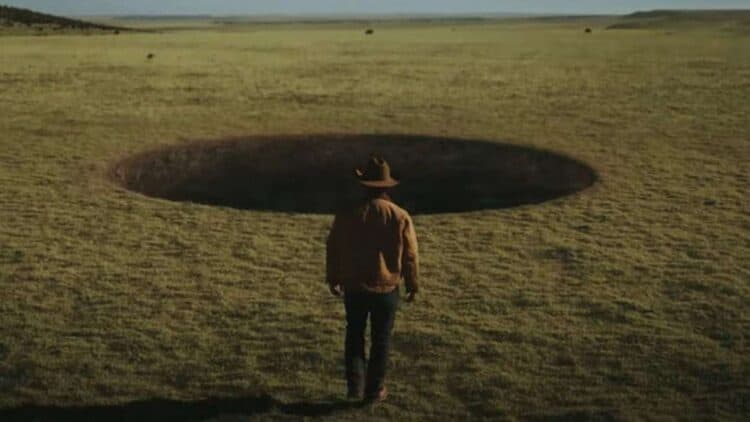 Mixing science fiction with other genres is kind of iffy sometimes, but there are those moments when it tends to work just fine since the actors selected for this show on Amazon Prime work perfectly and the story is interesting enough to keep people watching. It’s not perfect by any means since it’s a slow-burn type of show, but at the same time there’s enough there to keep folks wondering what’s going to happen next, and the way it starts makes a person wonder just how far Royal Abbott, played by Josh Brolin is bound to go to protect his land, his family, and their secrets. The hype given to this show is just barely deserved since there are a lot of questions that need answering almost right away when the show starts up since it would appear that Royal is attempting to get rid of a body by tossing it down a hole that appears to have no discernible bottom. Plus, the strange, shifting layer of material that dances incessantly across the top of the hole is mesmerizing in a way but also represents the danger of the unknown.

To start things out, Royal and his family, meaning his two sons, wife, and granddaughter, are already trying to cope with the disappearance of his son’s wife while trying to go about their daily business of running their ranch and trying to deal with the Tillerson’s, who have brought a land dispute against them for reasons unknown. It turns out that land rights and the property lines within this area are entirely screwed up, but since the Tillerson’s are rich and definitely carry great influence they’re bound to win the dispute without any question. It’s established that this would force the Abbotts to give up their western pasture, where it’s established that Royal found the strange hole that has inexplicably appeared on his land. The fact that the elder Tillerson wants it and is willing to take what he wants without compensation of any type is bad enough, but the fact that the elder of the family appears to know something is up making it even worse.

One reason that this show is fun to watch is that it does stay grounded from point A to point B in each episode. The idea of the giant hole, which reveals itself as an oddity that is more than what it appears to be, is one of the only truly far-out elements of the show thus far, though it is the catalyst for a couple of other moments that have come along, such as a mountaintop disappearing and a vision by Royal that feels almost prophetic. But apart from a few moments, the show does keep its boots on the ground as it goes on telling the story of the Royals and how they attempt to deal with the Tillerson’s and their desire for their land. Of course, things aren’t helped when the two sons visit the local bar one night and are confronted by one of the Tillerson sons, who finds himself on the wrong end of the two Abbott brothers and ends up mentioning the missing wife of one of them, which sends the brother into a rage.

Unfortunately, the brother ends up beating Tillerson to death and the two of them take the body back home to dispose of, though it leaves the two brothers of Tillerson feeling the need to find out what’s going on as they force their way onto the Abbott’s property to search for their brother. Royal, who is trying to protect his sons, takes the body to the hole on horseback and tosses it in. One would think that this would be the end of it, that the matter would be settled, but the realism continues as the Tillerson brothers continue to hound the Abbotts, along with the police, who don’t really want to be in the middle of things. But the reappearance of the dead Tillerson brother just beyond the Abbotts’ property definitely complicates things since it leaves them in a tough spot as to how to explain that the body came to be within sight of their land. Things only get more complicated as the story moves forward, since a young woman that starts camping on the Abbott’s land, with permission, is linked somehow to the strange disturbances.

In short, this show is worth watching if one enjoys a decent mystery that’s grounded in reality but offers up a mystery that’s hard to figure out. The pace of the show is interesting to be kind since it does move a bit slow at times, but things speed up when danger is imminent and the characters are set against each other. All in all, Outer Range is a fun show to watch when one needs something to pass the time, and if it gets better then it’s easy to say that it will be entirely worth it.