Home
Entertainment
Mountain Dew is Releasing Its Own Cookbook 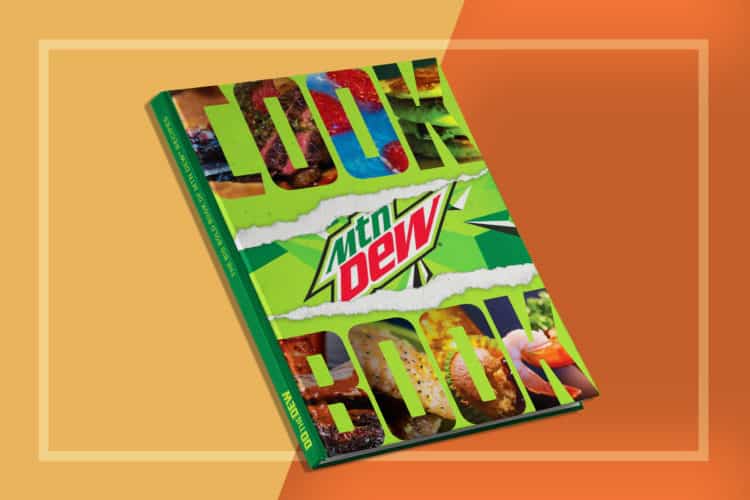 It’s not surprising that a cookbook will cost around $30, and it does feel as though people should be used to the fact that surprising things are coming along, which means they shouldn’t be surprised in the least bit to hear that Mt. Dew is getting a cookbook that’s a ‘love letter’ to the many fans that have enjoyed the drink for so long and have devoted their time and creativity towards creating dishes that feature the neon-green beverage as part of the ingredients in some well-defined way. If you’re already cringing then don’t feel too bad since those that aren’t into the Dew are feeling the same way, but it’s still intriguing to think of what could happen if certain dishes were made using this green beverage. If a person can get past the taste and the way it looks then they should be able to stand pretty much any recipe since there are those in which the taste won’t be as noticeable, nor will the color, but there are others that might be kind of hard for some folks to stomach simply because, well, there’s a lot of sugar in Mt. Dew and it is bound to affect the taste of the dish. But hey, different people enjoy different foods, so it’s all well and good, and this could be an interesting gift for those that are trying their hand at cooking and are into the kind of innovative if somewhat confusing techniques that might come from this book.

Mt. Dew is something that a person really needs to have a taste for since it’s one of the most sugary drinks out there, and while it is topped in this category by other sodas, Surge being one of the absolute worst in terms of sugar content, it’s still something that one might use sparingly as an ingredient since otherwise, it could overpower pretty much anything that it’s paired with. But as anyone should be able to admit, sugar is a very powerful and very addictive substance since the more one eats, the more one wants. Some people don’t fall under this trap since their body either doesn’t process sugar as well or they simply don’t like the feeling it gives them, but others can consume sugar by the pound and not feel any ill effects, until later perhaps. The sugar buzz that one gets off of large quantities of sugar is well-documented, as is the crash that comes after. It’s easy to think though that cooking down the drink and using it for flavor or simply using it as an ingredient that can give a little more body to a dish would be the goal that some of the recipes in this book might be after. Some might actually use it for color while others would attempt to make it the highlight of the dish. However, it’s being used it’s easy to see that some people would cringe and others would be ready to eat.

One of the positives about this cookbook is that it has incorporated recipes that were created by fans of Mt. Dew, which means that it’s not a book that was created by an entirely elite number of chefs that are seeking to get their names out there. Some of them might be, but it does sound as though those that contributed are wanting to share their culinary experiments with the world and might not really care if they’re going to be made famous or not for what they’ve done. There are some recipes in the book that would likely be refused by those that don’t want to think about eating something that’s been turned a hue of green that could glow in the dark, but those that are adventurous enough and don’t mind what their food looks like would probably dig in just to see how the dish would taste in order to determine if it’s something they like or something that will turn their stomach. Sometimes being adventurous with food is the best way to experience things that you might not have given much thought to in the past, and this cookbook is one way to do that since it’s bound to be at least a little interesting even if there are recipes that don’t appear to be all that great depending on one’s sense of taste. Mt. Dew with eggs just doesn’t sound that great, but there’s bound to be a few people that would at least try it.

Food can be adventurous, there’s no doubt about it, and chefs of all caliber are those that are constantly trying to come up with new and innovative ways to present one dish or another in a way that people might not have seen before. Mt. Dew is definitely an unconventional ingredient, but it’s still worth considering.