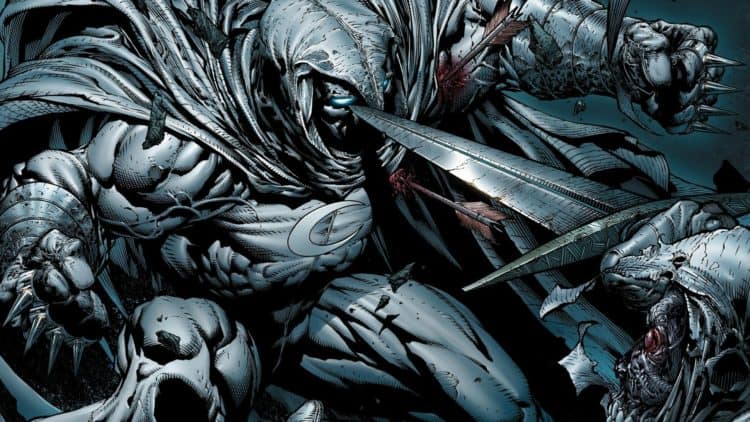 There’s been plenty of hype given to Moon Knight leading up to his Disney+ series, but there’s been plenty of speculation concerning his efficiency as a vigilante in the Marvel universe over the years. Marc Spector has been a known character for decades now, and while his popularity has come and gone, his emergence into the MCU is, as of now, something that’s been highly anticipated. And yet, how tough he really is remains kind of a question since at the street level he’s without a doubt one of the toughest individuals in the Marvel universe. But despite being able to punch above his weight class, Moon Knight does have limits and weaknesses that others can exploit. Plus, while he is a trained mercenary and vigilante, he is still human, and even if he’s able to push himself harder and longer than many others, he is still vulnerable if one knows how to attack him. This is where the Punisher comes in. The two have encountered each other over the years and it’s been seen that they’re not exactly friends but they’re not always enemies. Pitting them against one another in a deathmatch would be interesting since both men are driven in their pursuit of justice, they’re heavily armed, and their ability to engage in single-minded quests that see them laying waste to criminals is well-documented.

Some people believe that Moon Knight would wipe the floor with the Punisher, as his strength levels and durability might be a little greater. But the two men are more equally matched than many might want to admit. While Frank Castle doesn’t have the same type of moon-inspired weaponry that Moon Knight has, the depth of his arsenal is often more than a little impressive, and his ability to work the battlefield of his choosing is amazing as well. Both men are tacticians, both are insanely brutal, and both can go longer and harder than the average man.

Moon Knight does have a slight advantage since he does use body armor, and he’s good from a distance as well as up close. Frank Castle’s hand to hand skills aren’t bad since he is a trained soldier and has only become more dangerous as a vigilante, but at the same time, MK might take a decent percentage of the up-close encounters since he’s known to be a bit psychotic and prone to doing whatever it takes to win a fight. The Punisher isn’t any less willing to engage in brutality, but it’s fair to say that MK would be the first to let his morality abandon him. From a distance, it does feel that the Punisher might have a slightly greater advantage, especially since with his tactical knowledge, Castle might be able to anticipate Moon Knight. But it would be remiss of me to state that MK couldn’t do the same thing since both men are, as mentioned, highly skilled and capable of taking down enemies that are far more powerful than they are through sheer will and the ability to outthink their opponents. This would be a tougher fight to call than many want to admit, but whether it’s because Moon Knight’s actions have been more gruesome than the Punisher’s is hard to tell.

The point is that both fighters would bring their best to this match, and it would be a seriously tough fight to call down the line since trying to state who would anticipate who the best and who would strike the most telling blow. In hand-to-hand combat, this would be edged out by Moon Knight, but not easily, while the distance game would belong to the Punisher. When it comes to overall weaponry and tactics, that’s even harder to call since both men are quite good at what they do. But as far as mental stability goes, it does feel as though Frank does have a bit of an edge since his focus is more absolute than MK’s, who tends to cycle through his different personalities at times and, sadly, can get a bit confused. If Frank found it possible to press this advantage he might find it a little easier to discombobulate MK just long enough to gain a real edge.

One certainty is that this fight would be undeniably brutal and that it would test the mettle of both fighters since neither would go down quietly. Thinking that either of them could stomp each other is entirely possible, but only if they catch each other slipping. With that being said, this would be the kind of fight that would go down to the wire and be one of the toughest to award to either fighter. But many fans would take sides immediately without hesitation, no matter if they were fans of both characters. Both are tough, but there are minor faults that they could capitalize on.