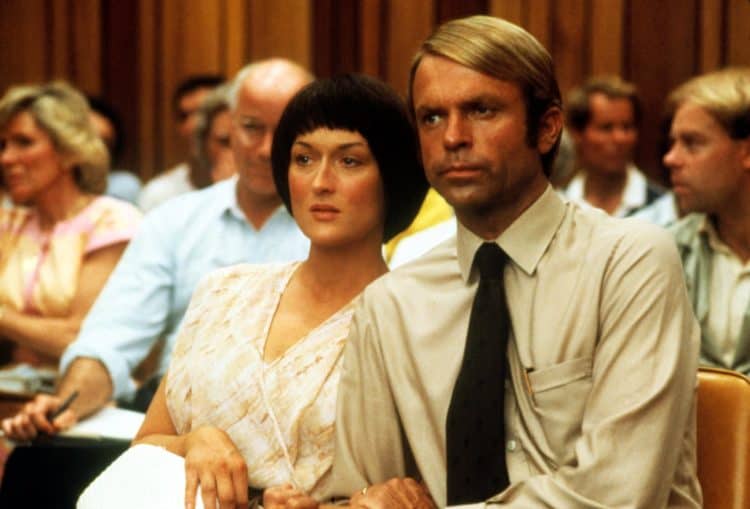 Perfecting a regional accent and dialect is one of the hardest technical details actors face, but for a screen icon like Meryl Streep, it almost seems easy because her mastery of accents is so believable. Emulating the dialect of a region not your own is all about listening closely and practicing endlessly with authentic primary sources of the accent being spoken. But the reality is that some actors are specially-gifted in how they can pull this off, and most who attempt it usually fall flat (Dick Van Dyke in Mary Poppins, Keanu Reeves in Bram Stoker’s Dracula). And then, there is Meryl Streep; her dialect mastery is quite possibly the best in the history of screen acting. Even in films where she plays characters from her home country of America, she uses various, subtle, American dialects–upscale West coast in Postcards From the Edge (1990) and Death Becomes Her (1992), and perfect Oklahoman in Silkwood (1983)–to say nothing of her wide range of foreign accents. But for all her dialect triumphs, there are bound to be a few misfires as well. Here are the best and worst character accents from Meryl Streep.

Meryl Streep’s iconic performance as Sophie Zawistowska in Sophie’s Choice is one of the most memorable female performances in film history, and Streep’s technical prowess in the film is certainly one of the sticking points that backs up this consensus. Her character is from Poland, which sees the actress speak in a flawless Polish accent throughout the film. Additionally, she also speaks Polish in the film as well as Polish-accented German. Not once can you find hints of Streep’s regular voice. You sometimes forget about her technique because her performance is also extraordinary.

Streep’s most recent Oscar win was for her stunning portrayal of 1980s UK Prime Minister Margaret Thatcher in The Iron Lady. It would be incorrect to say that Meryl is simply speaking with a very refined and heightened English accent, but rather that she is completely emulating Thatcher’s voice with incredible accuracy. Like Sophie’s Choice, it is very hard to find a single slip-up where the tone of Meryl’s real voice comes out in the performance.

In 1988’s A Cry in the Dark, Meryl plays Lindy Chamberlain, a woman falsely accused of murdering her infant daughter in the summer of 1980 in the Australian outback. Instead of grabbing an Australian accent and running with it, Meryl actually researched the New Zealand born and raised Lindy to begin emulating her voice based on Australian newsreels. Her accent is perfect, and those who frequently bash it fail to realize that she is speaking as a native New Zealander with only slight touches of Australian to reflect Lindy’s decade plus of living in Australia at the time of the incident.

An often-overlooked Streep performance is her portrayal of the doomed Helen Archer in Ironweed with Jack Nicholson. The movie is set during Depression-era Albany, NY, and both Streep and Nicholson play once great but now down-on-their-luck, homeless alcoholics. Streep’s accent at first sounds strange, but you begin to compare it to the thick, upper Atlantic drawls that defined the early parts of 20th-century America–a bit like Katharine Hepburn and James Cagney. This accent mastery demonstrated that Streep was committed to changing her voice to match her character’s region and history was assured–even in homegrown, American performances. What is even more impressive is how she keeps the accent intact during an entire scene where she sings a song.

Streep has not always excelled at each accent she attempted, and perhaps the Danish accent she applied to her character in Out of Africa was reaching a bit too far in the believability factor. She was playing a colonial-era, upper-class writer from Denmark who moves to Africa during the Age of Empire in the early 20-th century, but the dialect is all over the place. There are times in the film when she sounds a bit Victorian English, and the Danish inflections are more suitable to a German accent if anything. But her attempt is admirable, especially considering she is from New Jersey and was attempting a European accent that is rarely heard outside of Denmark. But she perhaps should have followed her co-star, Robert Redford, who didn’t even attempt a British accent for his character for fear of messing it up.

Streep’s first lead performance came in 1981’s The French Lieutenant’s Woman; a leisurely-paced and beautifully-shot film within a film, but what truly amounts to a pretentious bore. She plays the role flawlessly, but her attempt at a Victorian-era English accent is flimsy and light, with far too many moments of her own tone and inflection coming through during her speaking. It is far from the worst attempts of an American actor attempting a British dialect, but the accent sounds far too affected and forgettable. Perhaps this could be from the plot of the film, which has her playing an American actress (in the film) who is playing a British woman from the late-19th century as part of the film’s framing device plot. But regardless, this is one of her lesser dialect masteries.

But Streep’s dim English accent in The French Lieutenant’s Woman was not to last for long as she again played an English lady in 1985’s Plenty, and absolutely nailed the dialect. Her character has several very long monologs, many of which have the camera focusing on Streep for the better part of 5-10 minutes, and never once does she break the English tone and inflection in her speaking voice, even if the film itself is a bit of chore to watch.