Home
Television
Meet The Cast of B Positive Season 2 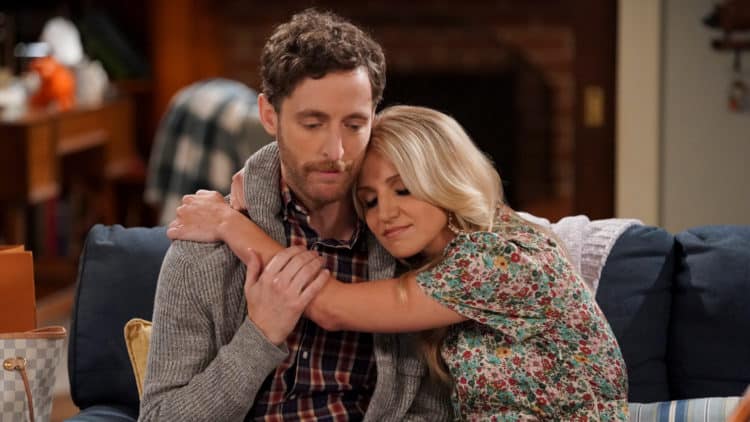 The entertainment industry is known for recycling plots and storylines over and over again. However, when the series B Positive premiered in the fall of 2020, it brought something fresh to the TV world. Centered around Drew (Thomas Middleditch), a divorced father in need of a kidney transplant, he has a difficult time finding a donor due to his B positive blood type. Luckily, Gina (Annaleigh Ashford), an old high school friend, ends up being a match and offers to donate one of her kidneys. The series is heartwarming and funny and fans were excited to see it come back for a second season. However, viewers may have noticed that this season’s cast looks a little different from the first. Keep reading to meet the cast for the second season of B Positive.

Thomas Middleditch’s acting resume is a lot more impressive than many people realize, and that’s because his face isn’t attached to many of his roles. He has spent a good portion of his career doing voice roles. Some of his voice acting credits include Beavis and Butt-Head and Solar Opposites. He has also been in some video games. He also has experience on the other side of the camera as a writer and producer. Thomas’ career isn’t the only area of his life where he’s had lots of excitement. He was married from 2015 to 2021 and during that time he and his wife had an open relationship.

Since making her on-screen debut in 2007, Annaleigh Ashford has been working her way up in the entertainment industry. Her first major role came in 2013 when she earned a part in Masters of Sex. In 2018, she was cast in the anthology series American Crime Story and that gave her the opportunity to share her skills with an even bigger audience. Analeigh has also had a successful theater career that includes being part of Broadway productions. In addition to acting, Annaleigh is a talented singer.

Kether Donohue has been in the entertainment industry for more than 20 years. During that time she has built up a resume that includes nearly 70 credits and the list continues to grow a little every year. Many of her best-known roles include voice roles in shows like Pokemon, Elena of Avalor, and Kappa Mikey. Overall, Kether is pretty private when it comes to her personal life. However, she is pretty active on Instagram where she posts a variety of content.

Sara Rue is the kind of actress who has spent her career showing the world how versatile she is. From comedy to drama, she always knows how to put on a great performance and she never seems afraid to step out of her comfort zone and try new things. As a result, she’s had a very successful career that includes roles in some very popular shows such as Less Than Perfect and Bones. Sara is also a writer and producer who has worked on a handful of projects.

Izzy G might be just 13 years old, but she certainly isn’t your average teenager. She already has nearly 10 acting credits and there’s no doubt that she’s going to have even more in the years to come. Her first major role was in the TV series AJ and the Queen and it proved to be the perfect opportunity to showcase her talents in front of a large audience. If she continues down the path she’s on, there’s no doubt that Izzy’s career is really going to blossom.

David Anthony Higgins is the kind of actor you may not know by name, but there’s a chance you’ve seen his face in a few things over the years. He started his career in the late 1980s and he has worked consistently ever since. He has also gotten the opportunity to tell stories from the other side of the camera as a writer and producer. Even though David spends a lot of time acting, he loves being around his family when he isn’t busy with work. He has been married since 2000 and he and his wife have two children together.

Anna Maria Horsford is a legend in the entertainment industry and her resume certainly speaks for itself. She currently has well over 100 acting credits and she’s nowhere near finished yet. Over the course of her career, she has gotten to work with some of the biggest names in the business and her hard work and dedication certainly haven’t gone unnoticed. She has earned three Daytime Emmy Award nominations and hopefully, there will be a win in her future.

Hector Elizondo is new to the B Positive cast as of season two, but he’s already proving to be a very welcome addition. After spending nearly 60 years in the entertainment industry, Hector is a well-respected veteran who brings something special to every project he’s a part of. At this point in his career, you’ve probably seen him on your screen countless times. As he approaches his mid-80s, Hector continues to leave viewers in awe of his immense talent.

Although Darryl Stephens was part of the cast during season one, he’s playing a more prominent role for season 2. This opportunity has given him the chance to put his talent at the forefront and he has a way of commanding attention every time he steps in front of the camera. Prior to this series, Darryl was best known for his role as the title character in the TV series Noah’s Arc. Although Noah’s Arc was relatively short-lived, it remains one of the most iconic LGBTQ+ tv series in recent history.

Linda Lavin is another cast member whose role has been upgraded for season two and it’s nice to see the legendary actress getting more screen time. Like Hector Elizondo, Linda is also approaching her mid 80s, but she hasn’t missed a beat. On top of B Positive, Linda also has a film in the works called Being the Ricardos which is set to be released in 2021. Outside of acting, Linda has been married three times. However, she does not have any biological children.

Most of Priscilla Lopez’s work has been in feature films and TV movies, but her natural comedic timing makes her the perfect fit for sitcoms. Not only has Priscilla made a name for herself on the screen, but she’s also had a successful theater career both on and off-Broadway. One of her most notable Broadway appearances was a production of Lin Manuel’s In the Heights. Even though she’s a new cast member on B Positive for season two, she fits in perfectly with the rest of the cast. In addition to the show, she is also working on a movie called Christmas Again which will likely be released sometime around the holiday season.

Jane Seymour got her start in the United Kingdom, but she has since become well known all over the world. Most people will know her best for her role as the title character in the TV series Dr. Quinn, Medicine Woman. However, she has done many more things than that. Since starting her career in the late 1960s, she has been working nonstop between TV shows and movies. Not only did she just join the cast of B Positive, but she also has a lot of other things going on. She has two TV shows and two movies in the works, but it’s unclear when any of them will be released.

As an actor, singer, and dancer Ben Vereen is the true definition of a triple threat. His career has spanned the course of 7 decades and he has earned lots of respect and admiration during that time. On top of having more than 80 on-screen credits, Ben has also had a successful theater career. One of his most notable stage credits was the Broadway production of Jesus Christ Superstar. In addition to winning a Tony Award, he has been nominated for two Golden Globes and two Primetime Emmy Awards. As he approaches his 80s, Ben is still working hard and it doesn’t look like he plans to slow down any time soon. On a personal note, Ben is the proud father of five children. Sadly, however, one of his children passed away in 2020.

With the amount of experience Jim Beaver has, he’s shown the world time and time again that there isn’t any role or genre that he can’t master. Since starting his career in the late 1970s, Jim has worked his way through the industry and he has built a very impressive resume. He has more than 150 on-screen credits with the majority of his career being focused on TV opportunities. At this point, it’s very likely that you’ve seen his face in at least a few things over the years. Jim has also written and produced several projects over the years and he’s even done some stunts.