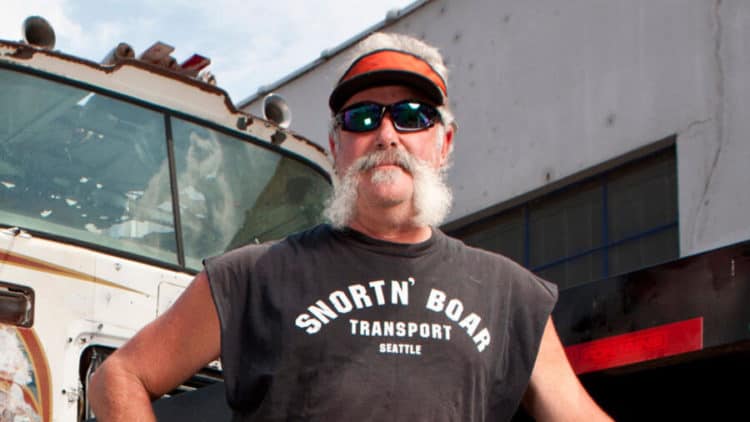 Do you recognize the name Marc Springer? He is the man who stars on your television on the show “Shipping Wars,” alongside a successful cast of people. He’s part of the shipping industry and the A&E reality television lineup that graces our televisions. He is a man who doesn’t take anything from anyone unless he wants it, and he’s a man who has made bold choices in his life. Not every choice he’s made has been one he wanted to make or chose to make, but he’s made some bold choices whether they are by necessity or chance. He’s also someone who leads a fascinating life, and we want to know more about the reality star.

1. He is a Former Salesman

There was a time in his life when he was in another line of work. He did not always work in the shipping industry. In fact, there was a time this man was in sales. Sure, it might seem like the last job he might be in, but he was in the salesforce working with Harley-Davidson as a motorcycle salesman. Does that make more sense?

He’s a bike lover. He loves motorcycles. Looking at them, selling them, riding them – you name it, and he’s happy to be around a bike. In fact, it was his love of bikes that was his entrance into this game after he realized that he was not making any money as a bike salesman in a bad economy.

Not only is he a father, but he’s also a father of four. He and his wife have four kids of their own, and they are the primary reason why he does what he does. He was having a difficult time making ends meet as a motorcycle salesman in a poor economy, and he had to do something else. His kids needed him to provide for them, and that is what he did.

4. He Stumbled Into Shipping

It was accidental from the start. No one was buying bikes in the previous economy – the one that seems to be making a big return following the secondary entrance into the White House by the same man who was new to the house when the economy crashed the first time – and he got out while he could. While looking for work that would allow him to make ends meet, he found an ad online. Someone needed two motorcycles shipped across the country, and the job paid a few grand. He took the job, had an epiphany, and now he’s the proud owner of a big rig.

5. He’s Into the Biggest and the Baddest

There is not a thing in the world he will not ship, but he does prefer to make sure what he is shipping is the biggest, the baddest, and the most exciting. He bought himself a big rig within two years of being in this business, and he’s into shipping the coolest things possible across the country.

When he is not driving, he is…driving. He’s a racer with a team of his own. He has a team called the Snortn Boar Racing team, and he works hard to make sure they can make it big. His team is named after his own business, and that’s a big deal to him.

7. He is Into Business

This is a man who went from selling things that were made by other people to doing his own thing. He started a shipping company, he started a racing team, and now he is starting his own leather-making company. It’ll be called Snortn Boar Leatherworks, and he advertised that it’s coming soon on his IG page.

He’s a man who loves to hunt, and he makes that very apparent online. He has an RV he uses to stay in when he’s hunting, and he shows off his kills when he has one. He loves to be outdoors, and that just seems to be his deal.

He might seem like the kind of man who doesn’t enjoy cooking because he simply does not have the time, but he cooks. From the looks of it, too, he cooks quite well. He has a lot of photos of his kitchen work on his ‘gram page, and he appears to have some great taste.

If you’re looking for Marc Springer, just check outside. He’s not going to be found indoors unless he has no other choice. He comes across as a man who wants to spend his time outside focusing on the things that are good for his own mental health.