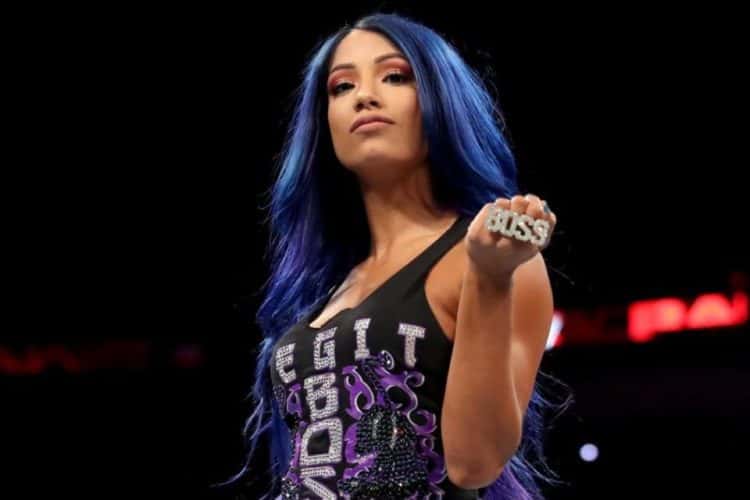 There have been some big names on the hit Disney+ show The Mandalorian in just one season, including Nick Nolte, Bill Burr, Carl Weathers, Gina Carano, and several others. But it would appear that another big name is about to be added with the WWE’s Sasha Banks. According to Kevin Burwick of TVWeb Sasha was seen with the stuntman that’s in charge of taking the heavy hits for the regular actor, which is enough to get the rumor mill going of course. What part she’ll be playing is uncertain at this time and it should hopefully remain that way, but we know it won’t, up until season 2 is ready to be unveiled. Many sites have already spoken up about what happened during the finale of the last season and what we’re hoping to see, but at this point it’s worth it to mention all the loose ends that the Mando is leaving behind and the loose ends that might still be creeping up in front of him. Being a bounty hunter isn’t the most stable life and it’s definitely not the type where you can trust your friends at all times since this has been proven more than once in the course of the first season.

It’s a big hope of course that Sasha isn’t some innocuous character that will show up on screen but not be recognized. Even Ming-Na Wen managed to get a decent role as a combatant before she was taken out, and it’s worth mentioning that there are three prisoners that the Mando left behind who’d like to have a word with him no doubt. A few of the characters that were taken out during the course of the show are going to be missed no doubt, even the more villainous ones that were still kind of interesting. But moving forward it’s always a wonder as to what Jon Favreau is going to come up with and if we’ll see more if Carl Weathers and Gina Carano since both of them are too great to have a single season before checking out. In a sense though it all comes down to what each of them are doing at the moment and whether or not they could even meet the schedule of the show. Bringing in Sasha Banks almost indicates that the second season will have someone just as daunting as Cara Dune but perhaps not quite as noble in their own way. If anyone’s keeping track ‘The Boss’ from WWE hasn’t exactly been the face all that often and has been more of a heel character than anything, which is where she tends to gain the most attention from the fans since this is how she came onto the main roster and this is how the people have come to know her.

It’s almost a guarantee that we won’t see her as a stormtrooper as Kevin Burwick kids around with, as unlike many of the extras that have been used for the first season she’s a higher caliber of actor, given that she’s been in the WWE for a while, and will likely be given something a little more befitting of her status. It might be that she’ll be another individual that we’ll see in one or two episodes as the manner in which The Mandalorian has been shown it’s definitely more akin to a video game in which random quests come along and end up giving the main character a challenge even while leaving him stronger at the end in some way. Each new trial that’s come along has been harder or trickier in some way, and the Mando has had plenty of help as well, from Baby Yoda to Kuiil to Cara Dune, Greef Carga, and even IG-11.

He’s had plenty of detractors as well since during one episode he was sent with a group to free a single prisoner and ended up having to fight the entire group and discover a way to escape in the process. In other words, in the same fashion as a video game he’s been handed a rough life and been made to persevere throughout every challenge that’s come his way, gaining new armor, a new experience, and an even more interesting story along the way. Whether Sasha’s character will be an enemy or an ally is hard to say since it all depends on who she’s going to be and where her allegiances lay. If she’s a former Imperial then it might be that she’ll be helping Moff Gideon in his quest to find the Mando and Baby Yoda. If she’s a Republic soldier or someone that’s not affiliated with either faction however it could be even more interesting. Even better, in my opinion, would be if she came in as a version of Mara Jade, the former Emperor’s Hand, but that sounds like extremely wishful thinking, not to mention a disastrous meeting since Mara is a Force-user and Mandalorian’s don’t tend to trust anyone that can use the Force. A guy can dream though.