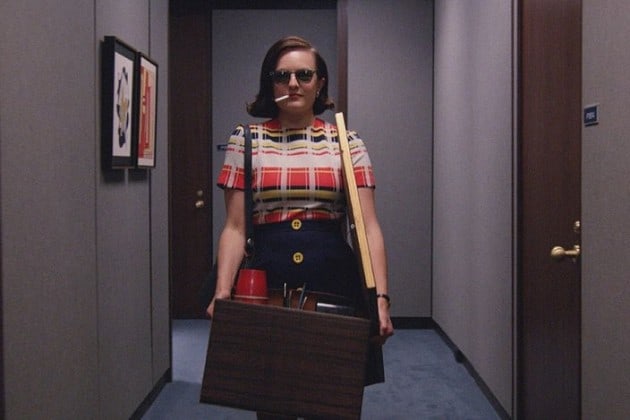 Don Draper has a thing for windows. To him, they represent greener pastures, the better life he has been trying to dig out of everyone else since he was a child. Don’s epiphany in tonight’s episode of Mad Men comes from that world beyond the windows. He sees a plane fly by the Empire State Building, and he just picks up and leaves.

What’s so important about that scene, though, is that nobody even noticed. Except for Ted. Ted Chaogh, long-time Draper nemesis and mirror image, sees Don leave, and he lets out a quick grin and a quiet laugh. Ted knows what Don saw out of that window; he knows what Don is running from. But Ted has already given into the inevitable truth that Don has always been running from.

Windows are not portals; they lead nowhere except to what you can see. They function as barriers from that world, sheltering us from uncomfortable things while also making sure that we remember that things exist outside of sheetrock walls and oak desks. Don is obsessed with windows because they give him exactly what he wants: a vision that can never be fulfilled. Don doesn’t want the happily-ever-after; he wants to chase it in a Cadillac. As always, Don Draper is chasing his brown-haired girl, looking for substance in the creases of worn bedsheets. As always, he steps on other people to get there. And, as always, he ends up with someone telling him to go away.

Roger and Peggy haven’t interacted much over the seven seasons Mad Men has been on the air. Come to think of it, I can’t remember a time when they ever did. But it doesn’t surprise me one bit that they find common ground in the Sterling Cooper and Partner office. They owe everything to that place, as unfortunate as they may be.

Peggy didn’t want to share a drink with Roger; she wanted out of that place, and into her new office. There wasn’t anything left as SC&P, no electricity, or furniture, or booze. She spilled coffee on the ground and left it there, because it wasn’t her mess to clean up anymore. The office itself was empty and sad, and she was being forced to relive it over and over again.

But it wasn’t, and never was, about the office. The office is just a bunch of walls where things happen; in three weeks, some stupid start-up firm will stroll into the freshly cleaned and newly vacated offices and plop down a deposit. It has always been about the people that inhabited it.

That’s why Roger and Peggy stuck around for so long; flimsy ghosts of lives gone past, like Burt Cooper in the passenger seat, still lingered. They were searching for something more. They got drunk and played the piano and Peggy skated around the office over and over again, because that’s what you’re supposed to do when your life changes. Your boat gets rocked and you shift from side to side until you find your equilibrium again. It only takes a little push, as Roger would say.

The lesson here, of course, is to drink the vermouth. Remember that it’s about the people, and not the place, or the things. Don’t allow yourself to regret the moments you did not live, because when you’re old and gray like Roger, you’ll wish you were young like Peggy. Drink the vermouth, even if you hate it. Take the octopus erotica; it’ll be a great story. Peggy and Roger will never forget those moments together, and they didn’t have to step on each other to do it.

An age-old debate: stick to your principles, or take what you can while you can?

It’s not a question to be answered, of course, because neither is a good rule of thumb. Joan wants to burn McCann to the ground, and she should; the disrespect she has endured simply for existing is cause for homicide, especially of those with cheap haircuts and expensive suits. It was not a throwaway detail that Joan got only half of her money; she is forced to settle of half of what she truly deserves, and yet.

Joan with 250,000 dollars is a Joan that will never have to worry about anything ever again. She has a rich boyfriend who supports her, a son whom she loves, and more money that she could ever have imagined. But she earned a half of a million dollars. Why should she have to take less?

There’s a thing that guilt-ridden people do. They are often white, male, and properly educated, and it goes a little something like this: “Well, that’s progress.” But it isn’t. Joan is rich but she deserved more. She has a lot but has earned more. She deserves better than a rapist ex-husband and a fatherless child. She deserves better than Dennis the junior account exec stepping on her toes, and she damn sure deserves better than Ferg Donley putting his hands on hers. Sure, Joan has everything anyone could ever want, but she could’ve had much more if it wasn’t withheld from here, and that’s the point.

Maybe the most important thing to realize about the story told in this week’s Mad Men is how far away everyone is from each other. They have different floors they work on now; Stan is on fourteen, and Don is on nineteen, and Roger is somewhere above that. They run into one another in the elevator and smile; absence makes the heart grow fonder, and that was never more apparent than the real warmth between Don and Joan. But that’s it; that’s all they get.

The offices as Sterling Cooper & Partners were small, and, oftentimes, suffocating; it felt like everyone was always bumping and whirring into one another as they worked. Half of Don’s office at McCann is still bigger than the one he had at SC&P. But the thing about that much space is that it needs to be filled. Don Draper likes looking out of his window and imagining all the things he could do with that much room to breathe. But the thing that you find out when you get the corner office with the great view and the deepest volume is that all the things that were supposed to fill it are gone. All of the people you sweated with at 3 a.m. trying to come up with an ad pitch have their own offices, or are your subordinates now. All of that laughter and fear and alcohol is gone. You cried in that old space, and it filled the room.

– I will never get over that image of Peggy skating.

– If the road feels traveled, and the obstacles easy to traverse, probably don’t take it, Don.

– Meredith is the best secretary, and I don’t think that Don was happy when they called her a moron.