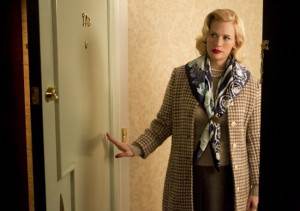 While the title of this episode of Mad Men could be perfect timing for the new Johnny Depp movie that was released this weekend (and is based on a TV show that debuted in 1966) it has much less to do with pop culture and more to do with what threats are lurking. This darkness is real and imaginary as light or the absence of it is used to highlight insecurities and challenges.

The episode opens with Betty (January Jones) making a snack in the dark; is this a snack because she didn’t eat much for her real dinner? This is only the second time that Betty has appeared this season and she is slightly slimmer than when we last saw her, but there is still a major issue with food and control. Betty has always had food problems; when she was with Don she barely ate and since Don has remarried she has lost this element of control. The Weight Watchers group that Betty is attending is almost like therapy as they are encouraged to discuss whether they have had a good or a bad week in regards to the food they have eaten and the emotions that they are feeling. Betty has a very strong emotional reaction to seeing Don (Jon Hamm) and Megan’s (Jessica ParÃ©) apartment and seeing the new Mrs Draper changing clothes. Megan is not only younger, but she has an amazing figure too and this would make any ex feel bad. This leads to Betty eating whipped cream straight from the can and then spitting it out; once again in the dark of her kitchen.

The moment that really sucker punches Betty comes courtesy of a note from Don to Megan that Betty sees on the back of one of Bobby’s (Mason Vale Cotton) drawings and reads “Lovely Megan, I went to buy a light bulb. When I get back I’ll see you better.” Betty knows that Don is good with words but this glimpse into their life, coupled with the encounter with Megan at the apartment has Betty trying to regain control by being spiteful and using her daughter in the process. Sally (Kiernan Shipka) is doing a family tree for school and what better way to try and ruin things for Don and Megan but to mention the original Mrs Draper. Considering Don never freely shared the information about Anna until Betty opened his drawer of secrets it was clear that Betty did not expect Megan to be aware of Anna or even Dick. 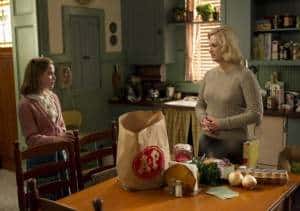 Betty is lashing out at Don’s new ‘perfect’ life in the only way she knows how and it is a rather childish attempt to poison them. Sally plays her part perfectly and is becoming quite the sassy little brat; the teen with an attitude problem is not a new concept and can be off putting but in this case it works perfectly and Shipka once again shows what a talent she is.

Megan is attempting the friendly step-parent role which can be a challenge but she manages Sally’s questions about Anna rather well, even if Don explodes at the fact that Megan answered them. Don’s instant reaction is to ring Betty to yell at her but Megan has the sense to read the situation for what it is and stop him from doing so. Sally is listening intently in the dark and while she might not fully understand how her mother has manipulated her she doesn’t deliver the news that Betty was hoping for and manipulates Betty in return by telling her how fondly Don and Megan spoke of Anna. Sally doesn’t want to be treated like a child and it appears that she is quickly learning how adults play these kinds of situations.

Betty isn’t the only one lurking in the dark when she can’t control her urges as Roger (John Slattery) and Jane (Peyton List) have a brief reunion after a work related dinner in her new apartment. Roger is going to run out of money soon if he doesn’t watch out as he buys Jane a new apartment, as the old one is sullied with memories of them and he then does the same in her new one. Jane isn’t the only one who takes some of Roger’s seemingly endless supply of cash as he has to dig deep once again in his quest to keep up with Pete (Vincent Kartheiser). This time he goes to Ginsberg (Ben Feldman), something that bothers Peggy (Elisabeth Moss) when she finds out; she doesn’t reveal this annoyance to Ginsberg, which is for Roger only. 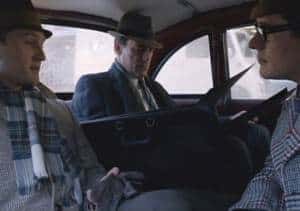 Peggy feels threatened by Ginsberg’s natural talent, but as Don is on the rusty side he too has inadequate feelings next to Ginsberg. Don looks through Ginsberg’s work after he goes to turn off Ginsberg’s lamp and he is impressed and amused by what he sees. What starts as amusement and admiration soon turns sour as he realizes that his own idea is not as good. Don is the boss though and so he gets to go with whatever idea he wants to, even if Don’s is not the best of the suggestions. Leaving Ginsberg’s work in the cab is a rather petty act though. Is this just the start of a creative rivalry between the old and new? Whatever it is Peggy is happy to see Ginsberg have a moment of failure like this.

-Megan teaches Sally how to cry on cue; a new skill I thought we might get to see used by Sally in this episode. Instead Sally used it as a barb against Megan when Sally has her particularly cruel moment. It could come in useful for Sally later in the season. Sally definitely possesses the cruel streak that her mother has and uses it against both Megan and Betty.

-Betty’s portion size for her Thanksgiving dinner was particularly depressing; a turning point for Betty and her control with food or will we see her sneaking to the kitchen for some late night cheese?

-Don deals a low blow with the ‘fat nose’ jab about Betty.

-Henry (Christopher Stanley) is much more likeable when he isn’t trying to compete with Don.

-Pete didn’t get to hook up with Beth (Alexis Bledel) in real life but he did have a rather saucy fantasy about her at work. He added in the SCDP appearance in The New York Times magazine that sadly never came to pass so it was double the fantasy moment. Is this the nearest to completely topless that the show has done so far?

-Bobby Draper got some lines! And he is thankful for two houses and his sled. Plus he likes to draw whales that smile when they are being harpooned.

-Megan’s friend is auditioning for the TV series Dark Shadows and Megan isn’t so kind about the material.

-Smog in New York in 1966 wouldn’t just ruin Thanksgiving dinner and it did have the power to kill, so Megan wasn’t being completely crazy when she told Don not to open the doors. Yes this is clearly a metaphor for Betty in a huge anvil shape but at least this symbolism is rooted in fact.

Light bulbs are important in this episode not only do they illuminate the kind of work Ginsberg has been doing while Don has been on “love leave,” they are also part of the catalyst for Betty’s actions thanks to the note that Don left for Megan. These characters do things in the dark that they then regret in the daylight, but they still do these things anyway and could easily repeat these actions over and over again. Control and desire have been strong Mad Men themes for five seasons now but they seem particularly overt this year. Are we going to see more control from the characters or will they let desire win? Can Don return to top creative form?

What did you think of the episode? Did enjoy seeing Betty? Or do you feel like the episodes suffer when she is around? Let us know your thoughts in the comments.