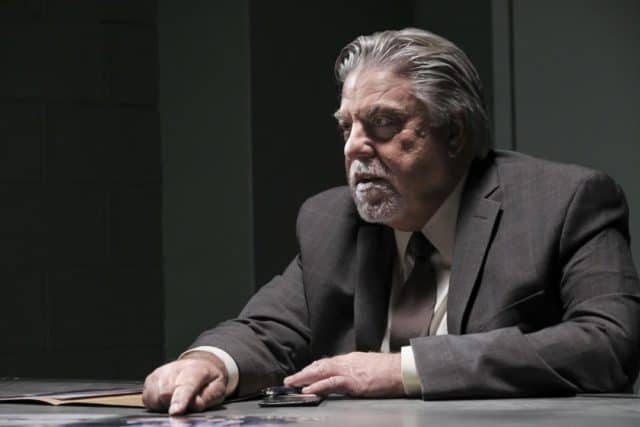 Merry MacGyver Christmas everyone! As if we needed another reason to love MacGyver, this show provided a two-part holiday gift. The first, MacGyver still believes in Santa! At the very least, he has done the math that has convinced him that the existence of Santa cannot be ruled out. The second, this week’s intense case brought back Bruce McGill, otherwise known as the original Jack Dalton. While we’re happy to see his face, we’re not so happy as to the reason for his visit. His mission is to put a permanent lump of coal in MacGyver’s stocking, by arresting him for murder. If you think that’s bad, just remember that’s the enemy who makes himself known. The enemy who lives in the shadows until the last possible moment is the one who really wants to ruin MacGyver’s Christmas.

The LAPD claims that MacGyver accidentally killed a civilian maintenance worker on an undercover mission. Phoenix thought the mission was textbook, seeing as they accomplished ridding an entire warehouse full of illegal German rifles the CIA wasn’t allowed to retrieve. Phoenix is caught completely off-guard, and must go over every single step of the case. This is all while trying to find out how the LAPD found out Mac was responsible for the bomb. Ironically, it is harder for Riley to crack LAPD security because their system isn’t up to date. Jack climbs the walls, desperate to figure out how there could have been a dead body in the rubble.

The Phoenix Foundation does not want the LAPD to find out what Mac does for a living. Unfortunately, Detective Greer (McGill) is very good at his job. With all of the evidence they have, LAPD charges MacGyver not just with murder, but domestic terrorism. The biggest problem is that the picture the detectives paint of who MacGyver is kind of sounds right. If we didn’t know MacGyver, the profile would actually be spot-on. Greer is a thorough detective who goes where the evidence leads him. He’s not the kind of cop who deals in speculation or coincidences. This means Phoenix has to double down to figure out how such qualified operatives as themselves could have made a mistake.

Long story short, Jack left the door open. Luckily, Bozer spotted the victim outside of the building before it blew, and Mac confirms to Jack (after a cheesy Mission Impossible entrance) that the body shows no evidence of being near the blast zone. Stranger still, Mac realizes that he got a little too lucky finding the materials he needed to build the bomb. It was too perfect, it had to be a setup. The lowly maintenance worker was actually a lookout for a drug cartel. He failed to keep people away from the warehouse, and paid the price. When Matty finds out the cartel leader got into the LAPD, she risks blowing Phoenix’s cover to save Mac. I’d call this enough proof that whatever Matty is hiding about Mac’s father, she isn’t a traitor.

As impressive a detective as Greer is, he can’t make an exploding dart from a ballpoint pen and gunpowder. After Mac saves the cops from the cartel guy, Detective Greer and Mac call it even. As a reward, Matty gives MacGyver back his paper clips! If you thought that was a Christmas miracle, there’s a certain present under MacGyver’s tree that has tell-tale wrapping paper from his father.

Before we rejoice in the joy of three Christmas miracles, there’s the MacGyver version of Krampus. Cage will be late for the holiday celebration, since she has just been shot by Murdoc. Let’s hope Cage survives to see 2018.