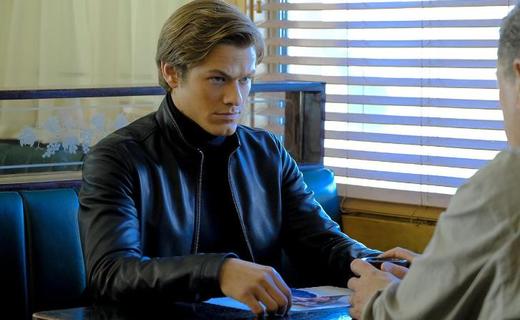 The relationship between this Murdoc and MacGyver isn’t anything like a typical cat-and-mouse game. It’s not as simple a matter of them chasing or taunting each other. It’s what they bring out in each other. We’re getting the first glimpses of that as the first season concludes. MacGyver will always be MacGyver, but we don’t ever really know what a person is capable of until they are put to the test. The right enemy is the perfect person to push those buttons.

A terrorist group named Omnus wants Murdoc to kill a mark only known as ‘The Architect’. There’s no way in hell the Phoenix Foundation is going to allow Murdoc out of maximum security for a second. Luckily they don’t have to. No one knows Murdoc is imprisoned, and no one even knows what he looks like. So MacGyver decides to go undercover as Murdoc, provided that Murdoc agrees to help. Mattie gets to the root of who Murdoc is, by getting to his weakness–his son. She’s willing to go as far as threaten to release Murdoc’s identity to the world, effectively placing a target on his son’s back.

MacGyver can bluff and build his way out of any situation, but as himself. Murdoc has to wheedle MacGyver’s inner anger and turmoil and bring it to the surface. It’s not enough to act like Murdoc for this job, he has to embrace the very essence of who he is. MacGyver has no choice but to go off on his own. He does so good of a job he scares himself. MacGyver gets close enough to the line of killing someone as he can. Simply that he could terrify a man that much is disconcerting to him. Once he assures his target there is nothing to fear from him, MacGyver is confused as to why he was hired to kill a man with worthless information for $10 million. Murdoc’s mark has been looking at someone hiding data in phones, and that someone is none other that the Organization, aka Omnus. They had to change their plans once Thornton was caught, but they never went away. They set this all up as a test to catch MacGyver.

The good news is that Bozer and Riley get to catch one of Murdoc’s smaller scale clients. Occasionally Murdoc would kill for free, just for the fun of it. So Bozer and Riley take on the job of finding a walking, cheating midlife crisis who killed his young girlfriend. Even better is that Jack is able to come to MacGyver’s rescue just in time. The problem is that the prisoner they capture wanted to get caught.

Whatever the game is, it’s just beginning.

MacGyver reaches back to its roots for inspiration when our titular hero must get inside Murdoc’s head.