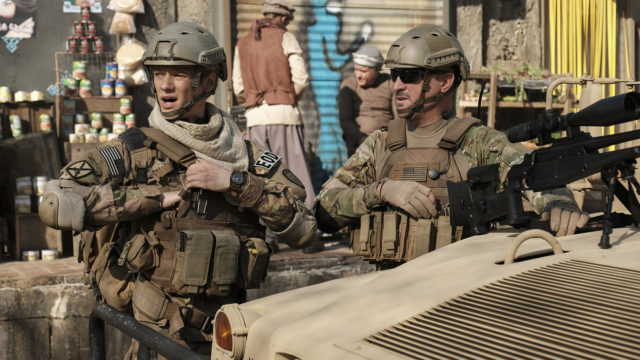 What better way for MacGyver to ring in the new year than with several mysteries to solve? The question for more than one of the people MacGyver is looking isn’t who they are, but where they are. The biggest mystery for awhile has been the search for Mac’s father. That trail was dead for a good long while, but burned brighter than the Christmas lights when a package from the man himself appeared under Mac’s tree. As if that mystery wasn’t puzzling enough, MacGyver gets a visit from his second greatest enemy: The Ghost. (On a side note, can we take a moment to appreciate that MacGyver has so many enemies, we have to rank them? He must be doing something right.)

Team Phoenix spends Christmas at the hospital waiting to see if Cage survived her gunshot from Murdoc. Thankfully, she does. After hours at the hospital, instead of taking a nice nap, MacGyver has to dismantle a bomb set in his house by the Ghost. The problem is that the bomb seems to be everywhere, and the slightest electrical surge could trigger it. That means no phones or computers of any kind; or at least, almost any kind. The Ghost didn’t know Mac could make a photo phone, which uses light to communicate. Pay attention in Physics, kids. This invention would actually make a very cool school science experiment. Second thing to remember: Stoichiometry, which is covered in chemistry. It is a huge pain, but maybe it’ll save your life one day. Or maybe it will just cause someone like Jack to compare you to ‘Bill Nye, The Science Guy’.

The experience is checkered with flashbacks to the first time Jack and Mac met in Afghanistan. To say they didn’t like each other would be an understatement. Isn’t it grand that the two found a way to get along? Who else would make Mac laugh in dire situations, and who would get Jack out of those dire situations he gets himself into? If it wasn’t for MacGyver, Jack would have finished out his tour and retired. Instead he chose to stay in Afghanistan, and build his partnership with MacGyver. We know how the rest turned out.

Despite all of Mac’s experience, the bomb under his house ends up being like nothing he has ever seen before. It’s big and dangerous, and has a twin. Two bombs is two too much for MacGyver to handle. Even calling in his friend Charlie to handle the second bomb isn’t enough. The second bomb is driven over so that MacGyver can disarm the bombs at exactly the same time. If MacGyver hadn’t succeeded, there would have been a lot less real estate in Los Angeles. Mac’s biggest regret, aside from not saving thousands of people including himself, would have been not finding his father. In the middle of all this madness, Jack found a clue. A series of numbers etched into a cog in MacGyver’s father’s watch, which match the numbers tattooed on him (or his grandfather?) in an old picture that looks like it was taken in a concentration camp. Is anyone else confused?

Are there any theories out there as to what these latest clues mean? The search for MacGyver’s father is officially heating up.

Memories of MacGyver and Jack’s first meeting guide a thrilling winter premiere which finds Mac having to disarm a unique bomb.