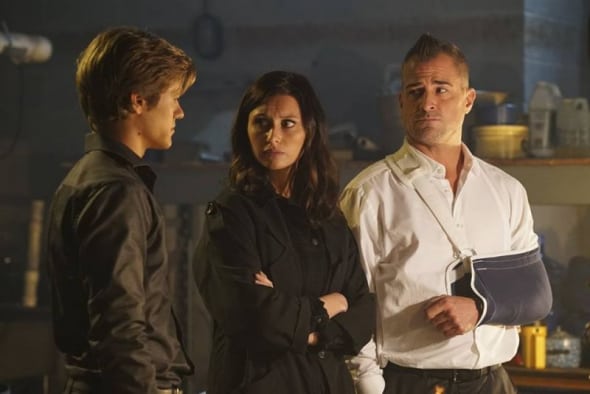 Contrary to popular belief, MacGyver has friends outside of the Phoenix Foundation. Usually he is able to balance them just fine. The only real conflict MacGyver had was keeping his work a secret from Bozer. Now that Bozer knows, the gap between MacGyver’s past and present, and his private and public life, seems to be filled. However, there was a time when MacGyver needed the company of other minds similar to his own. If Jack thought he was impressed with regular MacGyver, he is doubly impressed by stories of College MacGyver.

Fresh off of accidentally putting Jack in the hospital, Mac gets a call that his best friend from M.I.T. was killed in a random accident. Once MacGyver and Jack get to Boston for the funeral, their suspicions and eyebrows are raised. Why would Frankie’s graduate supervisor get into an accident a month before her own? Why would someone be taking pictures of her funeral? Why would Frankie’s case be deemed an accident when all MacGyver sees is a bomb site?

The simple answer is that Frankie isn’t dead. To MacGyver’s relief, she faked her death because someone was trying to kill her. Frankie was using a new method of recovering degraded genome sequences on a cold case the Boston Police Department gave her to test. So MacGyver builds Frankie a makeshift lab she can use to continue testing her blood sample. During this process, MacGyver explains exactly how he went from boy genius to spy. He was on the path to being a genius scientist, but when his grandfather’s old Army buddy died, it shifted MacGyver’s perspective. He realized he had gifts he could use to help people everyday, not just in theoretical, future ways. Once Frankie’s science gives Bozer what he needs to reconstruct the face of her would-be murderer (her research donor), Frankie is able to resume her normal life. As great as it would be for MacGyver to be around other geniuses like him, he’s needed elsewhere.

Oh, the road not taken. It’s something Bozer spends a little too much time focusing on, since his friendship with Riley is not advancing in the way he would have liked. Both Mattie and Jack push Bozer to get over Riley since she seems to be happy with her long-distance ‘friendship’ with the guy she met in Hawaii. In the end these two are just better off as friends. Whatever is meant to happen will.

Now a show of hands: who would love a full flashback episode to MacGyver’s college days?

Some light is shed on MacGyver‘s college days when he returns to M.I.T. for a friend’s premature funeral.