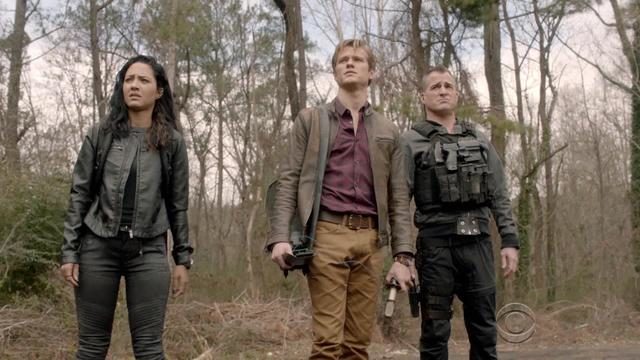 You would think an episode based in Chernobyl would have enough danger with the constant threat of radioactivity. But MacGyver had not one, but two dreads looming over the last episode. The first was making sure Mattie did not discover how much her team knew about her involvement with MacGyver’s father. Mac needs time to figure out what he wants to do about this before he confronts her. The second dread was much more hilarious, and frustrating, in the particular geographical context. Who would have thought that we’d have to be afraid of Jack Dalton’s sneezes?

MacGyver no longer knows if he can trust Mattie. She lied about knowing Mac’s father, neglecting to mention from the beginning that she lead an investigation into the man when she worked for the CIA. Given that she has lied to Mac, and this is not the first Phoenix director to burn him, Mac has more than enough reason to be upset. But Mattie is not Thornton. Deep down, MacGyver knows that. He knows that at the very least, he can trust Mattie with his life. That’s a good thing, considering Phoenix’s next mission takes them to Chernobyl.

Phoenix goes in to apprehend an elusive Ukranian bad guy about to make a deal for his freedom and protection from the mob. Until, that is, he got spooked by Jack’s sneezes and ran. Idiot that he is, he ignores the big, bad “Beware” sign that says he is entering Chernobyl. The place looks as bad as it sounds, the closest thing to The Walking Dead we will ever see. No one is thrilled to be going further into the hot zone, but they must in order to capture their criminal. It would be nice if the guy would stop getting kidnapped. It would also be nice if Mac and Jack didn’t have to get information from silly millennials who think it is cool to hang out in abandoned, radioactive towns. But beggars can’t be choosers.

Mac, Jack, and Riley find their man taken hostage by a large group who have trespassed onto the site in order to steal radioactive waste. That type of ammunition could sell on the black market and level cities for thousands of years. And it’s not as if the area is well-regulated, so the operation ran pretty smoothly. That is until, Phoenix tried to pick up their guy, who betrayed the scary men in white hazmat suits. After some wrangling, and another close call courtesy of Jack’s sneezes, they get out of Chernobyl alive.

Here’s another reason Mac can trust Mattie. She’s a good boss and a good friend. She is even willing to give Mac credit for conducting the operation his way. My bet is that whatever Mattie is hiding, it’s to protect MacGyver, not hurt him. I’m also willing to bet that she’ll tell him when she feels the time is right. This is a woman fiercely protective of her team. Everybody can keep their cards close for now. It’s just going to come to a head sooner than they imagined.

Why do you think Mattie is lying to MacGyver?

MacGyver avoids confronting Mattie about her secrets by going to the deepest, deadliest part of the world.