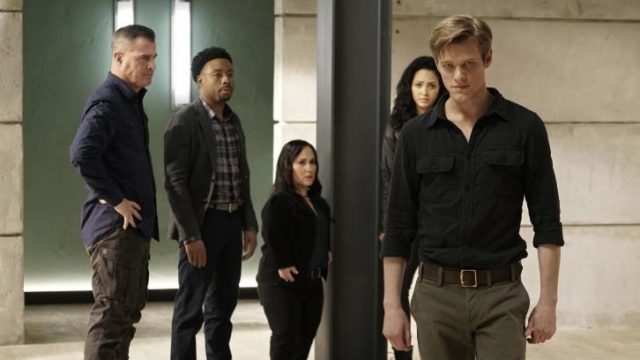 For two seasons we’ve seen MacGyver go through a range of emotions, especially when it comes to the search for his father. The one emotion we’ve never seen was the one that was magnified tenfold during the season finale: anger. He’s been angry with his boss, Mattie, since he found out that she knew his father and lied about it. In the season’s final hour, Mac not only got to confront Mattie, but his father, the one and only James MacGyver (guest star Tate Donovan). Let’s just say that this long overdue father-son reunion was worth the wait.

How did Riley’s relationship with her father become the least complicated relationship on the canvas? Even after walking in on her and her boyfriend less than decent, Elwood still has a monopoly on the stable parent-child relationship. From the first minute MacGyver reunites with his father, he is mad as hell, and I don’t blame him. Not only was James close by all along, he is Oversight-as in MacGyver’s boss. Instead of answering his son’s questions about where and why he hid for so many years, James takes Mac and Jack on a mission to Mexico City. It’s not until they arrive that James tells them they are hunting his former partner who turned traitor. Jack accurately describes it as if Mac was hunting Jack 10 years down the line. They do eventually find James’s partner, trying to perfect a drug that makes men into super soldiers. He threatens Mac so that James will continue the work, but that was a mistake. One MacGyver is tough to take down, but two? That was a losing battle, even if they both do make things up as they go along. And yes, it is doubly annoying.

The mission is both emotional and historically telling. The way James describes it, he has been pulling the strings from Day 1. He was even responsible for Mac and Jack’s partnership. And from what he’s saying, it’s not the first time it’s been done. Phoenix was created post-WWII to specifically put together soldiers and scientists. When James took over as Phoenix Oversight, he made sure to hire his own son so that he could keep an eye on him. But that was after he’d left him. And what’s more, James never wanted his son to know who he was. James has not been the one giving Mac clues all year. That was Mattie. She thought Mac deserved to know the truth, but couldn’t outright tell him without breaking her oath.

Mattie found a way to be truthful with Mac, albeit using a heck of a lot of subterfuge. Mac Sr. had no intention of ever telling the truth. That was bad enough. He then chose to manipulate his son’s entire life from a safe distance. Is it any wonder Mac quits Phoenix? The hypocrisy of James expecting his son to trust him, when they just got through a mission chasing his own untrustworthy partner. At least Bozer will have Leanna around to comfort him now that his best friend is gone.

Now for the bigger issue: can Phoenix survive without Angus MacGyver?

MacGyver finally gets the long-awaited father-son reunion, but it wasn’t exactly a happy one.