Home
Television
MacGyver
MacGyver Review: How To Be MacGyver 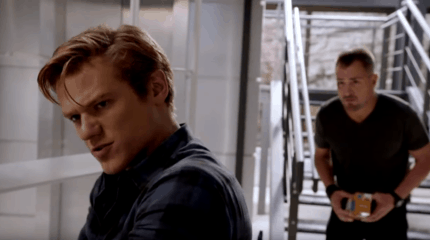 MacGyver is the funnest of fun procedural shows, with the titular star always ready to get himself out of any tight spot. If there’s a way, MacGyver will find it. What do you do when there isn’t a way? How do you deal with the awful probability, not possibility, that things are going to go horribly wrong? Sometimes it doesn’t matter how hard you try, or how many Star Wars references Jack can make. When there isn’t a way out, that’s the true test of sacrifice. MacGyver just hasn’t had to feel the weight of that sacrifice in a very long time.

Bozer is sacrificing a lot to continue in spy school, but remembering his brother’s death took a lot out of him. He can’t survive that kind of loss ever again. Bozer and Leanna face their last test together. The school drugs, kidnaps, and handcuffs the two in a room together, all before sicking a machine gun-wielding man on them. They survive by relying on each other, and reach the end of the line successfully. Just as they admit their feelings toward each other, they’re told that for security reasons, they can never see each other again. After everything they’ve been through together, Bozer and Leanna aren’t about to split up now. They’ll find a way, rules be damned.

Speaking of breaking the rules, we finally know why Elwood is being threatened. He and his partner Dougie stole a $75,000 Jackie Robinson baseball and agreed to split the money. When Elwood decided to straighten up for Riley, he threw the baseball into the Hudson River. If Elwood was stupid enough to throw away a signed Jackie Robinson baseball, I’d say he deserves a little bit of the beating he has coming. Unfortunately, getting Elwood out of this trouble isn’t going to be easy. Dougie has a lot of friends, with a lot of muscle, and even more ammunition. Riley, of course, finds out. She’s immediately in on the plan to forge a $75,000 baseball. Who was Jack kidding? He wouldn’t have had a clue how to utilize Phoenix’s resources to make a fake baseball. But Dougie wants interest on his payment. Elwood really has changed. He would rather have taken a brutal beating than take an easy way out, all so that he could have a clean slate for Riley. This act turns Jack’s opinion of Elwood around. Only a true sacrifice, risking his personal safety for a chance with Riley, could have done that.

Of all of the sacrifices made in this episode, you desperately hope no one makes the ultimate sacrifice. MacGyver must help a group of researchers survive when their ship gets stuck in the Arctic, and help won’t get to them before they freeze to death. MacGyver is essentially teaching the lead researcher, Zoey, how to be him. The difference is that MacGyver is used to life-and-death situations. Zoey is not. Because Mac is a science guy as much as he is an agent, he knows that the one thing that connects the two professions is a steady hand. Whether you are working in a lab or being hailed with bullets, you absolutely cannot panic. After Mac takes the time to calm Zoey down, the real work begins. He teaches her how to restart the generator, how to clean smoke-filled air, and how to make a special puddy that detonates.

However, the ship faces a horrific, Titanic-like situation. The ship takes on too much water, and the only way to buy enough time for the crew is for one person to shut the compartment door from the inside. Zoey sacrifices her life for the lives of 31 other people. MacGyver has done a lot of difficult things, but staying with Zoey, watching her drown to death, that was one of the hardest moments to watch in the entire revival’s history. For a show that is usually fun, when it goes for the gut, it really goes for it. And whatever suspicions MacGyver has about Matty, she is the one to stay with him when it’s all over. Family shows up.

MacGyver must teach a researcher stranded in the Arctic how to MacGyver the ship’s resources to keep her team alive.