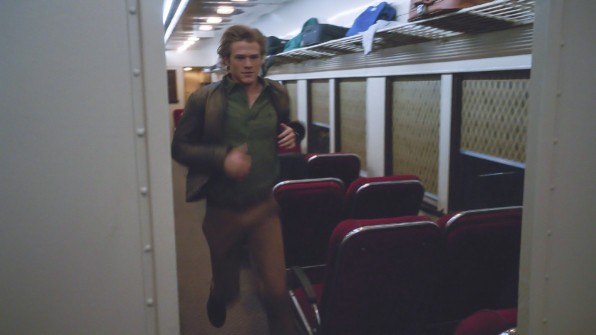 If I needed more proof as to why trains are not the safest way to travel, this week’s episode of MacGyver would be Exhibit P (my evidence list is long). ‘Strangers on a Train’, ‘Murder on the Orient Express’, ‘Runaway Train’, and literally every single train accident are proof. Nothing good comes from trains, but that’s just my opinion. It may be the opinion of the Phoenix Foundation after their thrilling journey on this week’s MacGyver.

Before the team is called to deal with this high-speed debacle, they have a few personal issues to sort through. Bozer takes his role of playing Riley’s boyfriend very seriously. He worries that they’re not really selling it to Riley’s parole officer because of her detached attitude. She counters that he needs to tone down the hyperbolic posturing and just be himself. Either way, playing hit the rubber duck into the swimming pool is fun with anyone. Jack is thankful that MacGyver is putting himself out there again after the whole Nikki debacle. MacGyver is a catch, and evidently the girl he went on one date with agrees. Nikki is always lurking though. He manages to track her all the way to Portugal, only for her to slip through his fingers with only a mysterious key as a parting gift. MacGyver doesn’t seem to be clear on why he wants to catch Nikki. No time to dally when there’s work to be done.

The Phoenix Foundation reroutes to Berlin to find Katarina Wagner, a woman who has turned against her defense contractor boss Eric Wexler. Katarina contacted an Interpol agent to let them know Wexler was selling weapons to enemies of the U.S. The agent is killed before he can stop Katarina from accepting a train ticket he did not send for her. MacGyver, Jack, and Riley have to intercept Katarina on the train. Thornton sets up camp at the end of the line in Frankfurt to catch Katarina’s would-be assassin. She doesn’t count on there being more than one assassin in the room, and one slips away amidst a gunfight in the train station. Honestly, this woman is in charge?

The operation is completely blown, but the Phoenix Foundation has bigger problems believe it or not. They don’t have time to regroup before the rest of Wexler’s men board the train while it is moving! Even worse, they split up to cover more ground. MacGyver locks Katarina in a bathroom on the opposite end of the train with a taser he made from a man’s electronic razor (now this seems like something a girl should know how to make). He and Jack tackle the guys heading for Katarina’s suite, leaving Riley alone to guard Katarina. Did we mention Riley hasn’t had any martial arts training yet? The girls just have to improvise. Collectively they take out half the kill team, then have to worry about the other half who get smart to Riley tracking their cell phones.

Riley, MacGyver, and Jack take care of a few more of the assassins, with MacGyver going so far as to pull Katarina into a passionate embrace to temporarily escape. In Frankfurt Thorton plants a bug on Wexler, for all the good it does warning the team before Wexler’s men sabotage the entire train. They removed every single fail safe method of stopping the train. If they can’t stop the train’s crash, then they have to decouple the cars to save the passengers. This part of the plan works. I suddenly have a very vivid childhood flashback to the 1997 animated joy that was ‘Anastasia’. Except MacGyver and Jack end up on the part of the train that’s still barreling ahead. MacGyver gets under the train as it is going over 200 mph to switch the wiring, basically putting it in reverse. Now I’m really having ‘Anastasia’ flashbacks. Mac stops the train and sends Katarina on her way to testify against Wexler. He talks about gaining perspective, yet the first place he goes upon returning from Frankfurt is Nikki’s apartment. Yes, he wants to catch her, but will he really get closure if he does?

Is MacGyver in denial? Show of hands, who else can name a disastrous train-related story?

MacGyver‘s latest challenge is to stop a runaway train.