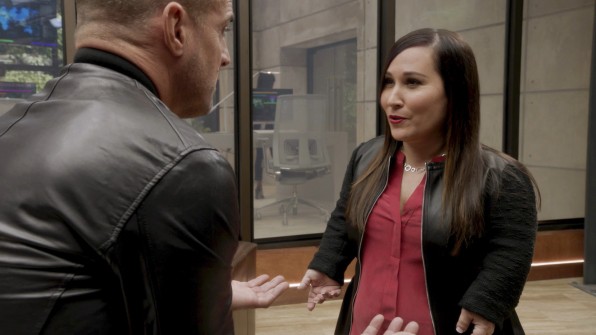 MacGyver and the rest of the Phoenix Foundation have been sorely lacking in quality leadership. Finally the new sheriff in town is going to take the reigns and guide the team towards a more productive, cohesive working environment. Now as we’ve already established, Jack and Mattie have some very scary history together from their time at the CIA. Everyone is nervous about their evaluations with Mattie, except for MacGyver, whose evaluation keeps getting mysteriously postponed. As Mattie gets to know the members of the team this week, they all learn something about themselves and how their roles will be clearer moving forward.

Mattie’s first case with the Phoenix Foundation utilizes a new facial recognition software that Riley has been developing. The software recognizes Douglas Bishop, a Philadelphia mobster at the top of the FBI’s Most Wanted List for killing an FBI agent. Mattie thinks that the FBI can’t be trusted because they have almost caught him multiple times. Jack and MacGyver head to Atlanta to catch Bishop, and aren’t there for two minutes before the FBI shows up. The problem is that those FBI agents are from Bishop’s hometown of Philadelphia, making it more likely that there is a mole in the FBI. The regional director for the FBI calls Mattie personally to confirm that the agents are in Atlanta without authorization. Once Jack and MacGyver do catch up to Bishop, they learn the FBI was using Bishop to get what they wanted. The way Bishop tells the story, he never killed an FBI agent because she was trying to help protect him and expose FBI corruption.

While Bishop is with Jack and MacGyver, he opens up to them. Together they commiserate over not being able to be with their lost loves. Bishop fell in love with a local convenience store worker, but knows he can never be with her. He’ll have to settle for the few spare moments they’ve built a connection before being handed off to the FBI. Bozer may not have the same skillset as everyone else in the Phoenix Foundation, but he has keen intuition. He realizes when Jack and MacGyver are led into a trap just in time for them to save themselves and Bishop from the FBI agent who really did commit the murder. Ironically Bishop feels free because he doesn’t have to keep looking over his shoulder, and he’ll get weekly dates from his lady friend.

Throughout the episode Mattie is as tough as she seems. She scares everybody. Jack especially gets this look of panic and regret everytime he thinks about her. She really comes down hard on Riley, identifying her as Artemis 37, the hacker ID that broke into the Pentagon just because she wanted to. Mattie’s stern threat to Riley is for her protection as much as it is for the Phoenix Foundation. Mattie has an even tougher conversation with MacGyver. She genuinely cares if MacGyver lives or dies, which is why she can’t condone his inclination towards improvisation as a first line of defense. They’ll have to work together to retool those skills in the field. The only person who didn’t have anything to worry about was Bozer, who has immediately earned Mattie’s trust by standing up to her and going with his gut.

Do you think Mattie the Hun is the leader the Phoenix Foundation needs?

The Phoenix Foundation’s new boss turns things around, and makes a challenge to MacGyver.