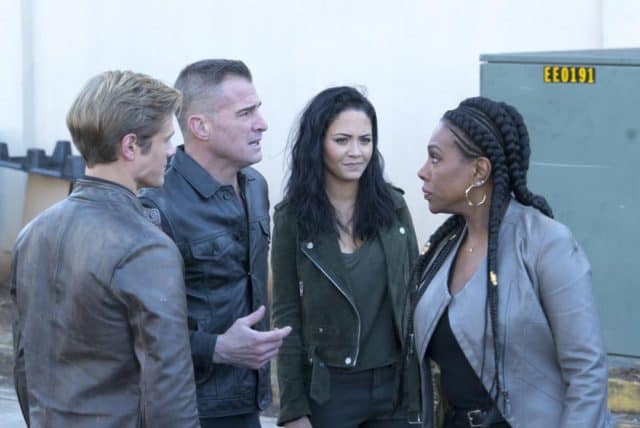 MacGyver‘s biggest obstacle this week isn’t a criminal, it’s bounty hunters. Phoenix has dealt with many formidable opponents, but none come close to the deadly whackiness that is the Colton Family Bounty Hunters. Their title is capitalized as they deserve that kind of respect, something MacGyver and company learned the hard way. The last time the team ran into the Colton family, they were a big obstacle in the way of getting their suspect. This time around, they have to work together to avert disaster.

Phoenix tracks Emil Beck, a former government computer nerd who ran off with classified data. After over a decade of searching, Mattie and Jack are highly motivated to catch Beck. Nothing annoys them more than letting a criminal escape. So off to Atlanta we go. However, once Mac, Jack, and Riley land on the ground, they run into the Colton Family. Needless to say, Mama Colton’s disposition towards law enforcement is still as sweet and deadly as it was the last time she and Phoenix met. The good news is, since this isn’t Phoenix’s first run-in with the Coltons, they don’t let their guard down. Riley hacks the Coltons, who did a very impressive job findingÂ Owen Palmer, Beck’s latest criminal associate.

Using Palmer and the Colton’s knowledge, Phoenix catches up to Beck. But in the middle of their tug-of-war with the Coltons, Beck gets away. The two teams do the only thing they can do in this situation, pull their resources and work together. Mattie figures out that Beck came back to steal classified software that has the ability to make any plane drop out of the sky. Once the Coltons, Mac, and Jack infiltrate the party, they find that Beck has already submitted a test demonstration for his buyer. What’s worse, is that he sabotages the plane Riley and Billy Colton are on to take Palmer back to Mattie.

Riley’s a genius on the computer, and she’s even done her job like her life depended on it, because it has. But there is a particular type of pressure in hacking a plane you are on before it crashes. The only thing Riley can do is reboot the plane just like a cell phone, which requires her to shut down the plane. As Riley’s plane is literally falling out of the sky, she forms a bond with Billy. The guy was already making some very good points about the bad “relationship” she was in, and that she deserved to be treated well. Once the plane is back on the ground in one piece, Billy makes good on this point. As a thank you for saving his life, Billy gives her a much needed drink, and a rose. A man who finds a rose minutes after an emergency landing is a keeper. Not sure how Jack will feel about Riley dating Mama Colton’s son, but that’s nothing against Billy. Any guy who treats Riley well is (eventually) okay in Jack’s book.

Do Riley and Billy make a good match, the next great love story of the Hacker and the Bounty Hunter?

Riley forms a bond with a bounty hunter during a mission on the latest MacGyver.