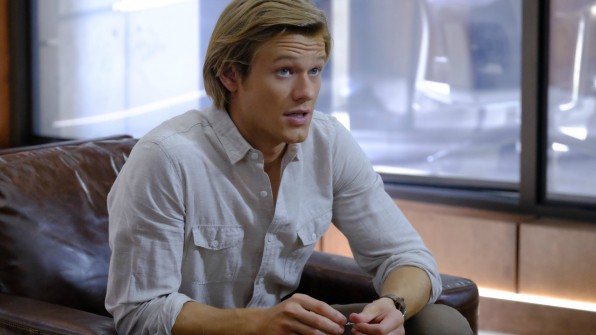 Everyone has a bucket list. Even when you think you don’t, you do. It’s a list of things you want to do in your life, which should definitely be expanded if your job is high risk. MacGyver  takes an interesting perspective this week as the titular hero for the first time considers long-term goals beyond the week to week mission. After all, MacGyver is an amateur physicist/spy by trade. If he can transfer that over into an amateur doctor, then anything is possible.

The episode opens with Jack and MacGyver in a hot spot, literally. MacGyver accidentally set the place on fire, which gets the guys thinking about their fathers. Jack had a good relationship with his father till the day he died. After every risky mission Jack goes to his father’s grave to talk him. MacGyver’s father walked out on him at a young age, so there isn’t alot of love there. Nothing changes if you don’t want to move forward.

The Phoenix Foundation is tasked with finding the link to a terrorist group in Malaysia before they can strike again. Their way in is through an American fugitive named Ralph Kastrati. Kastrati was a tech millionaire who fled the country on over 500 federal charges. He is now the self-proclaimed “money-man” for the terrorist group. He’s also the biggest pain ever. Think if the Kardashians had a pimple. Yeah, that annoying. He even takes a bullet from a sniper and continues to complain about the care he’s receiving. He’s the target though, wanted very much alive by the U.S. Kastrati nearly drowns in his own blood, which means MacGyver has to play doctor. Riley commandeers a local physician out of his afternoon golf to walk MacGyver through surgery in the back of a car. It might be the only time blood has been shed on a car windshield without the intent of death.

The spontaneous surgery works, but the terrorists won’t stop until they’ve killed Kastrati so he can’t snitch on them. They don’t have to kill Kastrati, they just have to think that he’s dead due to the bullet they already put in him. So MacGyver not only has to play surgeon, but anesthesiologist. He gives Kastrati beta-blockers to slow down his heart rate enough so that he passes out and everyone thinks he’s dead. Then MacGyver will give him the drug to counteract the beta-blockers. That plan only works if they don’t have Kastrati’s body. The terrorists plan to hack him up for their own peace of mind. The team is just barely able to get to Kastrati in time to give him the antidote. When they get Kastrati back to the U.S., he agrees to testify in order to get witness protection. Somehow I don’t think even witness protection will want him.

MacGyver isn’t ready for any life-changing moves or shifts in pace. That doesn’t mean he shouldn’t want to start making goals, so he can at least say he tried. Jack made everyday with his dad count. Kastrati wasted every day of his life scamming. The least MacGyver can do is try to reach out to his Dad. He owes himself that much.

MacGyver’s tricks in this episode were especially useful if we’re ever in any life-or-death situations with no medical personnel. Did the episode live up to substantial story snuff?

MacGyver tries his hand as an amateur physician in this week’s subpar episode.