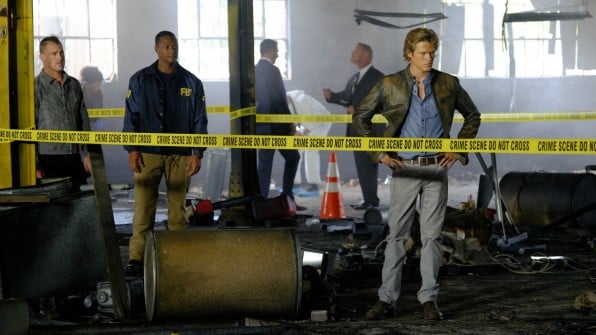 MacGyver deals with high stakes situations all the time. Nothing says high stakes like pressurized explosives, yet that’s only one component of MacGyver’s strain this week. With Halloween coming up it’s the perfect time for ghosts. MacGyver is confronted with a ghost from his past (who just happens to be called The Ghost). What makes Halloween scary is what makes this case scary. Nothing has more power to scare you than something or someone that’s already taken a piece of you.

FBI Agent Charlie Robbins, a former bomb tech MacGyver knew from the DOD, calls Mac in for a favor. Charlie found a bomb planted near the United Nations made by someone MacGyver used to be familiar with. The main component in the bomb is Petin, a chemical used in heart medication, designed to make a large, fast-detonating bomb. Even that is concealed within the bomb, which contains another bomb inside it. It’s the signature of a bomb maker known only as “The Ghost”. MacGyver knew him back when he was stationed in Afghanistan diffusing IEDs. MacGvyver barely has enough time to move the bomb before it blows FBI headquarters sky high. When Riley and Jack get to New York, Riley uses the SIM card embedded in the bomb to trace the Ghost’s location. What’s waiting for them when they get there? Another bomb, what a surprise. Again, MacGyver is barely able to diffuse the bomb.

MacGyver is much more subdued during this investigation than usual. The Ghost left a very particular scar on MacGyver’s psyche because his bomb killed MacGyver’s Commanding Officer Alfred PeÃ±a. While the FBI collects evidence from The Ghost’s apartment, they find footage that he kept of every single bomb he made. This includes every single kill. Jack clears the room so MacGyver can hear the last words PeÃ±a ever told him, which he didn’t get to hear originally because his Coms had cut out. In his last moments, PeÃ±a thanked MacGyver for covering him while he went home to witness the birth of his daughter. Then everything went up in flames. PeÃ±a’s lessons guide MacGyver through the rest of the investigation.

Riley is able to sift through the Ghost’s financial records to find a second property he owned. The building goes up before the team can take a step towards it. Everyone thinks the body inside the building is the Ghost, but MacGyver doesn’t buy it. This guy’s too good to accidentally blow himself up, no matter how sensitive the incendiary. MacGyver’s instincts are right. The Ghost is alive and he does have another explosion planned, but it’s not meant for the UN. The Phoenix Foundation catches up with the Ghost, who purposely planned for them to get that close. Jack tries to run after him and steps on a pressure plate. Once again MacGyver has to diffuse two bombs to save his best friend. As stressed as MacGyver is during this whole ordeal, I don’t think I’ve ever seen Jack so scared and vulnerable. Everybody is more than happy to do normal things for the rest of the week. Jack and Riley join Bozer in making Presidential Prosthetic Masks for Halloween. MacGyver pays a long overdue visit to PeÃ±a’s daughter to tell her about her dad.

MacGyver was exceptionally vulnerable this week. How many walls does he actually have up?