Home
Television
MacGyver
MacGyver Review: The Roles We Fill, and The One Riley’s Dad Doesn’t 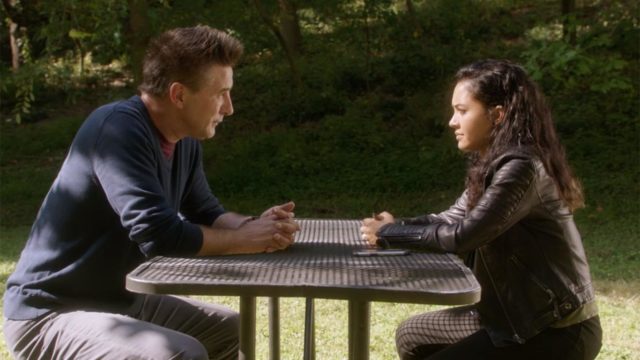 MacGyver‘s family just experienced an intense paternal reunion, but it wasn’t the one that’s been building since last spring. The mystery behind MacGyver’s father is simmering, but Riley is the one who reunited with her dad. Recall that Riley’s dad (played by Billy Baldwin) had some pretty serious issues before he finally took off for good. It took a serious beating from Jack to push the guy out the door, and that backfired on Riley in several ways. She lost both of her fathers. Is there a chance she could have both of them back in her life?

The case of the week is what helps Riley figure this out. The Phoenix Foundation went after Enzo Lamaire, an art trafficker who transfers the funds to terrorists. Mac and Jack go in as art thieves, complete with proof to back up their claims. Suffice it to say, Jack does not scream “art thief”. He’s the one who sits on art. He is, however, as tough as they come. He’s at his best when he’s protecting someone, which is exactly what he does for Riley. He’d gladly take any amount of torture in Riley’s place. Not a hair on Riley’s head is touched (even by MacGyver’s crazy fiery packing peanuts). Still, bloodied and bruised, Jack’s first concern is if his surrogate daughter is alright.

There is no more vulnerable place for a spy to be in than compromised by a liar. It’s even worse when that pathological liar is family. It took Riley decades to get over all that her father put her through. Jack has been more of a father to Riley than Elwood (Elwood, really?) ever has been. Case in point: Jack immediately knows that there is something up with Riley, and Mac reminds him that there are some things girls don’t want to tell their dads. When Riley is ready to tell Jack, she will. For the moment, Jack really doesn’t need to know. As scary as Jack can be when he’s angry, Matty is absolutely terrifying. I don’t know how she knew, but right away she figured out that Riley’s dad was in town. She took no time in tracking him down and threatening him if his intentions weren’t pure. Both Matty and Cage confirm they see no signs of subterfuge in Elwood’s eyes. Maybe he’s lying, maybe he isn’t. He’s just not Riley’s father, Jack is. If Elwood wants a place in Riley’s life, he’ll have to settle for a friendship. He can’t take a role that belongs to someone else.

Even though Phoenix got their man, so much of it was clouded by emotional, personal problems. Someone needed a clear-cut, home run type of win. Bozer basically spends this time in a spy training camp. Bozer rises to the occasion, and even makes friends with a cute trainee (The Bold and the Beautiful‘s Reign Edwards). However, Bozer has hands-on experience from working with Phoenix. He knows what shady looks like. Because of his keen instincts, Bozer tracks and catches a man targeting the spy school. That plot could have resulted in the deaths of all the students, as well as compromising the records of all of the alum. That may Bozer’s biggest win to date, and not just because I think he actually got a date out of it!

Will Riley’s Dad stick around and do right by his daughter, or will his presence result in another confrontation with Jack?

Billy Baldwin guest stars on this week’s MacGyver for an intnese father-daughter reunion.