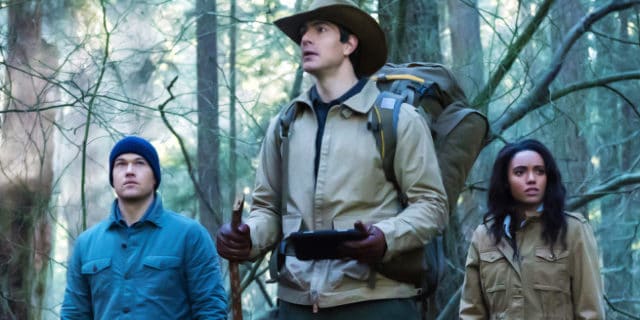 Tonight’s episode of Legends of Tomorrow takes a prehistoric turn. The team ends up in the Cretaceous Period after Evil Rip commanded Gideon to take over the Waverider. It almost makes me want to say: “Welcome…to Jurassic Park.”. Wrong time, I know, but it’s got dinosaurs so just give me this one.

It was fun to watch Nate, Amaya, and Ray find their way around the Cretaceous. I have to side with Nate, however, when Ray said that he’d cook them iguana soup. No offense to your cooking skills, Dr. Palmer, but I’ll stick with actual human food, thanks! I also wonder where Ray was able to procure the male T-Rex urine. Did he wait nearby with a container and waited for the creature to go to the bathroom?

A mind-blowing moment for me was seeing Gideon as an actual person. Sure, it’s all in Rip’s mind, but it’s nice to see the actress behind the voice of the Waverider’s A.I. That and the kiss she and Rip shared toward the end of the episode. I do hope that the writers can find a way for Gideon to become human. The guy’s been through enough with the memory-wipe and losing his family.

The whole budding romance between Nate and Amaya intrigues me greatly. Ray told the historian that he couldn’t change Amaya’s future by being in a relationship with her. It would be heartbreaking to see the Nate/Amaya thing end before it even starts. I felt for them when they couldn’t catch a break to share a kiss. Though if what Ray said is true, then Nate has no choice but to nip this in the bud. I do hope that something can be worked out. Everyone deserves to be happy for once!

Some amusing moments in this episode was the part where Nate told Amaya that he’s afraid of snakes. Surely this reminds you of a certain whip-wielding archeology professor? I also enjoyed Sara’s comment about the evil version of Mick being the same as regular Mick. Some things never change, right, Captain Lance?

I’m beyond glad to see Rip return to his old self instead of being Evil Rip. As much as I want to see him take the reigns as Captain, I think Sara is doing a phenomenal job. Her father and sister would be very proud. Maybe the good captain will retire somewhere tropical after helping the team find the final piece of the Spear of Destiny. That and locate Commander Steel.

On a side note, what does Eobard want with that astronaut at NASA?

Legends of Tomorrow Season 2 Episode 13 Review: "Land of the Lost"

Team Legends crash-land in the Cretaceous Period after Gideon takes over the Waverider. Sara and Jax go into Rip’s mind Matrix-style to change him back in this week’s episode of Legends of Tomorrow.