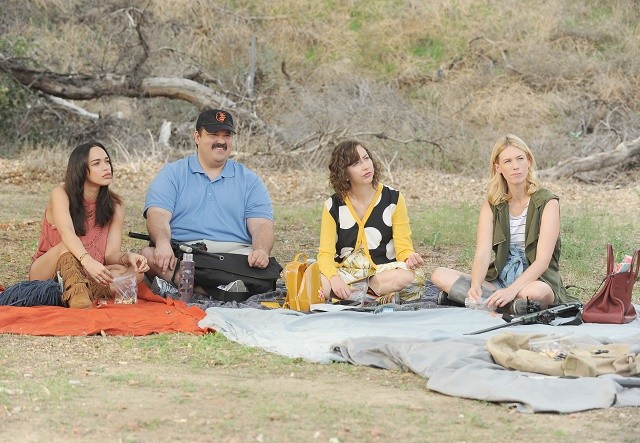 The Last Man on Earth‘s been on a roll since arriving back in Malibu, taking each half hour to bring different perspectives and stories to the table, in ways the Phil-centric Season 1 never did. As The Last Man on Earth has introduced flaws in each character, it’s slowly grown into a more three-dimensional character study, rather than just relying on its uncanny ability for cringe humor to carry each episode. A much-needed sense of community has formed around these small character/plot details, and “No Bull” ties them all together with a wonderful, bovine-themed bow.

“No Bull” even finds ways to utilize the weakest components of its cast. If anything, Melissa serves as an intriguing catalyst for both Todd and Gail’s characters, even if she’s still by far the most uninteresting character left in Malibu. Todd and Gail have both been fun this season, with their bacon/Gordon dummy stories, but “No Bull” turns those superficial story beats into meaningful character pieces. Driven by their desperation to feel a connection to someone else, Todd and Gail end up sleeping together after Melissa breaks up with him. Not the most original plot development, of course, but what those two are reaching for forms the ideological bedrock (both punsÂ intended – *double boom*) of the rest of the episode.

And what “No Bull” is really about is that these people truly need each other: in that way, this is really a holiday episode ofÂ The Last Man on Earth.Â The Malibu constituents might not be family by blood, but there’s a reason none of them try to run away – Phil 2.0 included – after the many arguments in “No Bull”: these people have become a community, equals in each other’s eyes because of their many individual flaws. Back in Season 1, everyone hated Phil because he was a terrible person; now the tables are turned, and Phil is casting the first stone (literally) while the entire group argues around him, all of them exposed to (most) of the ugliness and resentment lying underneath the surfaces of these visibly-broken people. Carol’s upset she isn’t pregnant, Erica’s upset because sheÂ isÂ pregnant, Todd and Gail both feel alone and misunderstood; there’s a surprising amount of pathos injected into the big dinner scene of “No Bull,” which slowly comes to light as Phil’s speech unravels the group entirely.

But then Phil 2.0 returns with the bull who impregnated their sacred cow; and after unintentionally tranquilizing it to death, the entire group feats on a massive meal, inviting Phil 2.0 back to the table with them. No matter how f-ed up things get, we don’t get a lot of families in life: these people, having lost theirs, are lucky enough to have found another, allowing them to maintain their humanity in the shared knowledge they aren’t alone in the world. They might not have the greatest company, sure – Gail drinks too much, Phil won’t shut up, and Carol is an awful cook – but it’s stillÂ company, and favorable to whatever they experienced from 2019 until they met each other, or what poor Mike Miller is experiencing in space, with only Terry the worm to keep him from giving up and floating through space to his death. Family isÂ everything – and thoughÂ The Last Man on EarthÂ exists in a world without holidays, “No Bull” was the perfect holiday episode of what’s quietly turned into one of the more contemplative and pleasantly uncomfortable comedies on television.