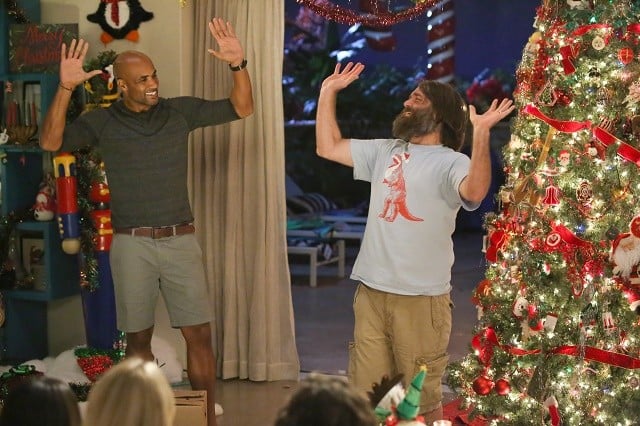 “Secret Santa” is particularly light on story, even forÂ The Last Man on Earth. Besides Carol’s obsession with Christmas decorations and the impending Secret Santa exchange, this week’s Last ManÂ doesn’t really spend much time with characters individually, relying on group scenes for the more dramatic proclamations and events. A couple isolated scenes of Mike in space aside, “Secret Santa” is a half hour of reflection, both for the characters and the show as a whole, and while it may not be the most eventful episode, it’s certainly one of the show’s most moving, emotional entries to date.

Naturally, the group selecting Secret Santa gifts for each other is an avenue for sentimentality, allowing characters to convey details they’ve shared with each other, and use their gifts as catalysts for pushing relationships in new directions. And oddly enough, a lot of the emotional thrust this story gets is from Melissa, the show’s most-maligned character. While it’s not a surprise to see her regretting her break-up with Todd, bringing it to the surface during the holidays offers a different emotional timbre than the normal “Character A wants Character B back” material. Knowing that Gail and Todd are awkwardly hooking up in secret, Melissa’s attempts to win Todd back, both with a thoughtful gift and an surprising marriage proposal, are moments that build out empathy and a bit of personality for the show’s least developed character: we can see the tragic arc forming itself a mile away, but it’s no less devastating when Todd takes off the prom sash Melissa gave him, or Todd’s face when she gets down on one knee to propose.

The same goes for Phil.Â The Last Man on EarthÂ constantly strives to make the audience squirm, and watching him try to insert himself into Erica and Phil 2.0’s relationship seems destined for horrible results. He breaks Carol’s rules, pushes Phil 2.0 to do things he doesn’t want to do, and expresses frustration over not getting credit for saving Phil 2.0’s life: everything Phil does with good intentions seems poised to screw things up, so it becomes a surprise when thingsÂ don’tÂ go sideways (especially when Phil 2.0 brings him to an empty, dark bar for a drink). Phil 2.0 ignores the Hope diamond idea and gets Erica a sonogram machine and hospital bed for Christmas, so she can see their baby for the first time.

With all its characters gathered around Erica,Â The Last Man on EarthÂ offers up its first genuinely moving scene: while Phil curses in the background, everyone stands breathless watching the small gray blotch on the sonogram screen, a poignant moment of reflection among the bestÂ Last Man‘s ever offered. Erica finding hope inspires Melissa to do the same, proposing to Todd (to Carol’s absolute glee) in the episode’s closing moments – only to be interrupted when Phil 2.0 collapses on the floor, clutching his side with some sort of apparent injury (maybe appendix burst?) and throwing the fragile peace the people of the condo had briefly found into chaos.

“Secret Santa” ends in a strange place: Phil 2.0 grimacing on the ground, Melissa on one knee proposing to Todd… and Mike Miller accidentally shooting himself out into space in a particularly depressing moment. So far, Mike’s story this season has felt as isolated from The Last Man on EarthÂ as it appears physically. Mike’s community is dying around him as his brother’s thrives, butÂ The Last Man on EarthÂ isn’t finding a lot of meaningful connection between the two (though the thematic unity of one life given, one life taken away is reflected neatly with his worms, and the Phil 2.0/Erica situation, should Phil 2.0’s situation turn dire). Mike’s floating around on his own, tangentially connected to the people on Earth by relation only, and ifÂ Last ManÂ want his segments to do anything but ruin the momentum of it’s gravity-afflicted material, it needs to feel like his story is working towards some end. The death of his final worm (or so he thinks) is hopefully an avenue into that, however: if anything,Â Last ManÂ has proven the men of the Miller family are at their most interesting when they’re at their most desperate, so it’ll be interesting to see where they actually take this story across the next nine episodes, if anywhere.

As the halfway point of theÂ season, it’s no surprise that it feels likeÂ The Last Man on EarthÂ is looking backwards as it moves forward, introducing more nuance into the various relationships on the show while it catalyzes larger plot moments to push the show into its next act. “Secret Santa” is a half hour that neatly reflects the growth of Last Man on EarthÂ since the beginning of Season 2, a ‘holiday’ episode that takes the conventional, sentimental values of the holidays, and re-purposes them into a wonderfully uncomfortable installment.