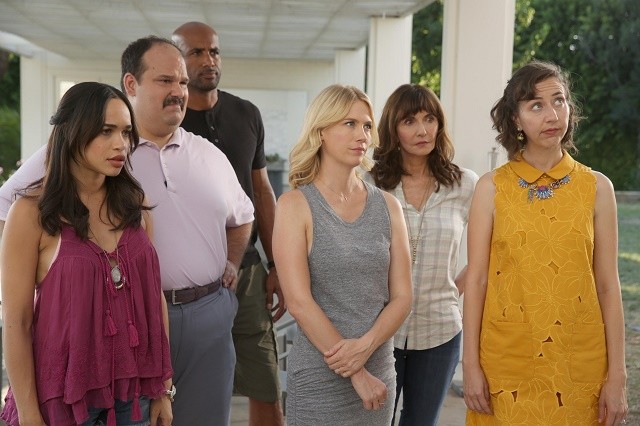 The first two episodes of The Last Man On EarthÂ Season 2Â successfully rebooted Phil and his relationship with Carol. The last two episodes, unfortunately, have not done the same for the rest of the Tucson crew, who come back in full force in “C to the T,” a half hour of television that leans so hard into the cringe elements of its humor that it undermines the ultimate point the story’s trying to make about Phil’s redemption. After all, Phil’s redemption means nothing if we’re spending another season with the cardboard cutouts of Melissa, Todd, Phil 2.0, Gail, and Erica, and with “C to the T,”Â Last Man on EarthÂ proves exactly why that won’t work.

“C to the T” is basically just 22 minutes of people being awful to Phil, presenting further evidence to the theoryÂ Last Man on EarthÂ is best when its just focused on Phil and Carol. Sure, the reason these characters are ruined is because of how unforgivably Phil treated them last season; however, their inability to show empathy for Phil at any point (save for letting him take off his collars after he saves their house from burning down), combined with the cruel ways Melissa and Phil 2.0 go out of their way to torture Phil, makes “C to the T” a slog to get through. As committed as Will Forte is to Phil’s obnoxious ways (which the show is now trying to paint as an endearing quality), his performance sticks out like a sore thumb against the lifelessÂ deliveriesÂ January Jones, Cleopatra Coleman, and Boris KodjoeÂ give their characters.

The biggest problem is Jones’ Melissa, who has grated against the others from the beginning and just doesn’t work on this show. Her monotone nature, standoffish personality, and tendency to casually be the cruelest person in any given room make her such an unlikable character, combining with her lack of comedic energy that really undercuts the episode’s few enjoyable moments, like Carol eating cheese or Phil’s attempts to negotiate with the group through charades (she just keeps yelling out “ugly!” over and over and over… and over and over).

This single-minded approach to Melissa’s character applies to others as well. Can anyone even describe what kind of person Erica is at this point? At least Gail (dumb jerk) and Phil 2.0 (completely insane) have a single character trait to attach themselves to; Erica’s literally nothing but her accent, which is the only joke she’s experienced in the two episodes she’s been featured in this season (and I’m guessing, but probably most of last season, along with “look how pretty she is!”). Todd and Carol are the only members of the group with any kind of nuance, and even that isn’t really a good grouping. Todd is just “angry overweight guy” right now (with some kind of strange secret, a subplot I couldn’t care less about), and Carol is the show’s richest, most developed persona, hardly a fair comparison.

I understand the idea is for “C to the T” to be unpleasant and draw its comedy from that, but its unpleasantness is empty, one that comes without satire or reflection. It’s just people being cruel to Phil as some kind of ‘punishment’ for what he’s done to them over the past year. A little context about who these people are, and whether they’re struggling with their decisions to become such inhumane monsters, would go a long way to giving some background (and pathos) to the jokes “C to the T” hangs its hat on. There are crumblings of a good story in the Phil Miller redemption arc, but the contrast between his evolution and their de-evolution is head-shakingly unfunny, and not in a way that feels deliberately challenging to the viewer. It makes me wish Phil (Original Phil, of course) and Carol would just hit the road again; the longer they hang out on the coast, the less and less patience I have for the one-dimensionalÂ pile of jerks the Tucson crew has become in the post-Gordon world they find themselves living in.