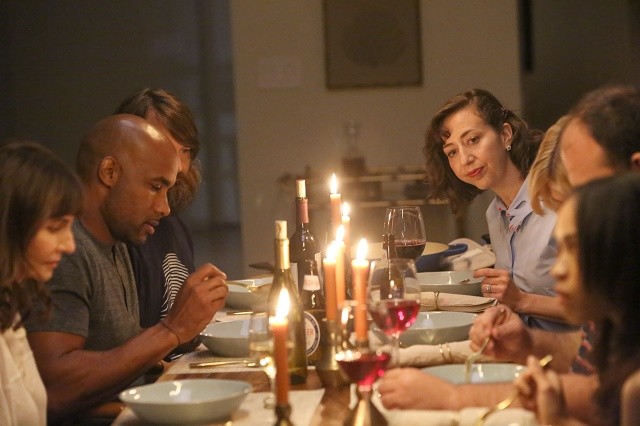 Nothing brings the family back together like cricket casserole, amirite? “Crickets” is the first time we’ve seen the Tucson crew together on The Last Man on Earth in their “natural” form, with nobody in lock-up, and everyone’s general annoyance with Phil Miller at a tolerable level. In other words, it seems like prime opportunity for the show to return to the latter (and lesser) episodes of Season 1, and yet, within “Crickets” lies potential for The Last Man on Earth to grow, in how it depicts Phil – and more importantly, how it defines the relationships of other characters on the show.

For what feels like the first time ever, “Crickets” is an episode with distinct individual stories, not all of which circulate around Phil Miller. This alone gives a fresh vibe to The Last Man on Earth, offering a look into unexplored relationship dynamics. Even more surprising is how satisfying these little stories are; despite their simplicity, they establish rhythms between characters that enrich the few scenes of the episode the main cast spend together eating meals, or hanging out in the living room.

Pairing Melissa and Gail might not be the avenue for wild, hilarious comedy, but their interplay in this episode is a bit of a treat, finally giving Mary Steenburgen some room to perform, and January Jones to inject some semblance of personality into Melissa, arguably the single most boring character on television (as Carol so astutely notes about her clothes; “This shirt needs a pineapple!”). When Melissa cuts her finger, a drunk Gail slowly convinces Melissa to allow her to do stitches on her; the story couldn’t be any more straightforward, but the sheer fact it allows the two characters to drink together provides the basis for some kind of interesting, energetic interaction, the kind Melissa’s cardboard personality has direly lacked. Again, the shades they’re painted in are broad, but they’re important: they not only allow the performer to explore the character a little more, but also automatically lessen the show’s need to orbit around Phil and his issues at every single turn.

Phil’s still got a story, of course – and again, it’s simple, but essential. Todd was Phil’s only friend in Tucson early on, and allowing Phil to repair one of the many bridges he burned offers New Phil his first small victory as an empathetic human being. While it’s still a little disconcerting the story was about the fat man who stole the bacon (a fact it openly acknowledges), how it reunites the two characters is more than a little charming, allowing Last Man on Earth to indulge its cringe-y aspects with some kind of purpose beyond the laughs the scene offers in context.

Unfortunately, Carol gets the short end of the stick, having to ingratiate herself into the relationship of Phil 2.0 and Erica – who I honestly forgot were dating, save for the moments Last Man on Earth explicitly looks directly at Erica’s frustrated face. This story, while it allows Carol to be her awesome self and help Erica express her feelings, is the emptiest of the three. Phil 2.0 is basically a sociopath, and “Crickets” doesn’t offer Erica anything to actually develop her character around the idea of her frustration with her supposed “boyfriend.” Instead, the conflict is about the unappealing shade of Phil 2.0 we’re offered this week, which transforms him into a wimpy, passive romantic fawning over every little thing Carol does (advances she doesn’t find charming in the slightest).

The Last Man on Earth‘s first foray back into cul de sac life isn’t perfect, but it’s not discouraging, either. The elements of character and comedy are starting to blend together a little better, if only because the show’s offering us the opportunity to see characters experiencing conflicts isolated completely from Phil (well, mostly – he’s still the main character, after all). “Crickets” may not necessarily be a blueprint for future Last Man episodes, but it could represent the series trending towards the more engaging (and rewarding) show it teased at times last season, when Phil wasn’t trying to sleep with everyone. Rare moments they were, but Season of Last Man on Earth suggests these small moments may not have been forgotten.