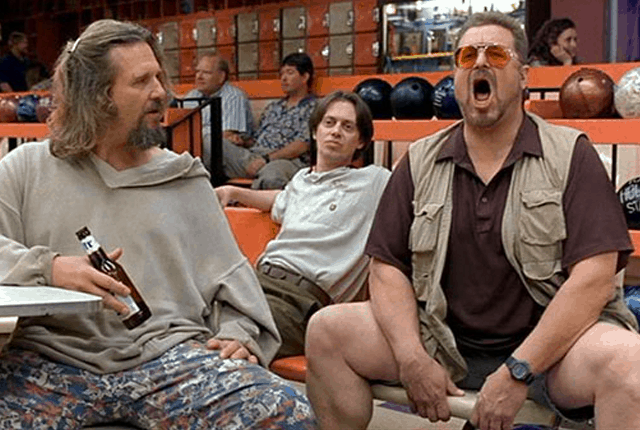 If you ever needed a reason to like Jeff Bridges any more than you do now, look no further than John Goodman’s walk of fame ceremony on Hollywood Boulevard.  As many of you already know the two will forever be immortalized for their roles in The Big Lebowski.  In what has to be considered The Coen Brothers best movie, Bridges’ Jeff Lebowski and Goodman’s Walter Sobchak will always go down as being one of the best movie duos of all-time.  So what better a way to pay tribute to his good friend on the walk of fame then by reviving the very character that Sobchak loved so dearly?  According to Variety:

Jeffrey “The Dude” Lebowski was brought back to life on Hollywood Boulevard, but this time, he was the one who delivered a eulogy for a friend, and it ended with “Good afternoon, sweet prince,” rather than good night.

At John Goodman’s Walk of Fame ceremony, Jeff Bridges donned “The Dude’s” signature, quirky, knit sweater and delivered a typically rambling and hilarious rendition of the eulogy which Walter reads over Donny’s grave in the 1998 Coen Brothers cult classic “The Big Lebowski.”

“He’s a good actor, he’s a good man, John Goodman,” Bridges began. “He’s one of us, he loves the outdoors and acting. As a showman, he has explored the stages from Los Angeles to New York – we’re talking Broadway here, man – he’s done some weird little movies, too. And he’s lived, like so many men in prior generations have lived their lives; he is a man of his times, a man of our times, and he has become a legend.”

Apparently John Goodman was laughing the entire time in the background which is exactly how this thing should have gone down.  Well played Mr. Bridges