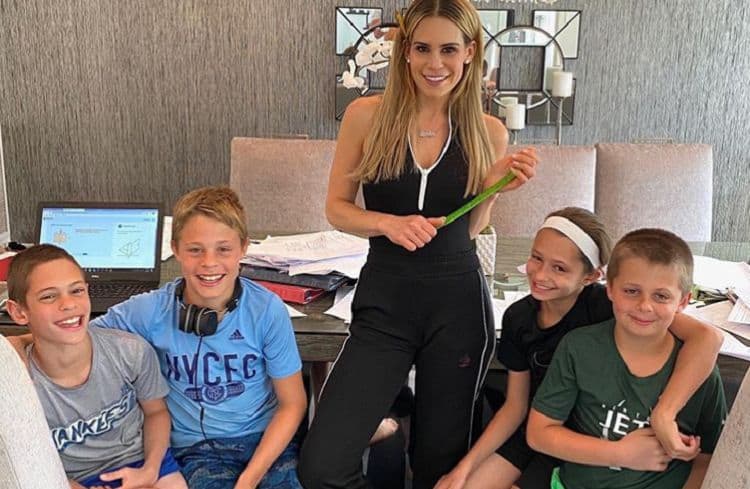 The women of ‘The Real Housewives of New Jersey’ seem to have garnered much attention with their gossipy ways, bickering, and drama. The reality show on Bravo television has many fans, thanks to the stars that keep them coming back. Jackie Goldschneider, wife of Evan Goldschneider, was an attorney and writer before joining RHONJ, and she currently spends her time raising two sets of twins (ages 11 and 9), and writing articles on parenthood for various websites and her blog.

Though she didn’t join ‘Real Housewives’ until its ninth season, it seems that Jackie fits in quite well. She claims that she loves the ‘process of getting famous’, and she plans to continue on the path she’s on. Since motherhood is apparently her top priority, we would guess that the only thing that could take her off the program would be her children. It’s obvious that she feels just as comfortable on the show as she is tooling around in her minivan with her kids. These points made us want to get to know her a bit better and share the information with you.

Below we have provided you, our curious readers, with a list of ten things you don’t know about Jackie Goldschneider. From her personal life to facts regarding her professional conquests, this list will fill you in. Whether you’re aware of her television presence or not, you will be after today. So read on to learn more about a ‘Real Housewife’!

Here are 10 Things You Didn’t Know About Jackie Goldschneider

While we know that she is currently one of the stars of RHONJ, what we didn’t know is that she was a longtime fan of the hit series. She claims that during her years of viewing she had no idea that she would one day be on it, nor did she aspire to be. But when the chance came up she jumped on it, claiming that she never says no to anything. Well, it’s a good thing that she’s a ‘yes’ girl, because at this point they wouldn’t want to go forward without her.

According to northjersey.com, Jackie adores the attention that goes hand-in-hand with being famous. She states that she gets the most attention from fans that she meets at the airport, for some reason. The best part is that she encourages fans to approach her, as she is eager to not only meet them, but also to relish that adoration that she so loves.

Jackie was born on October 2, 1976, which makes her a Libra. Libra women are said to be among the friendliest and most charming of the zodiac signs. They are also said to be highly intelligent, elegant, and truly embracive of their femininity. We would guess by looking at Jackie that she is all female, and definitely embraces her feminine side. As for intelligence, we think hers speaks for itself through the fact that she writes and shares her knowledge with others.

4. When It Comes To Her Kids, She’s A Worrier

As we stated previously, Jackie’s kids are her priority. She sees to it they have the best upbringing, and she keeps on top of all the latest information regarding child-rearing. But she is a worrier, and one of her greatest concerns is seeing to it that her children grow up independent and strong after living in a home that has provided so well for them. She has various methods of teaching them self-sufficiency, which she shares with other parents in her blog and on other sites.

There is no putting a price on the privacy of her and her family. While she is new on the show this season, and things do change over time, she has done a great job keeping her private life under wraps. That includes things like the names of children and family members, details about her childhood, and her net worth. Over time she may come to relax a bit, but for now, Jackie is very content keeping her private business private.

6. She Is Active On Social Media

When it comes to self-marketing by means of social media, Jackie is something of a pro; we can likely attribute that fact to her being a freelance writer. With that being said, she currently has active accounts on Instagram and Twitter that have proven priceless when it comes to making herself known. Her Instagram is @jackiegoldschneider, and she has gained between 3k and 4k followers since joining the show. Also, she has posted approximately a thousand times since the 7th of October! She can be found on Twitter under @JGSchneider; there she makes more than a hundred posts per day and is followed by more than 1k.

7. Advice Is Her Forte

As the fact that she writes about parenting can attest to, it is said that Jackie loves to give advice. The question is, how well will that go over with the other women on the show? The truth of the matter is that every ‘Housewives’ spinoff ever made, and that includes the original, has been made up of women who think they know everything. As a newbie on the program, will the veteran housewives be receptive to her desire to help? We can only watch and find out.

8. She Is Good Friends With Another Housewife

Like Dolores Cantania, who is good friends with the departing Siggy Flicker, Jackie has a pre-existing relationship with another RHONJ cast member. She and Margaret Josephs have been friends for sometime, says Romper, so that should make her welcome a bit easier. But will it make her a shoe-in with the rest of the group? Only time will tell.

9. Do We Know ANYTHING About Her?

Other than what she WANTS us to know, the answer is slim to nothing. One thing we can tell you is that her surname, prior to marrying husband Evan, was Mark. We also know, thanks to 2paragraphs.com, that Evan is a financier and partner at Hawthorne Lane Capital Group out of New York City. You are just going to have to be satisfied with that for now.

Finally, we come to something we can dig up. It turns out that the former attorney-turned-writer does freelance work for many sites, including ‘Scary Mommy’. Along with that, she does indeed write for her own website, The Mommy Brain, which focuses on a variety of parenting topics and leaves the door wide open for Jackie to give as much advice as her little heart desires. Writing manages to keep her very busy when she is not focusing on her children or the show.

Well, for a newcomer, we sure have learned quite a bit about Jackie, especially when we consider the fact that she has kept so much about herself under wraps. We can respect that, as I’m sure we would want it the same way if we were in her shoes. We wish her the best of luck on the show, and we hope she gains just as much fame and fan popularity as she hopes for. We’re out for now, but we’ll be keeping our eyes open for new Jackie Goldschneider info to update you with!