Home
Television
If Maria Hill Is Returning For Secret Invasion, Then What About Coulson? 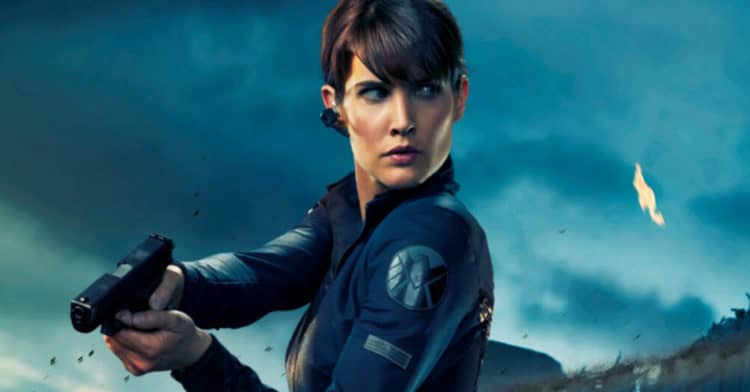 It looks like Cobie Smulders will be returning to reprise her role as Agent Maria Hill for the upcoming Secret Invasion series. That just makes all the more sense, since she is Nick Fury’s right-hand woman. It will also be nice to see the real Maria Hill return to the Marvel Cinematic Universe. I guess you can say she was in Spider-Man: Far From Home, but she later turned out to be a Skrull. Oh, but don’t worry, it was Talos’ wife, who is one of the friendly Skrulls. I’m sure we’ll see the two of them around in the Secret Invasion show, but I’m excited to see Fury’s second-in-command come back. But I have to ask about another particular S.H.I.E.L.D agent who was once close to Nick Fury. If you only watch the movies, then the last time you saw him was in the Avengers. Yes, I am talking about Agent Phil Coulson. Other than Maria Hill, Coulson was the next most notable S.H.I.E.L.D agent who served as a liaison for Nick Fury. He was responsible for introducing Tony Stark to S.H.I.E.L.D and making first contact with Thor when he arrived on Earth. He also had a good working relationship with then-fellow S.H.I.E.L.D agent Natasha Romanoff, or the Black Widow. What’s even cooler about Coulson is that he was created just for the MCU and didn’t originate from the comics. This made it feel more like its own thing and had different kinds of characters to offer.

So, with that in mind, it was kind of heartbreaking to see Agent Phil Coulson killed off by Loki towards the climax of The Avengers. His death meant a lot for the team, as it gave them the push to band together and save New York and the world from Loki’s invasion. Now his death would have had more impact, except Marvel decided to resurrect him for the Agents of S.H.I.E.L.D show. I have to be honest, I watched a few episodes of that series and just stopped watching it. I didn’t really think it was bad, but it didn’t grab me like the movies did. That’s probably because Kevin Feige wasn’t involved in it, but it did add on some notable stars like Bill Paxton. It’s biggest draw was the presence of Phil Coulson, except it did pose a problem. With Phil Coulson being alive once again in the MCU, it’s a bit odd that he hasn’t contacted his old colleagues, isn’t it? Not once has he reached out to Nick Fury, Maria Hill, or any of the Avengers to let them know that he’s not dead anymore. A little strange, but that’s because the movies didn’t really acknowledge what was going on in the shows. Oh, but the shows did try to keep up with the timeline that the movies set up. It’s a tricky situation, but I think if it doesn’t happen in the movies or the Disney+ shows, then maybe we shouldn’t consider it canon. That probably does include the resurrection of Agent Phil Coulson.

If that’s the case, then we might just have to settle with Nick Fury and Maria Hill to carry on the legacy of Phil Coulson. On top of that, they’re still probably trying to rebuild S.H.I.E.L.D from the ground up after the events of Captain America: The Winter Soldier. I like that idea, even without the presence of Coulson. I’ve said this for years, but I still think him staying dead was far more impactful for the climax of the Avengers. But if Maria Hill is returning, I have a feeling that fans will keep talking about the possible return of Coulson. And by that, I certainly mean have him return to the movies. Now I haven’t kept up with Agents of S.H.I.E.L.D, but I think a final scene with Coulson should hint at him trying to meet Maria Hill or Nick Fury. Like I said, I stopped watching it, because it’s not really considered canon. That means Marvel is either planning to bring him back and ignore what happened in Agents of S.H.I.E.L.D or they’ll keep him dead.

If he were to return, then where would be the best place? Should he join Maria Hill and Nick Fury in Secret Invasion? I don’t think so, because there really isn’t a place for him in it. On top of that, I believe Maria Hill now has a chance to really grow as a character. In the past, she was often just the supporting character, but when she was doing something, she was really cool. From her eagle eye marksmanship, to her ability to hide in plain sight, she fits the bill for a super spy. That’s probably why she became Nick Fury’s right-hand woman, but the comic version is even cooler. In fact, the Maria Hill I know from the comics is known to be quite a B-word. One of my favorite Marvel storylines with her in it was the Civil War series. When Nick Fury was missing, Maria Hill took over as the Director of S.H.I.E.L.D and as a firm believer in the Superhuman Registration Act, she spearheaded the hunt for anti-registration heroes. To put it short, she was a far cry from the Maria Hill in the MCU. The one in the comics had a no-nonsense attitude and a ruthless approach to apprehending the rogue heroes.

We haven’t seen this Maria Hill in the MCU just yet. I think it would be very cool to see her act as the acting Director of the newly established S.H.I.E.L.D in Fury’s absence. We’ve seen her be the super spy and now she has the opportunity to be a leader. She’s certainly capable being a great leader for a new S.H.I.E.L.D and has worked with the original Avengers. If Coulson were to make his return, then he would just be doing what he was already doing before. His presence isn’t really necessary and I say bring on more of Maria Hill. What are your thoughts, Marvel fans?