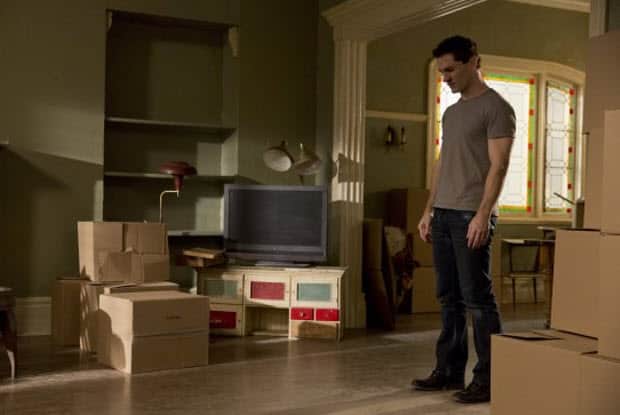 In the second to last episode of Being Human the roommates saw a lot of action. The series has a trademark pacing and tone that it’s played with all season. House Hunting was perhaps its biggest shift, but in the best of ways. The episode begins with Aidan trying to talk Kenny into leaving Boston. It’s like watching a ticking time bomb though because we know that Kenny knows. So while Aidan tries to console him about his dead girlfriend, we’re mostly just wondering when the young vampire is going to snap.

When Aidan arrives back at the house, Ramona has joined the moving party. Or she’s trying to. She’s beginning to give everyone weird vibes, but that aside they really can’t stay. To ease Sally’s mind, Aidan promises to help the young ghost get closure. However, when Sally goes to tell Ramona about the plan she’s not there anymore. It’s weird, but everyone takes it as a cue to pack it up, and so they break off to grab their things.

When we see everyone as a group again, they’re deciding how to divvy up their belongings. Even as we watch them pack up the life they all built together there’s a positive aura. Their relationship isn’t over, just… different. Despite the reality that this is the one of the last times we’ll ever see them in this house together, it’s not all sad. Everyone has to move on, right? Apparently Ramona agrees with this sentiment.

In a matter of minutes she goes from a lonely child ghost to a clingy, obsessive roommate. She needs them, they can’t leave her. As we later learn, it’s not because she won’t have anyone to talk to. It’s because she won’t have anyone to kill for her. That’s right. Ramona is not a ghost, but the evil of the house manifested. And she enjoys the roommates company not because they’re likeable people, but because of their bloody tendencies. How… lovely.

Before we discover that nifty fact, Ramona manages to kill her sister, separate the roommates and put them all on nightmare torture rides where they face their worst fears. And for some, the heart of their guilt. We see old faces return once again and just like the rest of the season it’s wonderful until it’s not. Julia, Emily, Kat, and Henry make appearances and they’re here to help each roommate work through their “issues.” Even if that means they all have to die.

Aidan can’t possibly want to continue on his life of slip ups and small redemption arcs. Nora can’t want to live in fear of what Josh might do, especially now that she’s pregnant. Sally might have everything going for her with Aidan, except can he really love her if he can’t even touch her? And Josh has to face how dangerous he is. Should he be allowed live amongst the living if he can’t control himself? Is it safe for him to be with Nora?

In a series of scenes we watch Ramona pick at the heart and minds of all four roommates. Their slow unravel and near deaths are stopped only after Sally proves again that she’s the strongest of them all. Our favorite ghost calls Ramona out on her mind games and breaks free of her trap. She finds Nora, then pulls her from her emotional hell. The girls then go off to help their respective men not kill themselves. The ghost/demon/evil house spirit doesn’t seem too phased by this. The roommates may have been strong enough to break through the mind warps, but Ramona can control the house. There are no exits. They aren’t leaving.

And just when we think it can’t get any worse or even that the bond between them might help them get out unscathed, Kenny shows up to exact his revenge. As Aidan faces his son most of us are probably repeating to ourselves “The father never kills the son.” Aidan is trying to reassure Kenny and set him onto a path for a new, healthier life. Except for the fact that he’s a vampire and as we’ve seen over four years it’s really hard to be both emotionally healthy and a member of the undead.

We hold our breath as the two vampires duke it out, ending with Aidan being the survivor once again. In Kenny’s final moments though he manages to get a dig in with the emotionally wrecked daddy vamp, compelling Aidan to believe that Sally is gone. Who’s fault is it that Sally’s gone? Well, that would be Josh.  Now you can scream because that moment we saw right before Sally returned to the present in “Too Far, Fast Forward”? It’s upon us and it’s the last thing we see before the screen goes black.

This episode was set up for what looks to be a rather action-packed, emotional and downright phenomenal finale. What we uncovered about Ramona and the house was quite unsettling. Being Human does horror, but this had a different spin. Nevertheless it led to some exciting, if not nail biting events. Perhaps the one thing that felt off was who Sally met in her room of personal hells.  It could be because we’ve only had half a season with Sally and Aidan, but someone like Robbie — who could remind Sally of her personal failures to “save” all the people that she loves — might have felt like a better fit. With that said, and with the way things have turned for “Saidan,” Kat being the one to meet her still worked.

The show’s friendship and romantic relationships came solidly together after a rough season this week. We see Josh and Nora chip away at the space that’s grown between them and we’re so totally relieved when they decide to work things out. Josh is now somewhat in control of his wolf and Nora can feel safe around him. As we find out later, their baby can also feel safe around him (what?!). Meanwhile, Sally and Aidan are struggling with moving on by themselves. Except maybe not. Aidan puts on his “be cool” show, sharing that he plans to move to Pete’s trailer where he can’t hurt people. That’s before they establish he’s an idiot and he asks Sally to “haunt him” there. (Adorbs!)

Seeing some of the series most important characters come back and systemically work at the psyches of our roommates was a thrill ride. A painful, but thrilling ride. Playing with the concept of working afterlives for each type of monster was a nice touch as well. It raised a few questions, but didn’t leave the answers hanging. Kenny’s death was a heart breaker for sure, while Ramona was a deliciously evil surprise. What she’ll do next week — what Sally may have to do for her roommates — is stress inducing. The episode didn’t end on a positive note, but the energy is high going into the series finale.

What are you looking forward to in Being Human‘s final episode? Is there an ending you want to see? Don’t want to see? Are you ready to say goodbye to these loveable monsters forever? Let us know in the comments.