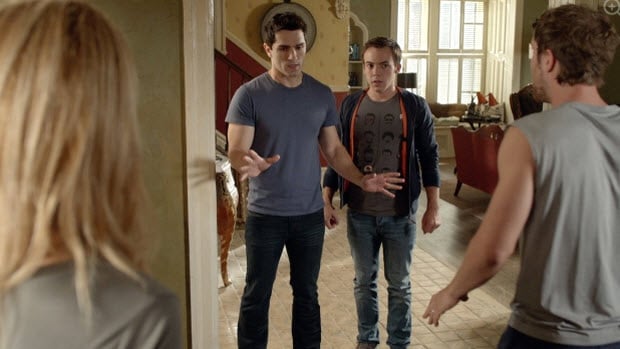 This week’s episode of Being Human, “Panic Womb,” was chock full of exploring what has and has not changed about our Boston roommates over the series. Oh, and there were were-babies.

It would seem that the new wolf is altering Josh’s very core. His first in episode appearance has him doing hanging sit-ups and trying to organize his life through a to-do list that he can’t even find. To top it off, the last item on the list is a pumpkin doodle he swears up and down means something. If only he can remember. All of this is so not Josh that it warrants more than the side glance Sally gives Nora as he excites their bedroom.

As we see, the sit ups were only the tip of the iceberg. Josh has plans to do a 10 mile run, but is temporarily interrupted when Aidan shows up in the kitchen with Kenny. Awkward. We see a new side of Josh, but Aidan fires back with a “There has to be room for human (even though we are not) error, you know like that time you purposely left your cage open and almost killed us all because you wanted me to kill you.” This hits Josh, but he does not back down. In fact, it’s Nora stepping in – to agree with Aidan – that forces Josh to re-calibrate.

Nora offers a gentle reminder about how she was turned and how they all do the mistakes thing, but it’s really this raw moment between Aidan and Josh that has the most impact. The two “bros” of the house are throwing shots at each other and staunchly standing by their positions. It was quite a scene. Nora makes a solid point though, while cleverly illustrating the show’s algorithm. The “exception,” the “choice” and the “ultimatum” have been at the center of each characters major arc since season 1. So you could say the chickens have come home to roost for Josh, and later for Aidan and Sally. Before that happens though, Josh meets up with with a pregnant werewolf.

Yes, the storyline has finally come back. Were-babies. We have all been wondering since Nora’s miscarriage if she could have another baby and the issues it might raise. The episode showed us that it is actually possible to conceive and successfully have children as werewolves. While on his jog, Josh meets a woman who is pregnant and in a wolfy relationship with her husband. Josh uncharacteristically decides to get involved, offering to run some tests at the hospital.

This leads to them coming to the apartment to have the baby. The ordeal is traumatic (not “poop while you push” levels so that’s good), but we see what an actual were-baby would look like. It comes out wolfy, but mother’s milk helps it take on human form. This storyline is obviously alluding to the prospect of Nora and Josh babies, but the million dollar question is: will the drama their fellow monsters bring upset their happy family dreams?

One thing this episode made really clear, in case you missed it over the last three seasons, is that Aidan is like the Bermuda triangle of love. Bishop, Rebecca, Suren, Henry, Kenny, and now Kat have all been lured by Aidan’s siren call. It feels like an appropriate time to note that Celine was the only one who got away… and lived. Everyone else has either died at his hands, or existed as vampires who eventually died. Suzanna calls Aidan on this as he’s helping her flee, after he’s outed her as the vampire slayer to his son.

Aidan admits she is right, so when he shows up at Kat’s apartment later (fresh from sorta having a heart to heart with Sally about it), we think it’s to break things off. Instead, we see Aidan confess that he’s a vampire followed by Kat laughing in his face. Besides her response being the funniest part of “Panic Womb,” this honesty kick Aidan is on is totally refreshing. It’s not full truths though (he carefully left out that Kenny is compelling the heck outta everybody), so we’re bound to see some of this stuff manifest later. Still, this legitimately “wiser Aidan” should prove to create fresh plot twists and ultimately less emotionally angsty character development.

As all of this is happening, Sally goes back to the hospital to talk to her old sorta kinda friend, Zoe. Typical of their interactions the ghost whisperer is standoffish, particularly when Sally says things are really bad. Sally wears her down though and she agrees to help, but it comes at a price that Sally pays for with a reality check. She and Zoe do some digging to find where the family of “Lil’ Smokie” ghost girl moved and are then on the move.

What they discover is Beatrice, the presumed but actually not so dead girl Sally believed was sacrificed in the apartment. Pretending to be a member of a local historical society, Zoe craftily navigates her conversation with Beatrice to eek out some information. Zoe taps out though when Beatrice states having her bike stolen was the worst thing she experienced as a child. Lucky her.

As we later learn, this was enough to convince Zoe there was not a problem – and remove herself from Sally’s dangerous meddling. Of course, all Sally has ever wanted to do is help people, but like Aidan and Josh, her desires have often led to dire consequences. Zoe forces Sally to face the music, but maybe this time there’s really something to be said for the ghosts nosiness. Beatrice may still be alive, but the girl Sally saw during her time traveling and at Beatrice’s home is clearly not.

Everyone but Sally exhibited behavioral shifts this episode, although she partook in some necessary self reflection. The scenes that were most enjoyable were Nora and Aidan working on his “identity” box, Sally and Aidan discussing her tendency to get involved, and Nora and Josh’s discussion of were-babies. It’s really these moments between our characters that have the most consistent pay off and sort of highlight the sentimentality we all watch this show for.

Ultimately, “Panic Womb” and the previous three episodes have expertly addressed longstanding character issues. This indicates the series intends to make Season 4 not just the year of the wolf, but the season of “the seasons.” Good. It’s been quite a fun journey so far that’s only bound to get better.