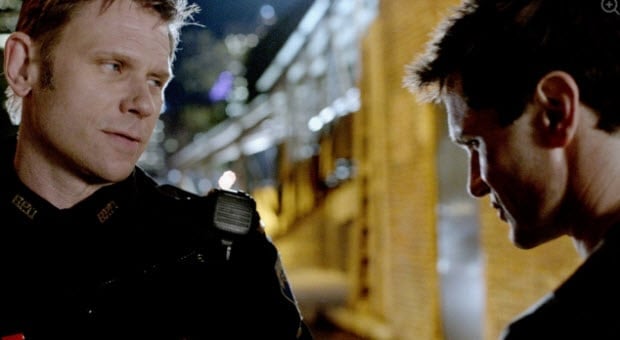 Being Human really knows how to take what you love, turn it on its head, and then use it against you, huh? This isn’t a new narrative approach for the series by a long shot, but “Too Far, Fast Forward” definitely perfected it. The follow up to one of Being Human‘s wildest narrative turns wasted no time addressing the fallout of Sally’s death.

Still reeling from the reality that the love of his life is now in her own (undoored) afterlife, Aidan collapses into the arms of his father, Bishop (guest star Mark Pellegrino). His decision to go back results in one of the most painful moments of the show ever, though with the way things are going it’s sure to be outdone in about a week or so. Aidan isn’t just hurt. He’s consumed by his anger and Bishop prays upon that to bring his son back home.

Ray and Josh are tracked down by the father-son duo and Sally hangs on to the idea that there’s still some goodness in the man she loves. For a flicker of a moment we believe her. Then the spiral begins. Aidan doesn’t end Josh, but does something just as foul. Killing Ray with his bare hands, he makes both his friends watch as the monster takes over. Sally calls him just that before we watch Aidan mock his roommate, declaring that his “self-hate” and guilt is enough payback, and then pointing out that he’s taken away his one chance at being human. Josh is dangling off a cliff by his fingertips and Aidan’s up there stomping on them.

Things go from bad to the absolute worst for Aidan after this. For Josh life levels off a bit more with Sally at his side. Last week the story spent quite a bit of time focusing in on the hyperspeed development of Aidan and Sally’s romantic relationship. This week Sally gets her co-dependent on with Josh while the prodigal son returns with a massive bite. A year passess and Josh has moved out of Boston living life as Ned the Piemaker 2.0.

The relationship dynamics between Josh and Sally are substantially different than those between her and Aidan. It was nice to see the two share significant screentime together especially on the heels of last week’s events. At one point Josh even says that Sally is his only friend. That Josh is able to forgive speaks volumes about what remains the same in a person, despite their life developing under very different circumstances. With their time together you also see how their balance, both in this au and the original universe, helped them both along.

As for Aidan, the vampires are living through the virus we saw in Season 3 and Bishop is profiting off of the dwindling clean blood supply. Under Bishop’s regime, Aidan’s new lovely pastimes include: stealing entire body bags of blood from the hospital, manipulating Nora into helping him, moonlighting as a (stolen) blood dealer, and taking Josh’s blood to cure himself so he can then kill his maker. In one of the most uncomfortable scenes of the episode, we watch Aidan dance around Nora at the hospital like a predator sizing up their prey before he throws her against the wall to “encourage” her to not threaten Boston’s vampire king.

What we basically see from Aidan this episode is how truly horrible he can be — with the help of his father — and it doesn’t seem to let up until a familiar face is brought into the mix. After Sally possesses Josh, he ends up stuck with her other life memories. Where before he never believed Sally, he now has visual proof that he’s with Nora in the other universe. This is apparently all he needs to get him on board with slinging Sally back.

Aidan’s turning point, however, comes as he crouches on the side of Bishop’s deathbed. He’s poisoned Bishop and the dying vampire points out that all Aidan’s really done is become “the perfect son.” Aidan does quite a bit of cringe-worthy stuff this week, but this scene solidified just how monstrous he had become. Aidan is now suddenly ready to try for whatever other future he has, on one condition. When Sally goes back to their original future she has to make him remember their love. It’s a truly touching scene between them that leaves us feeling even more hopeful about her return.

“Too Far, Fast Forward” didn’t feel like the bullet pacing of “Rewind, Rewind,” but it was certainly as affecting. Whether it was watching Nora’s life completely fall apart, loveless and filled with addiction, or watching Aidan be the foulest we’ve ever seen, the stakes were still there. Particularly in one f the episode’s final moments where we see Sally traveling through time and “overshooting” as Donna put it. In what only felt like a minute, we watch as Josh tries to calm Aidan before Aidan snaps his neck. What?

The show has spent two very intense episodes building up and breaking down a world, giving each character a different path. You could argue that while the trio fell apart, each at least carved out a tiny bit of “okayness” for a while. Viewers, however, were left feeling like going back was the right decision. This AU was the “ultimate” mistake. Except maybe it wasn’t. Maybe after you reset the past after changing it, things still… linger. Maybe we should be careful what we wish for.