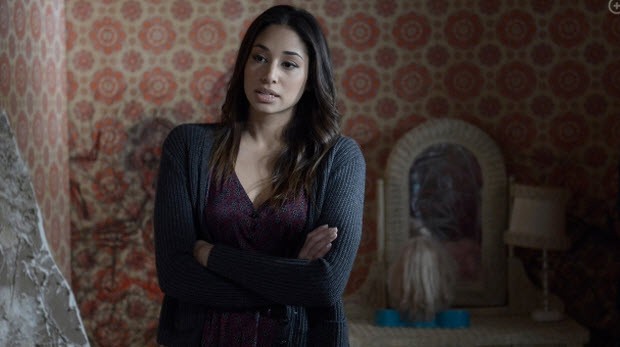 If each Being Human episode had its own nickname, this week’s “Ramona and the Pest” would definitely be “The Game Changer.” The show is always throwing in a curveball (or two) at its viewers, but what this week offered up — especially in its final moments — probably made your head and heart spin.

For the first time in the series we meet Sally’s father. He arrives with news that the house has been sold, telling the roommates that they have until the end of the week to turn in their keys and be completely out. It felt safe to assume that this storyline died with Robbie, but it seems that the show’s shelf life is tightly linked to the characters presence in the house.

We also get to meet Ramona, the girl Sally saw murdered in the house way back at the start of the season. We learn that she has been trapped in that room since her death. As our roommates talk with her more they discover she has a twin, a revelation Sally latches on to. Ramona’s predicament as her cue to start working on getting her door again, but Ramona seems to have plans of her own for the housemates.

Ramona has formed an uncomfortably close relationship with them all (read: it reeks of creep), but her bond with Josh is most immediately deadly. The wolf pack shows up at the house ready to take Josh back. Using Astrid to get into the house, they take Nora, a move that not surprisingly sets her husband off. In his fight to get to her — which Ramona impedes upon by locking Josh in his bedroom — the wolf takes over, and when the pack arrives at his door we see how much damage he can really do.

The aftermath is pretty horrific and forces everyone to do their own share of heavy lifting to help Josh get control of his wolf. Sally perhaps does the most significant work. Avoiding magic, she possesses Josh and joins him in his full moon headspace. There we see that since doing her spell he’s been trapped in wintry forest, running and hiding constantly from the wolf. Magic or no magic, it’s what Josh has been doing from the very start and Sally forces him to face this fact. If he doesn’t, the wolf will win out.

Meaghan Rath and Sam Huntington’s performances within these scenes were solid standouts of the episode, calling on the emotional pull of each character’s narrative trajectory over the course of four seasons. Blatant honesty has been at the core of Sally and Josh’s bond more so than some of the series’ other relationships. Coupled with her own reaper experience, it was fitting that she’d be the one to help him finally deal with his monster predicament.

There was another moment in “Ramona and the Pest” though that shine dramatically both in terms of acting and character development. Kenny makes a moving declaration about his love for Astrid and for a moment he’s not Bishop, Jr. Aidan feels compelled to help him runaway with her and Nora shares his sentiments. Josh on the other hand feels like she’s safer with her pack. Aidan and Josh’s disagreement puts them into a stand off and we begin to feel like that jump to the future that Sally saw is a real possibility.

The thing about this scene is that what each one of them said was true. Josh has every right to fear for Astrid’s safety around vampires. His experiences — including what he’s seen from Aidan over the years — would lend one to be weary of getting into a relationship with them. Aidan is also right in that (particularly this season) Josh has been using his wolf as an excuse for his behavior. This is a large part of why Nora left. Josh is not taking control or responsibility for his actions.

He’s also right in that their relationship started as an experiment, but as Sally notes it has become far more than that. In this moment we’re watching all three actors playing off the tension based in character flaws, but also the trio’s dynamics. The moment is electric and as a result really revealing. The greatest thing we get from this scene though is that their relationship has saved them time and time again because they might be able to lie to themselves, but they can’t lie to each other. It’s a sentiment that’s been at the heart of the show from Season 1.

While the episode saw Josh and Nora come back to each other and the trio’s spat end in seeming resolution, it also saw more relationship development for Sally and Aidan. What’s most interesting about the romantic developments between these two is that for as much screen time as we’ve seen them physically interacting, the two characters haven’t actually physically touched. Not them, not really. With only two episodes left it hardly seems like much can come from it still. The emotional aspect and closeness they share can be pretty moving though and their growing romance may end up being way more significant for the character’s ends.

While we’re talking Sally and Aidan, their DMV scene was, while certainly hilarious, a subtle reminder of the nature of the show. Sally is “human” because Aidan and Josh can see her. In the house no one questions her existence because everyone, including us, can see her. It really is a place where they can openly be themselves. Now remove the house and fellow monsters from the equation and what do you get? This scene where Aidan gets sideways looks every two seconds. It was both humorous and fascinating to watch this scene contained within the very same episode that we learn they must all move out for real this time. The show isn’t just about monsters playing pretend. It’s about the complicated and wonderful mess of being human. The house lets them do that. No house, no human.

Despite all the turmoil of the episode, things feel like they’re going to work out until the last 2 minutes of the episode when werewolf Astrid shows up to drop a truth bomb. The moment, despite how it fuels the flames of the season’s rising dramatic action (and boy does it ever), is really weird. Mostly because we’ve all been watching under the assumption that monsters like werewolves and vampires don’t get afterlives. They don’t get to be ghosts and yet here she is, standing in front of us. Or is that really her?

This week showcased nearly all of Being Human’s trademark narrative ingredients. We had (seemingly doomed?) relationships we’re desperately rooting for, tough choices complicated by conflicting allegiances, big plot twists, and monster carnage. What next week has in store is certain to be exciting, but where will it leave us? Do some new developments feel like distractions from what’s really about to happen or could the way things end up be a complete surprise for us all?