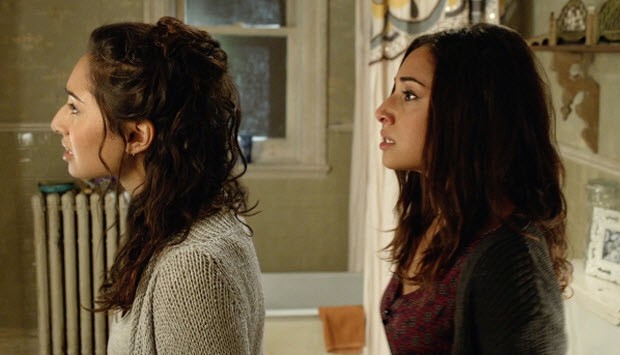 Dearly beloved we are gathered here today to talk about the latest episode of Being Human and attempt to piece together what the hell happened during this wacky re-do. “Rewind, Rewind” starts where last week ended as Sally watches what’s supposed to be her final moments. But things don’t go as planned when the ghost with the most uses a trick she picked up in 4.05 to jump her own body. This decision will alter both her and her roommates fates in ways she couldn’t imagine.

What “Rewind, Rewind” handed its viewers was more than a fun and wild alternate universe episode. First, it watched like an entire season with small arcs building to a finale-ish stand off in good old Being Human fashion. With the roller coaster nature of the series’ narrative packed into a single week’s go, it’s safe to assume you cried, yelled, cheered, or – even more likely – did all three in the 42 minute span.

Second, from beginning to finish it felt as if the writing was doing three things simultaneously. It was an ode to the characters origins and those viewers have been there from the emotional start. It was also a nod to part of the fandom’s long awaited desires. Finally, and perhaps most importantly, it reinforced the pure necessity of each triumph, failure, nature, and role these characters have embodied during the course of the show.

With Sally’s knowledge she is not just able to stop her death, but in a way orchestrate her future. In the beginning the “alternate” versions of our characters aren’t very different from the people we met back in Season 1. The changes her non-death create are significant though small. Sally acquires the house, but loses her friend Bridget to Danny’s clutches. She waits on the sidelines for Josh and Aidan to buddy up and then swoops in to stop Aidan’s hook-up with Rebecca. Her final move is offering the other halves of her whole the apartment.

However, as Sally meddles more and more she alters other’s decisions and motivations more drastically. At one point we end up with an Aidan who has fended off Bishop and fallen in love with a now werewolf-y her. We get a Josh who knows about his fate with Nora, but has fumbled the building blocks of their relationship. Both of these lead to two different character developments than our initial go around. Aidan values his life with Sally – in which he feels more human than ever before – but not with Josh. And Josh? He feels like a third wheel without support and so turns to Ray to handle his monster.

One of the coolest parts about this episode was seeing so many familiar faces. From Rebecca and Marcus to Ray and Bridget, many of the inaugural season’s biggest players were on hand to help re-set the stage. It was certainly fun to watch both Aidan and Josh come to terms with their potential lives as their naive first season selves.

What was of particular interest though was how Sally’s non-death shifted the group dynamic and thus their lives. It was as if her physical existence forced a role reversal for the two boys. It gave us a new version of Josh who never quite grew out of his monstrous insecurities. Instead of a desire to be the stable one in the house for both him and his roommates, Josh found himself without purpose and without a drive to fight for the other side of his human anchor: Nora.

The Sally and Aidan romance, while surely pleasing for  some, was more than perceived fan-service. It showed Aidan moving into a healthy relationship and life. One where he was not a victim of his weaknesses and carnage didn’t follow. Aidan could be better. To see how much their roles in the house were dependent on the nature of their relationships – and how that could be impacted by a single turn of events – put things into perspective for both Sally and us.

“Rewind, Rewind” wasn’t about “Sally-ing it up,” giving into fan desires or even – believe it or not – crushing our souls. Instead, you could argue this week’s episode was about how sometimes what we want isn’t what we need. Despite being alive, Sally couldn’t live in a world where Aidan would have given up on Josh. She couldn’t be okay with a universe where all three of them didn’t fight for each other. Apparently fate couldn’t be okay with Sally living, and so watched her die (again) from a blow to the head during a brawl that pit Aidan and Josh against each other.

Sally’s decisions have undoubtedly changed the future and this narrative direction might cause concern. Clearly there are parts of this universe everyone can agree they’d rather not see stick. So where do we go from here and how do we, if at all, turn back the clock? With the announcement of Season 4 being the series’ last, every remaining moment we get from our favorite Boston roommates feels precious. This is exactly why “Rewind, Rewind” was such an appropriate follow up to news. Not only was it a well played crescendo of throwback plot and emotion, but proved that the thing all our “monsters” have been doing for three years wasn’t for nothing.

That certain brand of glue in their regular universe dynamic may not have always led to the best decisions, the least death or even avoided heartache. But every slip up, mistake and regret wasn’t proof of our characters being repetitive monsters incapable of growth. Rather, it shined a light on people trying and actually getting it right. It’s not about being normal, having the correct answers, never hurting anyone, or feeling happy all the time. It’s about making the most of what you have and who you have do it with. No matter how hard we try to control it life can get bitterly cold. Sometimes the best we can do is cling to the people we can claw our way out of the dark with.